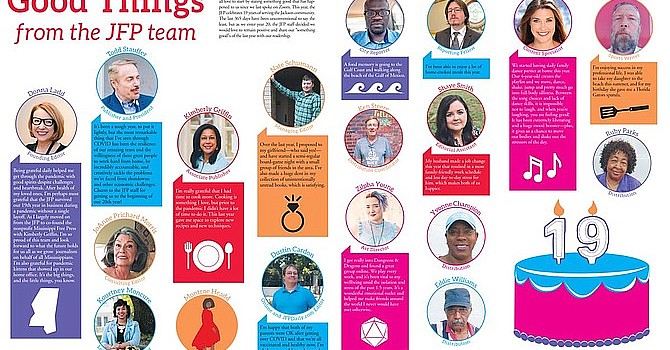 Good Things from the JFP Team 2 weeks ago

It will take a city-wide cleanup effort to move the needle against the menace of illegal dumping in Jackson, Solid Waste Division Manager Lakesha Weathers told the city council at its meeting on Tuesday, Sept. 14.

Dockers recently featured Roderick Little, director of bands at Jackson State University, in the most recent entry of its "Recognize" storytelling series, which features regular interviews with African Americans who have had a profound influence on their local communities.

Mothers-to-be are at an inherently higher risk of complications due to COVID-19 infection, leadership from the Mississippi State Medical Association said at a Sept. 10 press briefing aimed at promoting vaccination in expectant moms.

Physicians who spread misinformation about COVID-19 in person or on social media may have their medical license suspended or revoked after a strong statement from the Mississippi State Board of Medical Licensure.

Repeat Street, a Ridgeland consignment store specializing in contemporary and vintage clothing, furniture and accessories, remodeled its second building and turned it into a new clothing store called Rethreads on Tuesday, Sept. 7.

Jackson State University opened the 2021 season against Southwestern Conference newcomer Florida A&M University. The Tigers and the Rattlers faced off in the Denny’s Orange Blossom Classic in Miami Gardens, Fla.

College football returns with a full slate of games this Saturday in what is considered week one of the season. Last Saturday, a handful of games were played on what is called week zero on the schedule.

The New Orleans Saints are starting the 2021 season without Drew Brees since he retired after the 2020 season, leaving a major hole in the Saints’ offense as the franchise tries to replace the future Hall of Fame quarterback.