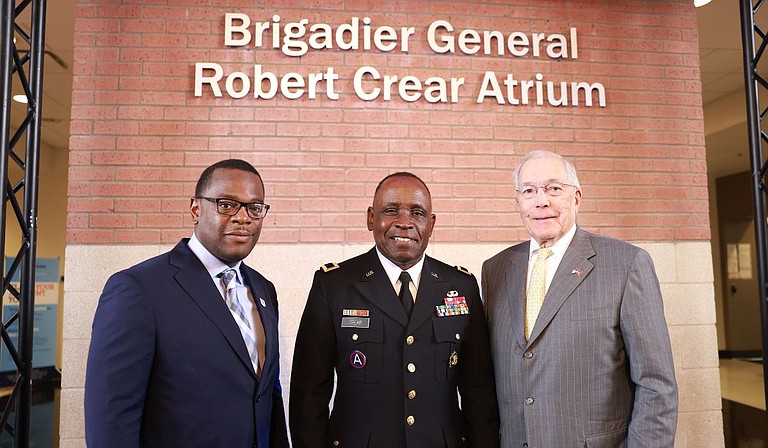 John Nau, president and CEO of Silver Eagle Distributors, L.P., contributed $1 million to JSU as part of the atrium dedication. Crear and Nau serve together on the Friends of the Vicksburg National Military Park Board of Directors.

JSU will use the funds Nau donated for scholarships for students majoring in science, technology, engineering and math, including those enrolled in JSU’s ROTC program, a release from the university says.

Crear is chairman of Rye Development, which develops new hydroelectric power sources for existing dams in the United States. Crear is also president and CEO of the Crear Group LLC, a governmental relations and business development consulting firm in Vicksburg. Crear also organized and served as Commander of Task Force Hope, the Corps of Engineers’ $14.6 billion infrastructure recovery and restoration effort in Mississippi and Louisiana after Hurricanes Katrina and Rita.

Jackson State University recently received a $50,000 donation from alumnus Joe N. Tatum, an attorney with 25 years of experience, for the College of Business to provide students with the concrete life skills necessary to function within the business world, a release from JSU says.

He later received his Juris Doctorate from Mississippi College School of Law, where he received the American Jurisprudence Award in secure transactions. Tatum was also a Fredrick Douglass Moot Court Semi-Finalist and served on the Moot Court Board.

Based in Vicksburg, ERDC is the research unit of the U.S. Army Corps of Engineers. In 2014, MSU and ERDC partnered to create the Institute for Systems Engineering Research, which is also housed in Vicksburg. MSU and ERDC collaborate on high performance computing, materials science, military engineering, autonomous systems, cybersecurity, artificial intelligence and machine learning.

MSU launched a military engineering concentration in 2018, in part to help ERDC meet its training needs with a local academic partner, a release from the university says. MSU researchers are developing advanced materials and conducting autonomous vehicle modeling and simulation for navigation in cold environments.