An assistant chief says the police department in Mississippi's largest city is short-staffed, and recruitment and retention are big challenges.

The Mississippi Department of Archives and History is allowing the public to have access to additional papers from the late author Eudora Welty, including letters written by members of her family. 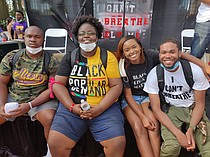 Working Together Jackson Time of Prayer and Press Conference

Following a shooting at Tree of Life Synagogue in Pittsburgh, Pa., local organization Working Together ...

State of the City Address

Attorney Martin Perkins speaks for three inmates in Hinds County Correctional Facility who have not been moved since the disturbance.

Jonathan Lee announces his candidacy for Jackson mayor. (Audio is muffled near the end.)

Sheriff Tyrone Lewis gives the media an update on the disturbance at the Hinds County Correctional Facility Monday afternoon.

Diane Derzis spoke with JFP reporter R.L. Nave outside the courthouse after the hearing. July 11, 2012.