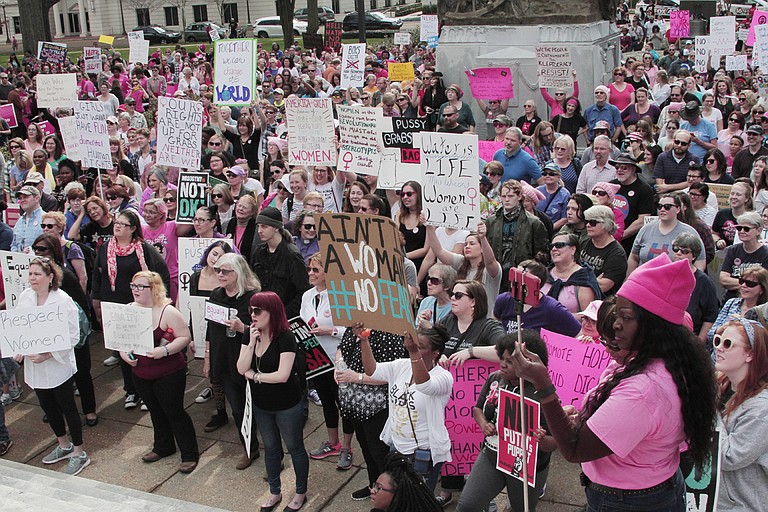 Hundreds of women, men and children marched in downtown Jackson on Saturday, Jan. 21, in a sister march to the Women's March on Washington, D.C., to advocate for women's rights. Photo by Arielle Dreher.

JFP Editor-in-chief and CEO Donna Ladd ended the Jackson Women's March at the Mississippi Capitol on Jan. 21, 2017, with this speech about the importance of independent media. Here is a transcript of her speech; you can listen to it here.

Hey y’all, how you doing? You know, I love a protest, I just want to tell you. There’s like nothing, nothing to me more American than this right here, and I don’t know abot you guys; I’ve been feeling so patriotic, and sometimes angrily so, over these last few months, in a way that I haven’t in a long time. This is exactly what I need to see today is all you guys out there exercising your First Amendment rights to say what you need to say.

In 1992 I was living in New York City, and I went to a big pro-choice rally in Washington, D.C.; I went there with a group of women from a newspaper I worked for there. We weren’t there to cover it; we were there to join women from around the nation who were standing up for our own basic rights.

The women I went with weren’t overtly political then, and they’re still my best friends up there now. We were young, and I’ll be honest, we were as into staying up all night drinking and stuff as we were into politics.

We called ourselves the “Babes for Choice.” We made hand-lettered signs and put lipstick kisses all over them, and we had the best time ever. The rental car even got broken into on our way there because I stupidly left my motorcycle jacket on the backseat. We just duct-taped that thing up and headed on to Washington.

From there, I became a more serious journalist over the years, and I covered a lot of protests and political gathers. I covered Clinton’s first convention in New York City including the protests that surrounded the building outside. I covered Bush II's inauguration in Philadelphia, the Republican Convention in Philadelphia (Pa), the Bush-Gore recount in South Florida for the Village Voice, protest after protest. For a while there that’s what I did, cover protests.

I covered the Iraq War demonstrations in New York City and those on behalf of the homeless and against police violence, and countless marches here in Mississippi’s capital city.

I believe in the power of protest. It is at the core of what makes America great—our First Amendment. If we do not have a free press, we cannot be free. It’s impossible. Right now in Russia, the citizens get most of their information from Russia Today and other state-owned outlets. We can’t go down that road.

When politicians refuse to sit down and answer questions from the press, as most Republican leaders right here in Mississippi do if they fear those questions will challenge them, we are not a free nation or a free state.

Under Trump there is already pushback against legitimate news organizations and any kind of challenging questions from the press, not to mention being made fun of by SNL.

The fact that Trump calls anything negative, or critical, “fake news,” even as his own cabinet members pushed actual fake news is a very ominous sign of things to come. And it doesn’t matter what party you associate with. I’m not a member of a political party; I’m a journalist.

I’ve been saying lately that the strategies used against serious, critical press in Mississippi, and have been since we started this paper 15 years ago, are now moving into the White House, and that really scares me.

Media matters, ladies and gentlemen. It matters who runs it, and it matters the decisions they make. I can probably count on one hand the number of women in newsroom management in the State of Mississippi.

Your voices matter to this state and this nation. It is easy for the world to assume that all Mississippians never question Donald Trump, never question Phil Bryant or his new buddy Nigel Farage of the United Kingdom.

Most of us must—the assumption goes—be in favor of limiting women’s rights and options, violating LGBT rights through HB1523 and other attempts, and limiting voter access for people of color however possible.

Too many people believe that the so-called “values” of the men at the top—Bryant, Trump, etcetera—speak for us all. All of us Mississippians.

I am here today to tell you that they are wrong. There are so many good, caring, faithful people in Mississippi who truly love their neighbors and celebrate differences—and in the 21st century we are willing to speak up about it, and we might live if we do.

But, y’all, this is on you really. Media, we can do what we do, and we will. We don’t practice access journalism.

This is going to require each of you to seize your platform and do your part, writing or talking to change your world. You have the power.

You must demand and support a better media that is not afraid to report facts, even if it makes one side or another look worse in a particular story. I pride myself on the fact that we piss off Republicans and Democrats regularly. It’s about facts.

Most real stories cannot be split down the middle. False equivalency in journalism is a very serious threat to our democracy. So is the desire not to offend a powerful leader so that a journalist can keep getting some access.

When we pretend to be “objective” by splitting stories down the middle with two Republicans on one side and two Democrats on the other and no real people in the story—and then we head out to happy hour—we are not practicing the kind of journalism that will protect and strength our democracy and freedoms for all.

In too many cases, we are giving liars equal coverage.

I am here to tell you that it is possible to do serious coverage without resorting to “access journalism” and without pulling the punches that need to be thrown.

Here’s the thing, ladies. You will get called names for speaking out, especially in our state. Your butt will be disparaged on blogs and on Twitter. Bloggers will lie about you incessantly. Some might even grab you and kiss you in public without permission and then send you half-naked photos of himself in email. (I’m speaking from experience here if you haven’t figured it out.)

Progressive men will quietly take you aside and say “you know, you’re being too loud” and “you shouldn’t challenge men in public quite that way.”

Men in public office will say you’re “hatin’” and over and over you’ll hear that you will only “be in business for six months because I’m gonna run you out of business.” I’ve been hearing that for 15 years.

They will spread rumors about you. They will link pictures of you and your friends to genital warts. They will get drunk and send you vicious emails because they didn’t like your reporting on a development project. They will do everything possible to turn people against you.

You need a tough skin to speak out if you’re a woman, or a man in this state who bucks the status quo. We must draw on the strength of loud women who have paved the way: Fannie Lou Hamer, Ida B. Wells, Hazel Brannon Smith, Coretta Scott King, Myrlie Evers, Gloria Steinem and, yes, Hillary Clinton. You don’t have to agree with every word these women said to understand that it took courage to say it.

The amazing news is that we are surrounded now with women ready and willing to speak out and men who will support you for doing to.

My office overflows with powerful women who use those voices—from associate publisher Kimberly Griffin to managing editor Amber Helsel to reporter Arielle Dreher who digs deep to tell you the whole story about HB 1523 or the Legislature’s frivolous attack on Planned Parenthood, which only does women’s health services and no abortions in our state, but is still under attack from the same conservative men who complain about frivolous legislation. That’s not right.

And then there are our young women like 15-year-old Maisie Brown who has given speeches from here to Washington, D.C., on the need to change the Mississippi flag and who now helps me run the Mississippi Youth Media Project to help even younger people find and use their voices.

To me, ladies, this is not partisan any more than the successful vote against Personhood was partisan in the state of Mississippi. You did that then; imagine what you can do going forward. This is about the need to help each other use and lift up our voices in a way that will change our world for the better and to let freedom continue to ring for every American.

You go, girls, and the men who support us grrls, G-R-R-L-S. Speak up loud and proud.