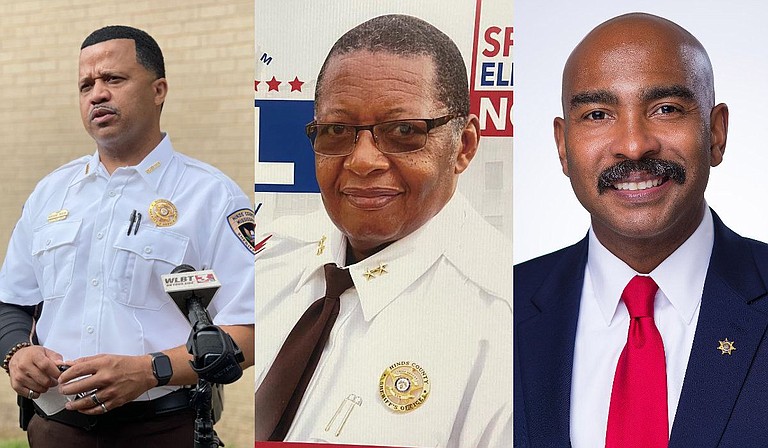 His death brought immediate changes to the office, with the supervisors appointing Crisler as the interim sheriff. Crisler took over the role of information officer for the office, and Jones continues as a captain over the investigations division. Wall, however, chose to retire.

Crisler has been in Jackson for 50 years, graduating from Provine High School in 1986. He earned an associate’s degree in criminal justice from Hinds Community College and an Associate of Science degree from the same school before earning his bachelor’s degree from Jackson State University in 1997, followed by a master's degree in public policy administration also from JSU.

Crisler began serving in the Hinds County Sheriff's department in 1992. "I started as a dispatcher, worked my way up to an investigator and then sergeant in investigations in the narcotics division—did that up into 2009 when I retired," the interim sheriff said in a Sept. 13 interview with the Jackson Free Press. He graduated from the Mississippi Law Enforcement Officers Training Academy, Pearl.

He also served two terms on the Jackson City Council. "Six years of those eight years, I was the council president," he said.

The candidate touted his experience managing a $300-million budget as a member of the City's legislature. "I also served briefly as a district director of dropout recovery for Hinds Community College where I had a $6-million budget with that particular program and managed that for five years," Crisler added.

In 2014, under former Mayor Tony Yarber, he became deputy chief administrative officer and the public safety commissioner for the City of Jackson with oversight over the Jackson Police Department and the Jackson Fire Department. "I got promoted to the chief administrative officer, second to the mayor, where again I managed a 300-plus-million-dollar budget," he added.

As the City's public safety commissioner, he said that the crime rate dropped.

"I've been teaching in all of those institutions of higher learning since 2003," he said.

He said his focus as sheriff will be safety and spoke on an ongoing plan to set up a gun-suppression unit to rid the county of illegal guns, which he announced in September. He also mentioned increasing law enforcement visibility.

"So one of the things I've already begun to do is put strategic plans together to try to curb violent crime in the city," Crisler said. In a Facebook post, he listed satisfying all requirements of the current Department of Justice consent decree and refurbishing the Hinds County Detention Center among his priorities.

He told the Jackson Free Press that he will lobby to have those convicted of a crime get reduced sentences if they obtain a GED or a trade vocational and technical degree certificate while incarcerated.

"So when they leave the jail, they have a skill set that can assist them in making a living wage. Therefore they won't be tempted to come back into the prison system again," he said.

Wall came into the sheriff's department during Vance's tenure. In a statement to the Jackson Free Press, he mentioned the different improvements he witnessed when he was chief deputy of operation for 20 months.

"Upon coming into office in January 2020 under Sheriff Lee Vance, our administration found that the HCSO averaged only (two) officers per shift assigned to patrol 877 miles. (We also saw) no narcotics unit, a command staff in complete disarray, a detention-services staff with no clear direction of complying with DOJ Civilian and certified staff in a state of hopelessness," he wrote.

His accomplishments include having a fully staffed narcotics unit with K-9, seizing over $1 million and removing dangerous weapons from the streets of Jackson.

"(We) created a disciplinary review committee so that all employees would receive fair and impartial disciplinary action and filled all administrative mandated DOJ positions in detention services," he added.

He spoke on his priorities if elected on Nov. 2. "Currently, the jail is operating under a consent decree. My administration will focus on meeting all stipulated orders set forth by the DOJ, and in meeting that objective, it will move us closer to coming from under the consent decree," he wrote.

"(Hinds County Detention Center) will require a great financial commitment over a sustained period of time. The financial commitment will require repairs to the infrastructure of the facility, substantial pay increase for detention officers, revised medical evaluations and treatment for (seriously mentally ill) detainees, immediate and direct response to (Prison Rape Elimination Act) violations," he said.

"(I will) carry out the dream of Sheriff Lee Vance to (have civil-service protection) for all HCSO employees in order to protect jobs for future administrations, purchase vehicles (and) equipment, and increase in-service training for all employees," Wall added.

Jones graduated from St. Joseph Catholic High School in 1996, studied at Tougaloo College and Belhaven University, and served 20 years as a Jackson Police Department officer, attaining the position of commander.

"During (my) tenure with JPD (I) served in various divisions to include, patrol operations, DEA task force, robbery/homicide detective, patrol sergeant, investigations sergeant, commander of violent crimes division, public information officer and Swat logistics officer," he shared in a statement to the Jackson Free Press on Sept. 15. "During this time (I) received numerous awards for excellent work and leadership exemplified."

Sheriff Vance appointed him as captain in the criminal investigations division of the Hinds County sheriff's office in 2019.

Jones wrote that as sheriff, he will prioritize public trust through community policing and addressing the needs of the community through utilizing necessary resources.

"(I will address) the daily operations of the detention facilities and will continue to follow the guidelines according to the federal consent decree the HCSO is currently under, establishing a successful working relationship with the Hinds County Board of Supervisors as it relates to the budget and the essential needs of the Sheriff's Department," he added.