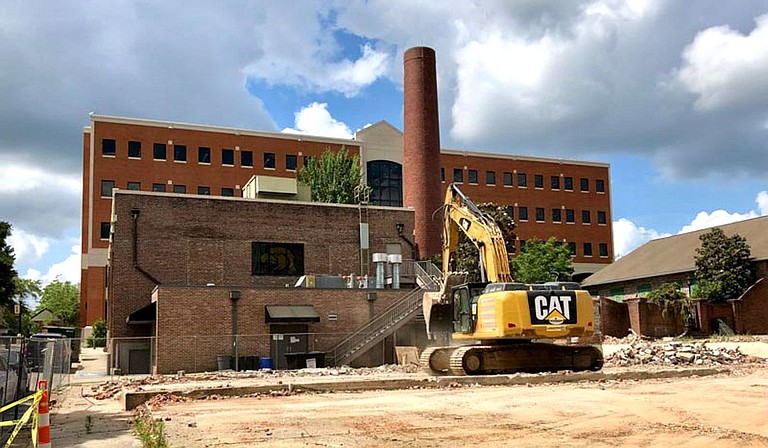 The University of Southern Mississippi has launched a series of construction projects to improve accessibility and mobility on its Hattiesburg campus, including a pedestrian pathway and additional parking. Photo courtesy USM

The University of Southern Mississippi has launched a series of construction projects to improve accessibility and mobility on its Hattiesburg campus, including a pedestrian pathway and additional parking. The projects are part of a long-term bike and pedestrian master plan that a USM committee developed in conjunction with outside engineers, a release from USM says.

Most of the construction is centered on the western edge of the campus with a focus on Montague Boulevard. USM began constructing the pedestrian pathway, which runs along the north side of Montague Boulevard from 38th Avenue to Ross Boulevard, after receiving a grant from the Mississippi Department of Transportation and the Federal Highway Administration. The grant will fund 80% of the $950,000 project, the release says.

As part of the construction, USM is demolishing the former Printing Center, which has not been in use for several years. When finished, the roadway will feature a single-lane extension that will run one-way, from east to west, behind the Power House Restaurant and will link Forrest Avenue to Montague Boulevard. The project will also include the addition of sidewalks and metered parking spaces. Construction is on schedule to conclude during the summer of 2021.

The planned 10-foot wide pedestrian pathway will run along the north side of Montague Boulevard from 38th Avenue to Ross Boulevard and is scheduled to be completed in October 2021.

USM is also constructing a new north campus gateway at the corner of West Fourth Street and North 34th Avenue, designed to resemble the Centennial Gateway at the Hardy Street entrance of the Hattiesburg campus. The project is scheduled for completion during fall 2021.

Also under construction are 280 new parking spaces in a lot at the corner of Montague Boulevard and Ross Boulevard. The project will include lighting, a sidewalk, curb and gutter and drainage improvement.

CSpire presents the PRAM Student of the Year Award, which honors students with a strong dedication to the public relations field and comes with a $1,000 scholarship. Professionals outside the geographical boundaries of the Southern Public Relations Federation, which includes Mississippi, Alabama, Florida and Louisiana, serve as judges for the awards.

The PBS network will feature research that undergraduate students and faculty in Mississippi State University’s Department of Anthropology and Middle Eastern Cultures conducted in an upcoming episode of the new PBS series “Mysteries of Mental Illness.” The four-hour documentary series, which will begin airing at 8 p.m. on Tuesday, June 22, traces the evolution of mental illness in science and society.

PBS filmed part of the second episode of the documentary series on MSU's Starkville campus in spring 2020. The segments feature MSU AMEC associate professor and graduate coordinator Molly Zuckerman and two undergraduate students who are conducting research on patients who died at the Mississippi State Asylum as part of the Asylum Hill Research Consortium.

The Mississippi State Asylum operated from 1855 to 1935. In 2012, workers discovered graves on the only remaining undeveloped part of the University of Mississippi Medical Center’s main campus in Jackson. The Asylum Hill Research Consortium formed after the discovery and aims to bring together scholars and community members to study and preserve remains exhumed from the asylum cemetery, a release from MSU says.

For more information on the “Mysteries of Mental Illness” series, visit pbs.org/wgbh/mysteries-mental-illness.