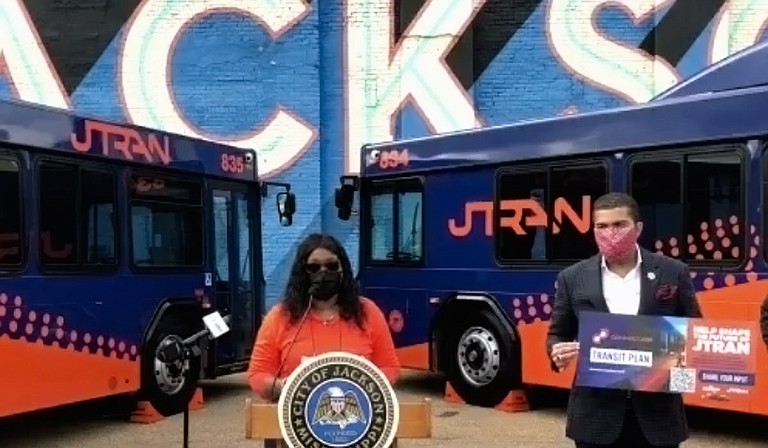 The City of Jackson is crafting new routes for its public transit system and is calling on the citizens to contribute to the process. At a press conference Monday, Mayor Chokwe A. Lumumba said that the move is part of repositioning JTRAN.

"Our transit route at this time is one which is outdated, which was created at a different time when the city had different priorities in different areas of heavy flow of traffic and priorities across the city," he said. "The single statistical variable that aligns with generational poverty is not actually education, it is not actually a number of things we believe it to be, it is actually commute time; It is people's ability to get to and from the places that they need to go."

The City unveiled two hybrid electric buses to add to JTRAN's fleet after adding two in June when it rebranded the public transit system and planned to add four new hybrid buses before the end of 2020, although they’re behind that timetable.

"This is two of four that we have presently, and we have more on the way," Lumumba said with the two new hybrid buses in the background. "And we are swiftly updating our entire bus system and bus portfolio.

"And part of that is to go forward with a transit study; we want the community to be engaged from the very onset so that we can learn from your experiences."

Director of Planning and Development Jordan Hillman said funding for the hybrid electric buses is $5.5 million from the U.S. Department of Transportation’s Low or No Emissions grant program, with an addition of eight hybrid buses over the next two years.

"We have also purchased 10 additional paratransit vehicles, three 25-passenger buses and seven 18-passenger accessible buses that we expect to arrive this year," she said. "We have now replaced over 50% of the JTRAN fleet since 2017.”

The new buses will help JTRAN meet its daily needs for 26 buses on routes, while replacing buses that are past their useful life, she said.

"One of the most exciting things we're going to get to do this year is our transit plan; we are announcing the launch of the Connect Jackson transit plan,” she said. "We've heard the challenges our users experience using a system that largely looks the same as it did 30 years ago."

Connetics Transportation Group is the lead consultant for the planning project, which ends Fall 2021 according to the website jtrantransitplan.com. Others consultants are Neel-Schaffer, Par Excelon Marketing and Advertising Group, Beyond Communication, Via Strategies and Urban Transportation Associates.

"The study is running alongside our city-wide comprehensive plan, and the results of both will be incorporated together to make decisions about how both our land-use decisions are made and our future transit routes look," Hillman said.

Deputy Director of Transportation Christine Welch said feedback from the community is vital to the process and JTRAN encourages community participation. "Your feedback is crucial to ensure that we get it right," she said. "There will be many opportunities to provide input throughout the course of this study; our outreach events will include public meetings, surveys and they will be posted periodically (on) the website along with the city's social-media accounts."

Welch said that JTRAN makes about 40,000 trips per month with 4,000 paratransit trips. "The paratransit is the door to door service, where we transport persons with disabilities," she said.

Lumumba explained the importance of public contribution to the study. "It is akin to not wanting to scratch where people aren't itching," he said. "We want to get to the root of what people need most; we don't want just shiny new buses; we want a nice route that actually accommodates the needs of our residents."

"Often, we complain about how things don't fit our needs, how it doesn't seem to align with the concerns of the community," he added. "Right now, we are calling on the community to participate in this.”