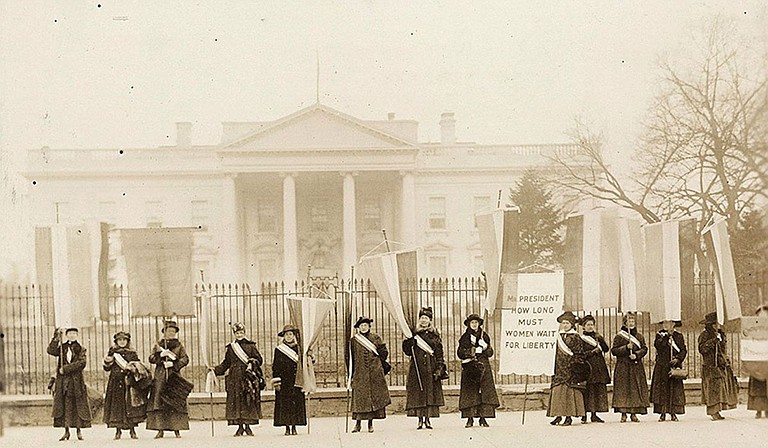 "Votes for Women! A Centennial Celebration of the Women's Suffrage Movement in America" includes 11 poster-sized panels depicting the movement's history with a focus on Mississippi, a release from MSU says. Photo courtesy Library of Congress, Prints and Photographs Division

Mississippi State University recently announced that it will commemorate next year's centennial anniversary of the 19th Amendment and the women's suffrage movement with a special fall semester exhibit at the MSU Libraries.

Ratified in 1920, the 19th Amendment granted all Americans, regardless of sex, the right to vote. Mississippi was the last state to officially ratify the legislation in 1984. The 19th Amendment's centennial anniversary is on Aug. 18, 2020.

"Votes for Women! A Centennial Celebration of the Women's Suffrage Movement in America" includes 11 poster-sized panels depicting the movement's history with a focus on Mississippi, a release from MSU says.

Jenifer Ishee, digital archivist and coordinator of Mitchell Memorial Library's Digital Preservation and Access Unit, curated the exhibit. Her research on Alma Dorsey Birdsall, a Yazoo City suffragette and vice president of the Mississippi Woman Suffrage Association, sparked her interest in the project, the release says.

The exhibit is on display in the Louis Burns Brock, Jay Brock, and Hank Brock Gallery on the first floor of MSU's Old Main Academic Building. The gallery is open from 7 a.m. to 11:45 p.m. Monday through Thursday and from 7 a.m. to 7:45 p.m. on Fridays.

MSU Libraries also plans to display "Votes for Women!" at Mitchell Memorial Library as the 2020 commemoration approaches, the release says.

CREATE, which stands for Chevron's Reaching Excellence, Accelerating diversity & inclusion and Transforming Engineers, is part of a larger effort on Chevron's part to support STEM education in pre-kindergarten through 12th grade and through university partnership programs, a release from MSU says.

Chevron officials presented MSU with a $400,000 check during a visit to launch the program. The company previously donated $300,000 to the Engineering on the Coast program in 2015 and has invested more than $4 million at MSU since 2007, the release says.

Jackson State University alum and actress Tommie "Tonea" Stewart will be the fall 2019 speaker for JSU's graduate and undergraduate commencement on Friday, Dec. 6, at 10 a.m. in the Lee E. Williams Athletics and Assembly Center.

Stewart earned her undergraduate degree in speech and theater from JSU in 1969 and later received a master's degree in theater arts at the University of California at Santa Barbara. She is also the first African American woman to receive a doctorate in theater arts from Florida State University.

She is also a former Miss JSU and a retired tenured professor and dean of the College of Visual & Performing Arts at Alabama State University.

Stewart's roles include "Aunt Etta Kibbe" on "In The Heat of the Night" and "Old Cora" in an episode of "American Horror Story." She has also appeared in the films "Mississippi Burning" and "A Time to Kill," for which she received an NAACP Image Award nomination.

In 2018, Stewart appeared in a Netflix drama based on Carlton Pearson, the former pastor of Higher Dimensions Family Church in Tulsa, Okl., who the Joint College of African-American Pentecostal Bishops branded a heretic in 2004 for views that went against evangelical fundamentalist beliefs.

Stewart has also operated a summer youth camp that offers professional training in the performing arts for more than 25 years.