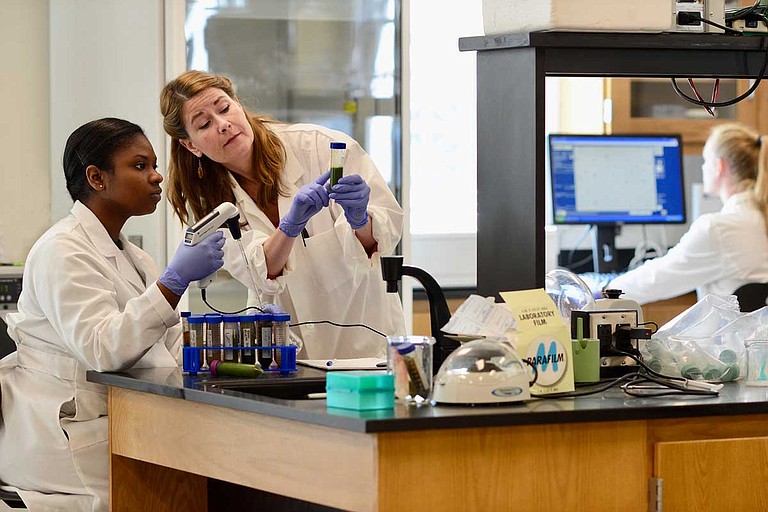 Belhaven University recently announced that Elizabeth Brandon (center), an associate professor of biology at Belhaven, and a team of student researchers have made discoveries in their research in using kale to help combat cancer. Photo courtesy Belhaven University

Belhaven University recently announced that Elizabeth Brandon, an associate professor of biology at Belhaven, and a team of student researchers have made discoveries in their research in using kale to help combat cancer. The team unveiled preliminary data that suggests a low concentration of kale juice can kill HepG2, a type of liver cancer cell, a release from Belhaven says.

Brandon has been conducting plant-related cancer research for 10 years. She and other biologists have also studied the effects of kava plants, mimosa bark, green tea, pomegranates, blueberries and other plants on cancer cells. Belhaven's researchers are focusing on using chemical extracts from plants in their natural forms rather than creating compounds from them, the university's release says.

Researchers began the kale experiments at Belhaven by growing cancer cells in petri dishes, and exposing them to extracts and whole juices that the researchers obtained from plants through processes such as boiling them.

The team plans to make information available to the public whenever it finds plants that kill or slow the growth of cancer cells, the release says. 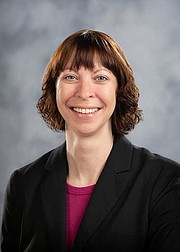 Sociologists for Women in Society, a nonprofit organization that supports feminist sociological research and activism, recently awarded Laura Jean Kerr, a doctoral student in Mississippi State University's department of sociology, with its 2019 Beth B. Hess Memorial Scholarship Award. Kerr will accept the award during the August 2019 SWS awards reception in New York City.

The organization established the award, which is named for one of its former presidents, in 2005. The $18,000 scholarship goes to graduate students who began their studies at the community college level; have established research regarding social inequality, social justice or social problems; and are actively working on a dissertation and seeking a career in teaching.

Kerr, a native of Ontario, Canada, who is living in Meridian, graduated from Meridian Community College in 2000 with an associate's degree in social work. She received a bachelor's degree in psychology from the University of Southern Mississippi in 2003 and then returned to MCC to work as a career assessment coordinator. She later received a master's degree in sociology from MSU in 2010 and is working toward receiving her sociology doctorate in 2020.

Her dissertation at MSU is about food insecurity among community college students in Mississippi, a release from the university says. Food insecurity refers to not have reliable access to a sufficient amount of affordable and nutritious food. Kerr's research involves measuring how common food insecurity is among students, examining its relationship to academic progress or attainment and looking into potential policy solutions, the release says.

The City of Jackson's Department of Human and Cultural Services recently made a $10,000 grant to support the creation of a public sculpture walk in the city's midtown neighborhood. Millsaps College's ELSEWorks program, which works to engage students in entrepreneurship in midtown, matched the grant with a $10,000 donation of its own.

Millsaps and the City are partnering with the Mid-South Sculpture Alliance to bring in sculptors to build contemporary sculptures in a new public park in midtown by spring 2020, though the specific location in the neighborhood is not available. The sculptures will be on display for one to two years and then be rotated out to make room for new ones, a Millsaps release says.

Kristen Tordella-Williams, assistant professor of studio art at Millsaps and vice president of the Mid-South Sculpture Alliance, will also work to bring in other art, installations and programming related to the sculptures.

Additionally, the college announced that it will offer educational opportunities related to the sculpture walk for midtown residents in the Windgate Visual Arts Center on the Millsaps campus.