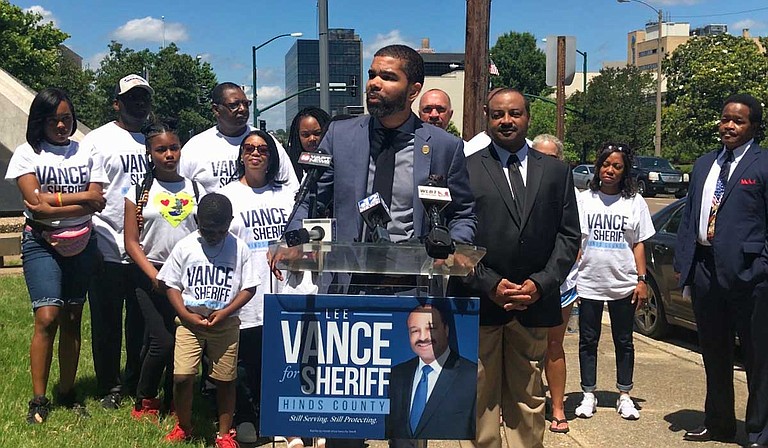 Supporters of Hinds County sheriff candidate Lee Vance wore white t-shirts promoting his campaign as they stood behind Mayor Chokwe A. Lumumba outside the Hinds County courthouse today as he endorsed his former police chief for the sheriff's job.

"I do this out of a lot of thought, understanding that we need someone who not only has the experience and the ability to lead our city, but someone who has a true compassion for our city," Lumumba told the press.

The former police chief is challenging incumbent Victor Mason, who has met a fair amount of controversy during his sole term as sheriff to date, including sexual-harassment lawsuits settled earlier this year. Mason also recently faced prostate cancer, but says that he is now cancer-free.

Ceasefire in the City?

How Police Can (and Cannot) Deter Gunfire

Probably Mason's best-known challenger, Vance spent 30 years with the Jackson Police Department after growing up on Wood Street. "I started school when schools were still segregated, went to Mary C. Jones Elementary School," he told Jackson Free Press editor Donna Ladd during a May 2016 one-on-one interview at Millsaps College. "When we went home for Christmas for my sixth-grade year, they started the integration process, and I ended up finishing my sixth grade year at Galloway." He attended Lanier High School and later Jackson State University.

In JPD, Vance moved up in the ranks from patrolman to assistant chief of police to the police chief before retiring in December 2017, just months into Lumumba's administration soon after JPD signed on to work with the controversial Project Safe Neighborhoods, a George W. Bush-era strategy to target gun violence that drew charges then of disparately targeting black men. Vance stood to U.S. Attorney Mike Hurst's right as he announced the program earlier that same month.

Still, Trump's first attorney general, Jeff Sessions, brought the program back, and Jackson was one of the earlier sites, drawing criticism from many criminal-justice reformers in and outside the capital city, as well as this newspaper. The City of Jackson has continued to participate in the program, spearheaded locally by U.S. Attorney Mike Hurst, past both Vance and Sessions no longer being in the same positions.

However, the new Democratic majority in the U.S. House of Representatives is concerned about Project Safe Neighborhoods and is attempting to roll back its funding in Congress. The Crime Report in New York reported last week that the House Appropriations Subcommittee on Commerce, Justice, Science and Related Agencies moved to defund the program for its budget year beginning Oct. 1.

U.S. Attorney Hurst did not return a message this week seeking comment on the U.S. House effort to defund the program.

Called Project Eject in Jackson, the program has coincided with a year-and-a-half of dramatic hikes in homicides in Jackson. Lumumba is on his third police chief of his administration.

Focusing on the Positive

Under Vance's administration, he emphasized at the press event today, the Jackson Police Department was accredited and saw a reduction in crime in Jackson.

"It's my belief that Chokwe Antar Lumumba's endorsement is a very coveted one, and it's going to be a huge boost to our campaign as we seek to become the next sheriff of Hinds County," Vance told the press of his former boss.

Vance said his decision to run was based on his love for the city and the community, as well as his abilities for team building. "If you love your community and you claim to love it, you got to be able to go to work for it. You need to hitch onto the wagon because it's going to take everybody working together."

Lumumba said he is confident in his choice.

Vance told the Jackson Free Press he wants to make Hinds County a safer place and to bring the community together.

"I despise the fact that there are people walking around my home that are afraid. So we have to provide an atmosphere for safety, so if you feel like going out to a fast-food place, you're not worried about getting back home," he said.

Tackling 'Erosion' of Trust in Community

Vance emphasized that change won't happen overnight and that it will take a team effort. He also believes transparency between law enforcement and the public is essential in facilitating change in Jackson.

"Everything that we do, there is no reason why we can't know about it as a member of the press or as a citizen of this county," Vance said.

"I think that the citizens of Jackson should know and be aware that as someone who has the 30,000-foot view of everything happening in the city, that I'm choosing someone that I know can get the job done," Lumumba told the press.

Vance would be rejoining local law enforcement in a time when the City of Jackson has also seen a spate of officer-involved shootings, drawing calls from this newspaper to identify those officers sooner to help rebuild public trust, especially in black communities where most police-involved shootings occur.

In 2016, Vance told Donna Ladd bad policing causes "an erosion" between the community and the police. "Those things don't have anything to do with enforcement," he said of excessive, disrespectful and even violent policing. In those cases, he said, "institutional control is not what it should be, in my opinion." He added, "When you have that many types of incidents to occur, it should be a no-brainer that you're not going to be in touch with the community."

As Jackson police chief, Vance usually held weekly COMSTAT meetings that were open to the public. (The current JPD has hosted the meetings inconsistently, now saying they are once a month on the 15th in police headquarters.) The meetings were more jovial than such accountability meetings often are in larger cities such as New York City where they originated as a way to put officers in the hot seat over crime increases, with lots of laughing by cops in attendance in Jackson and not a lot of pushing by command staff, at least under Vance.

However, Vance said in 2016, accountability was a strong priority for him. "We talk about this stuff weekly, daily, in roll calls," he said of the need not to escalate an arrest into a violent situation. "Don't get the wrong impression: We're going to enforce the law (but) a violent episode doesn't have to occur every time you arrest somebody. As police administrators, it's up to us to say, 'This is how we're going to operate. If you don't want to operate like this, you should probably go somewhere else.'"

The chief said in 2017 that police must work to repair distrust in black neighborhoods of police of all races. Before the 1980s-era police beating of Rodney King, a black man, was captured on video, intimidation was one of the law enforcement's go-to tools. As a young man, he knew that policing needed to change.

One on One: Chief Lee Vance

Vance likes to talk about "community policing," which he defines as his officers being seen out in Jackson doing more than just issuing tickets and arresting individuals without rudeness or disrespect—even as Jackson has long experienced those problems, including in the last year.