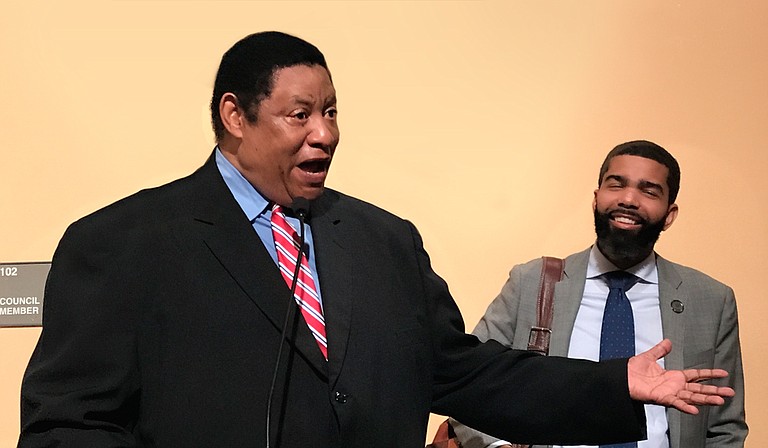 Mayor Chokwe Lumumba (right) is all smiles as Councilman Kenneth Stokes of Ward 3 (left) speaks to those assembled at the May 14 Jackson City Council meeting. Photo by Donna Ladd.

Ward 3 Jackson City Councilman Kenneth Stokes removed his glasses as Council President Melvin Priester Jr. of Ward 2 announced the body would be going into an executive session—its second of the day during its last meeting on May 14.

"Discussion?" Stokes asked. "If we need to go in litigation, can we hold this until the next meeting, so we'll have time for everyone to discuss it?"

The group voted Stokes' suggestion down 7-1, and the council members and mayor broke off to discuss litigation in the investigation of the Siemens Inc. water-billing contract. While the council addressed other issues such as amending the fee for the Smith Robertson Museum and Cultural Center on Bloom Street, the discussion surrounding a contingency plan with Birmingham law firm Lightfoot, Franklin, & White to pursue litigation claims against Siemens took up most of the city council meeting on May 14.

The water-billing contract has plagued the City of Jackson through multiple mayoral administrations due to the ineffectiveness and cost of the contract, with much of the work delegated to local subcontractors. The debacle—with Siemens and the City pointing at each other—led to many customers not getting water bills or being billed incorrectly for more than a year, causing serious shortages in City revenue.

Stokes made an amendment to make Gibbs & Travis law firm a whereas clause in the packet the council was discussing. Mayor Chokwe A. Lumumba opposed this amendment.

"To be clear, the reason that I reject that amendment is because of looking at the legal issues and whether there could be a potential conflict based on their form of representation in a Siemens lawsuit," Lumumba told the council members.

In 2012, the City contracted Siemens for $90 million to replace old water meters with new ones. Siemens reported the project completed in 2018. The City says the contract with Siemens was unfulfilled, and there is a possibility they will move forward with a lawsuit against the corporation.

After two executive sessions, the council decided to hire Lightfoot, Franklin, & White LLC to investigate a lawsuit against Siemens.

In 2015, Monticello, Ark., sued Siemens for $6.7 million due to similar issues with its water system. The City had a $10-million contract with Siemens, and paid $6.7 million before the project began. Eventually, Siemens settled the case, and Monticello received $4.6 million back.

The council voted for the Department of Parks and Recreation to move two Spanish-American artillery pieces from Battlefield Park in Jackson to the Mississippi Armed Forces Museum in Hattiesburg.

Lumumba said that due to weathering, the cannons have been deteriorating. He also said that they were in the wrong place, as they are relics of the Spanish-American War, not the Civil War, which saw several battles in and around Jackson, leaving the City burned repeatedly and earning it the nickname "Chimneyville."

"I understand they are going to put upwards of a quarter of a million dollars in restoration and preserving and protecting these pieces, and they will be at the museum for all to see," Ward 7 Councilman Virgi Lindsay said.

At the same meeting, the council honored Pastor Barron Banks, Hilda Jean Wansley and Roosevelt Catchings for their work in the Jackson community.

"I'm asking and challenging all of us to get some hands and walk down through these streets and these communities. Let's hold hands together," Banks said at the meeting. "We don't have to sit in these seats to make some changes.

Wansley was a clerk typist for the City of Jackson, Wastewater Treatment Plant and the Jackson Zoological Park. She has also worked for the Jackson Public School District as a clinical administrative assistant to the medical director and executive administrative assistant to the CEO of Jackson Hinds Comprehensive, Dr. Jasmin Chapman. Her awards include several citations of honor and customer-service workshop awards, and Jackson Hinds Comprehensive Employee of the Year.

"It's been a long journey, but God has been with me through it all," Wansley said at the meeting.

Catchings was a former campus security office for Jackson State University from 1971 until 1993. He also owned his own business, Metro Car Wash. He died in April of this year; his wife, daughters and nieces represented him at the council meeting.

Assessors from the Mississippi Law Enforcement Accreditation Commission will conduct an on-site assessment of the Jackson Police Department on Tuesday, May 28, and Wednesday, May 29.

The department must comply with 140 professional standards for accreditation. After the review, assessors will send a report to the accreditation commission, which will make an accreditation determination.

Livingston Road Bridge has been closed per recommendation of the Mississippi Department of State Aid Road Construction. The closure is based on structural deficiencies following an inspection.

"The Department of Public Works will review the structural deficiencies provided in the report and determine the best method of repair to reopen the bridge to traffic," a press release from the City of Jackson said this week.

The bridge will be closed from Fairfield Drive to Post Oak Road for a minimum of 12 months depending on availability of funds to repair it. Drivers should watch for detour signs and traffic barriers. The bridge should not be crossed due to structural issues, the State warns.