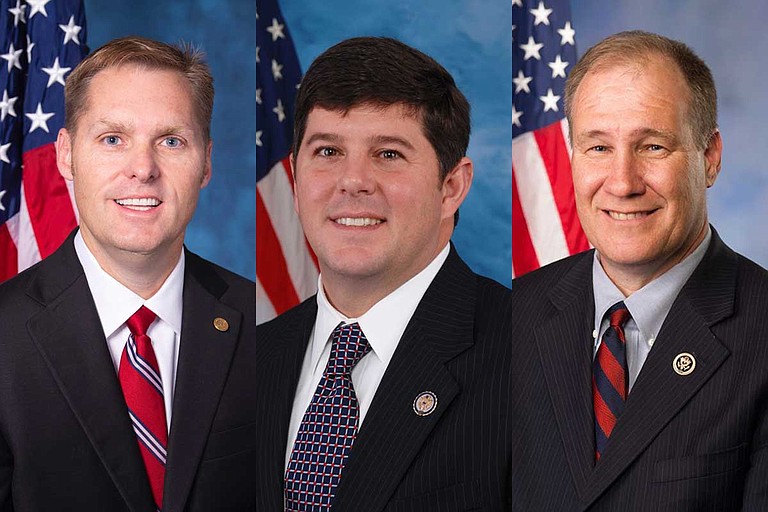 All three congressmen from Mississippi voted against the Equality Act, which would extend protections under the 1964 Civil Rights Act to LGBT people. Photo courtesy Mississippi Senate

In summer 1964, Mississippi Congressman John Bell Williams, who would later serve as his state's governor, went on air with the Citizens Forum to lambast the Civil Rights Act, which the U.S. House had just passed.

"The civil rights bill which is presently before the Senate is the most monstrous piece of tyrannical legislation ever considered by the Congress," the Dixiecrat told the host, whose program was put on by the racist, pro-segregation Citizens Council. President Lyndon Johnson signed the bill into law shortly after, and Mississippi made Williams governor three years later.

Old times for some Mississippi congressman are not forgotten, though, and current U.S. Rep. Steven Palazzo, a Republican who represents Mississippi's 4th District, hearkened back to some familiar hyperbole on Friday as he blasted the Democratic-controlled Congress for passing the Equality Act.

"The legislation that came before the House today is possibly the most invasive threat to our religious liberties this Congress," he railed in a press release after the vote this morning. "The title of this bill is misleading. Instead, it furthers inequality across the board. Mandating someone to abandon their deeply held religious beliefs to conform to the liberal mindset is demoralizing."

But Adam Polaski, the director of communications at the Campaign for Southern Equality, or CSE, pointed out to the Jackson Free Press that the Equality Act simply updates the 1964 Civil Rights Act to include sexual orientation and gender identity in its protections when it comes to housing, education, employment and other forms of discrimination.

"It's important to protect religious freedom, and I don't think anyone is arguing with that. It's already protected by the First Amendment," Polaski, whose North Carolina-based organization fights for legal protections for LGBT people across the South, including in Mississippi.

"It's about protecting people from discrimination. It's about ensuring that people can show up to work as their full selves," he said. "It's about ensuring that people can find a home and find a place to live without fear of being turned away or evicted. So I think it's easy to get wrapped up in kind of scaring people about what the Equality Act is about, but at the end of the day, it's about supporting people to live their lives and be their most authentic selves."

Under the 1964 Civil Rights Act, Polaski said, people of faith already have the same guarantees of protection from discrimination as the Equality Act would grant to LGBT people.

"People can still obviously practice their faith, and that's not going to change with this bill," he said. "This bill just means that, if you are an LGBT person and you have a job or you show up at a business, you should be able to be treated the same way as everyone else, and you shouldn't be able to be turned away or fired or evicted because of this part of yourself, in the same way you shouldn't be turned away because of your Christian faith or any other belief. We don't support anyone being fired or evicted because of their faith, either."

One faith leader who supports the Equality Act is Brandiilyne Mangum-Dear, a married lesbian woman who is the pastor of Joshua Generation Metropolitan Community Church in Hattiesburg, Miss. She shared with the Jackson Free Press on Friday a message for opponents of the equality act like Palazzo.

"In the eyes of religion, Jesus was a sinner and accused of breaking the religious law, and those that oppose this legislation would have turned him away, too," she said.

"Just because you have never experienced racism, sexism, homophobia or any other form of discrimination doesn't mean that you shouldn't stand on the right side of justice and basic human decency. Don't be blinded or desensitized by your religion. Just be kind. We shouldn't have to make laws for this. Just don't be an ass. It's simple, really."

On Friday afternoon, Thompson press secretary Ty James told the Jackson Free Press that the congressman, who is the only African American in Mississippi's delegation, voted for it because "he feels like you shouldn't be able to discriminate against anyone."

"The same people who are against this bill are the same kind of people who were against the Civil Rights bill, and (in 1964), they cited some of the same reasons for opposing protections based on race as they are citing for this now," he said. "We are also living in a time now where people are using their so-called religious beliefs to impose discrimination on others, and to justify (discrimination). Most of this isn't new. Most of these arguments against progress are old arguments."

In 2014, Mississippi Gov. Phil Bryant signed the state's Religious Freedom Restoration Act, which many LGBT groups opposed because they said it legalized discrimination against people based on sexual orientation and gender identity. In 2016, the Legislature passed and Bryant signed HB 1523, or the Religious Liberty Accommodations Act, which grants businesses the right to refuse to render services if doing so conflicts with their religious beliefs about same-sex marriage, pre-marital sex or gender identity.

CSE sued the state in 2016 to stop HB 1523. Although a federal judge in Jackson initially ruled it unconstitutional, the conservative Fifth Circuit Court of Appeals in New Orleans overturned that ruling and upheld it. The U.S. Supreme Court refused to hear the case, and the law took effect in January 2018. Mangum-Dear was a plaintiff in that case.

Palazzo has a long history of opposing LGBT rights. He opposed the 2010 repeal of "Don't Ask, Don't Tell," which ended prohibitions on openly gay military servicemembers, and he opposed the 2015 court ruling that legalized gay marriage, saying that the decision "tears at the very fabric of our democracy by setting an alarming precedent for the future of states' rights."

In the 1950s and 1960s, civil-rights opponents often cited concerns about the erosion of "states' rights" while making arguments against federal laws designed to end state discrimination against African Americans, especially as practiced in the Deep South. Proponents of slavery also invoked states' rights to justify their fight in the Civil War.

"State sovereignty and states' rights were phrases often used to mark resistance to civil-rights advancements in terms of federal legislation," Stephanie Rolph, a Millsaps historian who focuses on the South's history of segregation and its opposition to civil rights, told the Jackson Free Press in March.

The Jackson Free Press reached out to Palazzo's office for comment Friday, but had received no response at press time.

CORRECTION: In the original version of this story, we reported that Brandiilyne Mangum-Dear said, "those that support this legislation would have turned him away, too." She actually said, "Those that oppose this legislation." We also misspelled Brandiilyne. The Jackson Free Press apologizes for these errors.