Mississippi Judge a Thorn in Kavanaugh’s Past 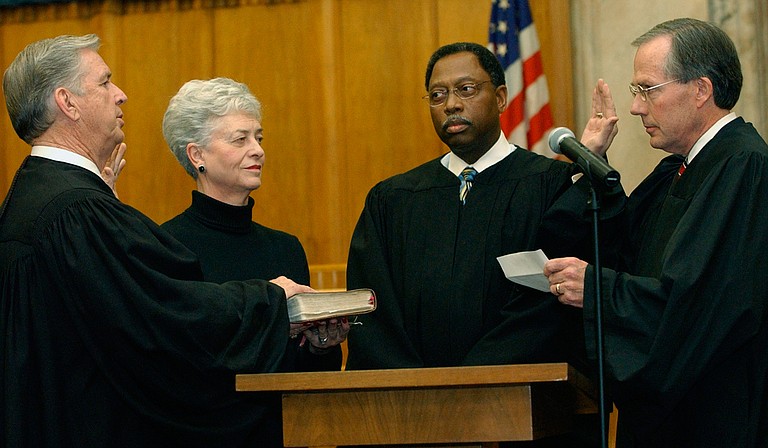 Charles Pickering, left, recites the oath of office, as he is sworn on to the 5th U.S. Circuit Court of Appeals on Friday, Jan. 16, 2004, at the federal courthouse in Jackson. Giving the oath is fellow Appeals Judge Rhesa Barksdale, right, while Pickering’s wife, Margaret Anne Pickering and Judge Henry T. Wingate watch. AP Photo/Rogelio Solis

The Mississippi judge faced criticism not only for pushing for a more lenient sentence for a convicted cross burner in the 1990s, but for his past ties to segregationists and other allegations of racism.

"Any luck on submitting Judge's op-ed?" Kavanaugh wrote in an email to President George W. Bush's White House spokeswoman Ashley Snee. "We just continue to take it without any meaningful Administration response." "Judge" referred to Alberto Gonzales, the White House counsel, under whose name a pro-Pickering op-ed should've already been published.

Now, some current and former senators say that email, along with others, suggests Kavanaugh—now President Donald Trump's nominee to the U.S. Supreme Court—may have lied under oath in 2006 about his role in promoting Pickering.

In 2006, President George W. Bush nominated Kavanaugh to the D.C. Circuit Court of Appeals. During Kavanaugh's confirmation hearings before the U.S.  Senate, Kavanaugh told then-Sen. Russ Feingold, D-Wis., that Pickering was "not one of the judicial nominees I was primarily handling."

Emails released in August and September of this year from Kavanaugh's time as a White House attorney show he sent dozens of emails to fellow staffers about Pickering and that he not only helped with research and strategy on the nominee, but was the ghostwriter of the Gonzales op-ed.

In a Sept. 17 op-ed after the second batch of emails were released, Feingold, who left the Senate in 2011 after losing his bid for re-election, pointed to the emails as "clear evidence showing that Kavanaugh lied under oath during the 2006 confirmation hearing for his spot on the U.S. Court of Appeals for the D.C. Circuit."

Sen. Dianne Feinstein, D-Calif., made similar comments after the first batch released in August, saying the emails "show that he led on key parts of the Charles Pickering nomination, which he denied."

In one March 2002 email released on Sept. 13, Bush White House lawyer Bradford A. Berenson wrote that he would "defer" to Kavanaugh and another attorney on Pickering-related issues. "Brett and Noel have been much more involved in the Pickering fight," Berenson wrote. In another, a Justice Department official asked Kavanaugh for "blessings and instructions" before calling Pickering.

In a May 2003 email, a White House staffer named Wendy Grubbs told Kavanaugh she had requested "the Pickering package they are distributing." Who is "they." Kavanaugh asked. "The Pickering team," Grubbs responded. Chip's (chief of staff) and whoever else they are using. You should know them. Hehe."

In a January 2003 email, Kavanaugh pasted the contents of news articles about Pickering to keep staff abreast of coverage, including one unattributed column that argued that criticism of the judicial nominee was not about "false charges of racism," but about Pickering's views on abortion.

"Playing the race card on Pickering is an easy play indeed for the pro-choice lobby," the column reads. Above the pasted column, Pickering described it as "an interesting and probably accurate analysis."

Chip Pickering is Judge Pickering's son and a former U.S. congressman from Mississippi, whose career ended with him embroiled in an affair. His estranged wife later sued, alleging that the affair started while he was "a United States congressman prior to and while living in the well-known C Street Complex in Washington, D.C." A number of lawmakers involved in sex scandals lived in the C Street Complex, known as a Christian fellowship home.

Judge Pickering's nomination failed in the Senate after Democrats filibustered over his segregationist associations and advocacy for a reduced sentence on behalf of a convicted cross burner.   However, Bush appointed him to the Fifth Circuit in January 2004 anyway while the Senate was on recess; Pickering served until that December.

Back to the Citizens' Council

In his 2003 hearings, senators questioned Pickering about a case in which he argued for a reduced sentence for a cross-burner who was convicted of a hate crime. Pickering defended his decision, saying that man's sentence was unfair because two others involved in the case got off with no prison time thanks to a plea agreement.

Pickering also faced criticism for a 1959 law-review article that advised Mississippi legislators on ways to shore up the state's law banning interracial marriage to help it withstand constitutional scrutiny in the aftermath of the U.S Supreme Court's ruling ordering school desegregation. The Legislature followed his advice. Rather than repudiate the article, Pickering defended it as "an academic exercise." 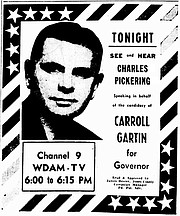 During hearings for Mississippi judge Charles Pickering’s nomination to the 5th U.S. Circuit Court of Appeals, he faced criticism for his ties to former state Gov. Carroll Gartin, a known segregationist who fought racial integration.

Former Democratic Mississippi Lt. Gov. Carroll Gartin, another Laurel native and Pickering's old law partner, also came up during the hearings. Gartin was a segregationist who fought racial integration every step of the way.

As Millsaps College history professor Stephanie R. Rolph describes in her recent book, "Resisting Equality: The Citizens' Council, 1954-1989," Gartin was extremely active in the racist Citizens' Council and a member of the active Jackson chapter. "His advocacy for legislation to outlaw the NAACP in Mississippi had endeared him to Council leaders in previous years... ," Rolph writes of Gartin's campaign against Ross Barnett for governor in 1959. Gartin's devout racism forced Barnett to prove his anti-segregationist cred and devotion to the Citizens' Council.

As lieutenant governor, Gartin had helped create the Mississippi Sovereignty Commission, the state-funded spy agency that tracked civil-rights activity, as well as instances of white business owners allowing black people to simply use their bathrooms. Gartin lost to Barnett by less than 40,000 votes.

During his confirmation hearings, however, those views were downplayed. Pickering described Gartin as a "progressive" whose segregationist views were mild.

In 1955, Gartin pulled out of attending a football game in Pasadena, Calif., where Jones County Junior College would be playing as guests after learning the California team would include black players. Previously, Gartin said he would travel and be the "number one booster" of the game. The story appeared in the Oct. 4, 1994, issue of the Los Angeles Sentinel.

In the March 1, 1956, edition of the Abilene Reporter newspaper, Gartin declared his support for a resolution in the Mississippi Legislature that says states have "the right to maintain, operate, and control their school systems"—a response to Brown v. Board of Education, which ordered the desegregation of southern schools.   "We are not willing to sit idly by and be trampled underfoot by the Supreme Court of this nation," Gartin said.

In the Nov. 25, 1958, the Greenville Delta Democrat Times reported that Gartin praised "the willingness of our Legislature to enact every conceivable law aimed at protecting our segregated system," and "the work and untiring efforts of organizations such as the Citizens' Councils and the belief by an overwhelming majority of both races that segregation is best for both white and the Negro race."

Pickering would have been aware of his law partner's views when he loudly supported Gartin's failed bid for governor in 1959. "Tonight see and hear Charles Pickering speaking in behalf of the candidacy of Carroll Gartin for Governor," reads a newspaper ad from Aug. 14, 1959, previewing an appearance on WDAM TV.

In 1964, Pickering left the Democratic Party and became a Republican, after chaos erupted at the Democratic National Convention when the Mississippi Freedom Democratic Party, led by civil rights activist Fannie Lou Hamer, demanded representation of black delegates at the convention. Pickering called Hamer's actions a source of "humiliation and embarrassment" for the state.

In 2003, Salon reported then-newly unveiled documents showing Gartin—who was secretly working with Republican leaders despite remaining a Democrat—had been behind the push for Pickering to switch parties to the GOP.

"This boy, Charles Pickering, is a very able person and I think he will mean a great deal to the Republican Party in Mississippi," Gartin wrote to a Republican Party official in September 1964.

"Personally, I have been so busy converting my law partner lately that I haven't been out too much, but I still think Goldwater will easily carry the state."

Barry Goldwater, the anti-civil rights Republican presidential nominee that year, won the state with 87 percent of the vote, despite being the first Republican to win Mississippi since the Reconstruction Era. His party switch is widely credited with accelerating the switch of segregationist southern Democrats—called Dixiecrats—to the Republican Party after national Democrats supported federal civil-rights legislation, which the Citizens' Council and Mississippi leaders vehemently opposed.

Pickering's 2003 nomination ended in a filibuster by Democrats. Bush appointed him to the 5th Circuit unilaterally using a recess appointment in January 2004, but the appointment ended in December.

Charles Pickering is now on the board of directors of Alliance Defending Freedom, a Phoenix, Ariz.-based legal group that drafted Mississippi's anti-LGBTQ "Freedom of Conscience from Government Discrimination Act," also called HB 1523. The ADF also provides legal assistance to Gov. Phil Bryant who signed the legislation allowing discrimination against LGBTQ Mississippians into law in 2016 based on religious objections.