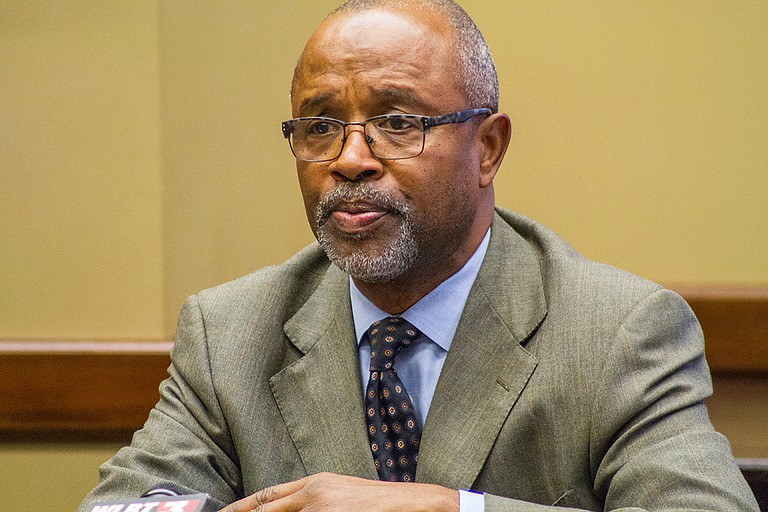 Rep. Robert Johnson, D-Natchez, said Democrats will watch to see how Republicans, who control the state budget, divert $100 million of the general fund revenues to municipalities and counties to use on roads and bridges. Photo by Stephen Wilson.

JACKSON — House Speaker Philip Gunn is serious about re-writing the state's education funding formula. Late last week, the Clinton Republican dropped the long-anticipated 300-plus-page legislation containing some of the recommendations from EdBuild, a school-funding nonprofit based in New Jersey, for replacing the Mississippi Adequate Education Program. By Tuesday, the House Appropriations Committee passed the measure, and the full House will likely debate the bill this week.

EdBuild's contract with the Legislature is long over, but three staff members came back to the Mississippi Capitol last week to run numbers in their education-funding recommendations for representatives. EdBuild staff met with House Republican leaders first in a closed meeting and then with Democrats for an hour on Wednesday, Jan. 10. Democrats opened their time with EdBuild up to reporters.

Lawmakers received handouts of how the latest proposal would affect the school districts they represent. The new proposal boosts the base student cost to $4,800 per student and incudes all the recommended EdBuild student weights for low-income students, English-language learners, high school students, special education and gifted students, as well as students in rural areas. Thirty-five school districts would lose state funding under the new proposal, data from EdBuild show, while the rest of the state's 148 districts would receive more funding, with DeSoto County Schools receiving the most additional funds at $19.8 million.

Overall, the proposal would mean spending $107 million more in the state's education funding formula over the next five years than the Legislature is now, the Associated Press reported, but overall, the new formula scraps the amount of funding the Mississippi Adequate Education Program requires.

Gunn's bill does not eliminate the current formula's "27 Percent Rule," which diverts nearly $120 million to 53 school districts across the state. The rule could generate more funding from those districts that under the Mississippi Adequate Education Program are not required to contribute more than 27 percent of their total school funding, even if they are financially able. The loophole was written initially into the MAEP. Rebecca Sibilia, CEO of EdBuild, told Democrats that the speaker had not asked her to run numbers without the "27 Percent Rule," despite EdBuild's recommendation to get rid of it entirely.

"It is inequitable, illogical and not good for kids," she told House Democrats in a meeting last week.

Doing away with the "27 Percent Rule" would fund the new formula at a higher rate in the first year than Gunn's proposal after five years.

Senate Democrats asked EdBuild representatives to come speak to them in a public meeting, but they declined after Senate leadership strongly discouraged them from doing so.

The Mississippi House of Representatives voted to use approximately $108 million in tax revenue for roads and bridges on Thursday in a bipartisan vote. House Bill 722 will divert 35 percent of the state's use tax collections to cities, counties and a grant program to pay for infrastructure.

The Department of Revenue collects use tax on goods residents purchase that are shipped and delivered into Mississippi from out-of-state. Recently, some online retailers including Amazon began to voluntarily collect the tax for the state. All brick-and-mortar stores here already collect the use tax on purchases.

"House Bill 722 is the most significant piece of legislation that I've seen in my time here," Lamar said.

"It's designed to provide a new dedicated stream of revenue back to the cities and counties of this state specifically earmarked for road and bridges repair."

The legislation divides the 35-percent diversion of use tax into three categories: 15 percent for cities, 15 percent for counties, and 5 percent for a grant program that the Mississippi Development Authority will administer to cities and counties that apply. County and city supervisors will have the authority to spend the funds on roads and bridges as they see fit, Lamar told representatives.

The $100 million sales-tax diversion will come out of general-fund revenues, however, meaning that lawmakers will have to cut other state-agency budgets in order to pay for the legislation.

"Do you know what are we going to cut to pay for it?" Rep. Jarvis Dortch, D-Raymond, asked Lamar.

"I don't," Lamar said, noting that the House does not want to cut K-12 education funds to help pay for it. "... We're going to have to make those tough decisions."

Rep. Thomas Reynolds, D-Charleston, offered an amendment that named House Bill 722 the "Improve Mississippi Act of 2018," and said the Legislature intends the bill to be the first phase in a comprehensive road plan. The amendment does nothing but re-name the act and add language that Democrats hope will hold Republicans accountable for passing more infrastructure legislation.

House Ways and Means Chairman Jeff Smith, R-Columbus, said he did not care what the House did with the amendment, and it ultimately passed 60-53, with several Republicans voting for it.

House Bill 722 passed 118-0, moments later. The legislation will have to survive in the Senate to be a reality.

"The Senate will review the proposals sent over by the House and will work over the next three months to find a solution to support infrastructure maintenance," Laura Hipp, Lt. Gov. Tate Reeves' communications director, said.

Democrats held a press conference after the bill passed. Rep. Robert Johnson, D-Natchez, emphasized that Democrats plan to keep a close eye on where the $108 million diverted to the infrastructure bill will come from.

"We don't control the budget. Our party is not in control of the money, and we have recommendations on how that $108 million should affect the budget, and we will make those recommendations down the road," Johnson told reporters. "We don't feel comfortable going forward saying we don't know where it will come from, but I can tell you this, we are committed to no cuts in education, no cuts in Child Protection Services and no cuts in Medicaid."

House Minority Whip David Baria, D-Bay St. Louis, objected to House Bill 722 when Republicans brought it to the floor Wednesday, and he told reporters Thursday that he wanted to make sure his party had time to read the legislation.

"I think that you're going to find that the House Democrats are going to want to see the bill, read the bill and understand what's in the bill before we debate and vote on that," Baria said.

Reynolds noted later that a lottery could pay for the transportation legislation, saying it was a possibility.