'Yes, Dr. King, How Can I Help You?': Black Rights Leaders Recall MLK 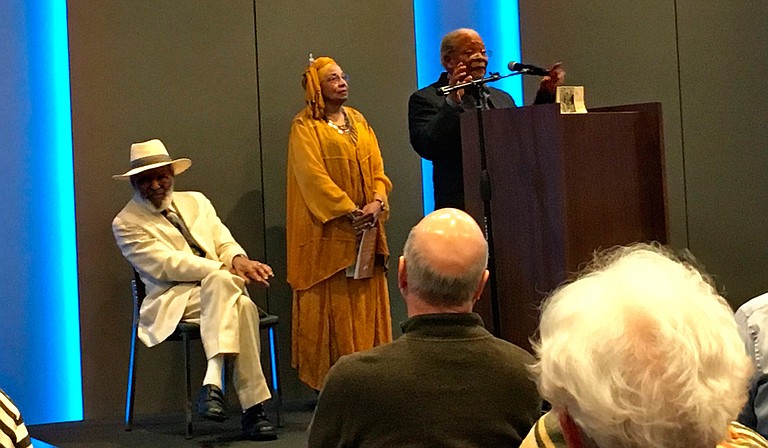 JACKSON — Flonzie Brown-Wright first met Martin Luther King Jr. over the phone. She lived in Canton and got a phone call from King himself three days before the participants in the March Against Fear in 1966 got to Canton on their march from Memphis.

"Yes, Dr. King how can I help you?" Brown-Wright recalled answering the phone.

"Can you provide housing and food for 3,000 people?" King had said.

"Without giving it a thought. Without wondering 'Should I?' 'Could I?'...'Why me,' I said to him, 'Y,es I can.' And when I hung up the phone, my knees knocked. I got very nervous, but I knew I could do it. I knew I could do it because Canton was so together," Brown-Wright said on Wednesday.

The marchers came to Canton and registered lots of black residents to vote, and Brown-Wright, who later became the first African American woman in Mississippi to hold public office as an election commissioner, recalled seeing thousands of marchers sleeping in yards, homes and gyms in Canton. She also remembered King sitting down with a dozen Mississippians in Canton before completing the march to Jackson.

"I sat at his feet, while he shared with us, 'My days are numbered. I won't be with you very long. The freedom movement, the Civil Rights Movement, is not about Martin King, it's about you. If the movement dies with me, it was never about me,'" Brown-Wright said Wednesday.

Brown-Wright, Charles McLaurin and James Meredith spoke at the 2 Mississippi Museums on Wednesday to commemorate the 50th anniversary of King's death and reflect on how his work affected them personally.

McLaurin, who was active in the Student Non-Violent Coordinating Committee, shared a story about playing touch football with King in Georgia during Southern Christian Leadership Conference training.

"I got a chance down there during the break one day to play touch football with Dr. King. ... Bernard Lee, John Lewis and others who were down there ... and I didn't really think much about that until a few days ago," he said on Wednesday, remembering his time in Dorchester, Ga.

McLaurin, a Jackson native, joined SNCC after hearing King speak and meeting him in Jackson in 1961. McLaurin went on to work with SNCC, registering black Mississippians to vote and working with Fannie Lou Hamer on her Congress run and political campaign.

"I was so amazed and elated over the fact that the guy could stand up and just let kind of words flow from his mouth," McLaurin said. "And he's talking about things of significance that I had read about in history books."

In 1968, McLaurin spent some time with King in the Delta, three weeks before his assassination. King was pulling together the Poor People's Campaign at that time, McLaurin said, and he drove him to catch his plane outside of Clarksdale back to Atlanta. King was assassinated outside the Lorraine Motel in Memphis a few weeks later on April 4, 1968.

Meredith, who famously integrated the University of Mississippi in 1962, also led the March Against Fear in 1966. He was shot and wounded along the route from Memphis to Jackson, but black-freedom organizations rallied in response, completing the march and detouring through the Delta. It was during that march route that Stokely Carmichael was thrown in jail for trying to set up a tent for marchers in the Delta. McLaurin said they helped get Carmichael out of jail; they had to set up the tent in a park in the middle of the black Delta community.

As the March Against Fear continued, the marchers worked to register African American Mississippians to vote as they went along—eventually staying in Canton with Brown Wright's community.