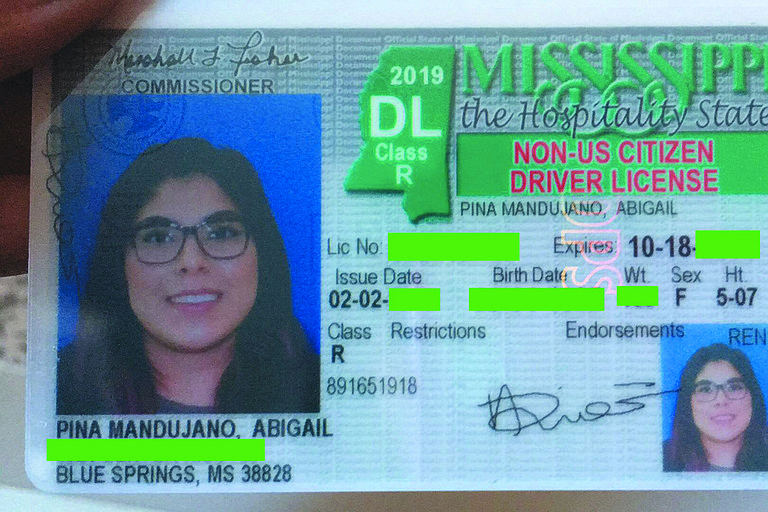 Mississippi has a policy that brands immigrants’ driver licenses with the words “Non-US Citizen” despite the fact that they must present proof that they are in the U.S. legally to get the I.D. Photo courtesy Abigail Pena Mandujano

JACKSON — Abigail Piña Mandujano had to start carrying her visa with her when she drives because her license is not enough to fend off questions from law-enforcement officials at roadblocks, she says. That's because "Non-US Citizen Driver License" is emblazoned on Mandujano's Mississippi driver's license in red letters.

"[D]own here we have a lot of roadblocks, and the officers will question me, and I've had to actually start  carrying my visa because some of them will ask for it," Mandujano, who lives in Blue Springs, told the Jackson Free Press recently.

Mandujano is not a U.S. citizen, but she is in the country legally. She has Deferred Action for Childhood Arrivals status, meaning her parents brought her to the U.S. as a young child. She has lived in the U.S. for 18 years since her family came from Mexico City when she was 3 years old. When she turned 18 in 2013, she went to get her driver's license and found that she and fellow DACA immigrants had different licenses than their other Mississippi friends.

Licensing for immigrants varies in different states, but Mandujano said her friends in other states do not carry licenses labeled that way.

Amelia McGowan, an immigration attorney at the Catholic Charities Migrant Support Center in Jackson, said she is unaware of another state with the "Non-US Citizen" demarcation on the license.

"We have a number of clients who apply for driver's licenses," McGowan said. "You have to have immigration status ... to get a driver's license, so if you are undocumented you cannot get a license in the Mississippi."

"If you are a non-U.S. citizen, you must meet all other requirements for obtaining an operator's license or identification card except for providing a Social Security card," the DPS website says. To get a license, an immigrant must present valid immigration papers, a birth certificate that is translated by a state-run university or an approved translator, passport and other proof of residency.

The license is good for the amount of time an immigrant's visa or papers allow her to stay.

The Jackson Free Press obtained the Department of Public Safety's "Out-of Country and Non US Citizens License and ID Applicants policy, which was most recently updated in November 2013. The policy shows that the "Non US Citizen" demarcation is required. "All applicants who are Non US Citizens must be issued a credential marked 'Non-US Citizen,'" it states. 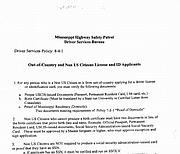 It is unclear how long this has been the policy of DPS or the purpose for this specific designation on an immigrant license. The Department of Public Safety did not respond to repeated interview requests from the Jackson Free Press about the policy or its purpose.

Mandujano is attending Itawamba Community College and wants to transfer to the University of Mississippi eventually. But as a non-U.S. citizen, she does not qualify for state financial aid for school, so she works to pay for her education. Some states have changed their laws to allow DACA recipients to receive financial aid for college. In Mississippi, Rep. Kathy Sykes, D-Jackson, introduced a similar measure this year, but it got little traction in a Republican-supermajority statehouse that passed legislation banning "sanctuary cities" statewide.

After the Sept. 11, 2001, terrorist attacks, Congress passed the "Real ID Act" requiring states to upgrade and intensify their I.D.s. This meant a mix of policy changes in different states pertaining to immigrants. The Connecticut state government recently created a drive-only license that allows undocumented immigrants to at least drive around the fairly rural state, Kara Hart, an immigration attorney there, said.

"[I]f someone is stopped for whatever reason, at least they are not going to be cited for driving without for a license, so that removes an enormous worry from people who are driving particularly in places where you may not have access," Hart said.

Hart said Mississippi's licensing law is different than other states that she has looked at because the "Non US Citizen" licenses include immigrants who are lawfully present. While Connecticut's drive-only licenses might be an obvious sign to law-enforcement officers that the person is undocumented, a "Non US Citizen" license in Mississippi gives no such impression—in theory.

In practice, however, Mandujano is asked about her immigration status regularly despite being in the country legally, she says.

"They start questioning, 'well, why are you here if you're not legal?' And I think a lot of people don't understand that you can be legal but not a citizen, so you've got all these questions coming," she says.  Such instances happen in Walmart or at roadblocks when she shows her Mississippi license.

"Even if you are legal here ... a lot of DACA recipients still live in the shadows, even though we are legal," she continued. "... It's a huge load to carry when people already have a bad impression of immigrants.