Compromising on Vouchers, Criminal Justice as ‘Back the Badge’ Bill Goes to Governor 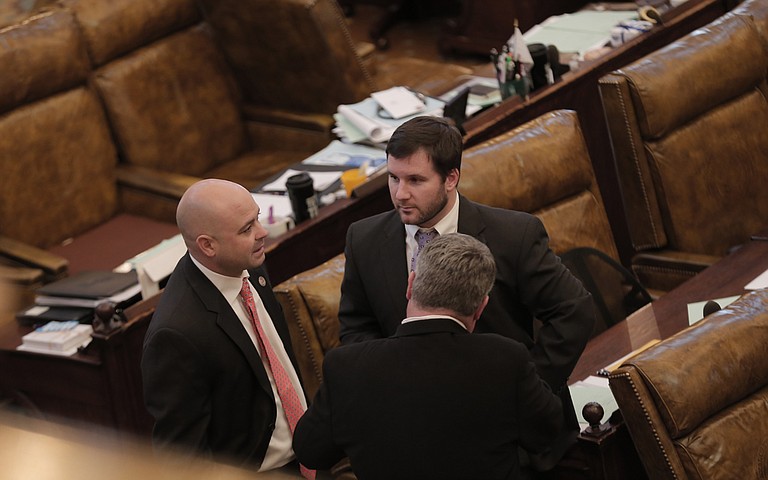 It is conference week at the Legislature, meaning lawmakers from the House (pictured) and the Senate have to has out differences and come out with final legislation both chambers can agree on. Photo by Imani Khayyam.

JACKSON — The fate of dyslexia scholarship-voucher expansion efforts, how criminal-justice reforms are implemented and occupational licensing-board oversight are in the hands of a few this week as Mississippi lawmakers conference and compromise on what stays and what goes.

The much-debated dyslexia scholarship legislation to allow students to use taxpayer-funded vouchers in other states if they cannot find services within 30 miles of their home might look different after conference. The Senate added significant amendments to the bill, including a provision that would require school districts to screen kindergartners and first graders for dyslexia with an approved screener test.

Sen. Gray Tollison, R-Oxford, told the Senate during a two-hour-plus debate that adding the screener provision would enable the State to identify a number of students who are not even aware that they have dyslexia. The bill is controversial because families could use the vouchers at non-public schools in other states, as long as they are state, regional or nationally accredited schools.

A few lawmakers will determine which criminal-justice reforms they want to become law, after a bill containing several suggestions from the state's Re-entry Council survived both chambers. The Senate changed House Bill 1033 to allow judges to not incarcerate those who owe outstanding fees or fines if they are at or below 125 percent of the federal poverty guidelines.

The bill's author, Rep. Andy Gipson, R-Braxton, told the House back when the bill first passed that Mississippi would be joining 38 other states that do not have automatic revocation of drivers licenses for crimes, except for driving-related offenses.

House Bill 1425 could win the award this session for "Best Makeover," depending on what happens in conference. The legislation is necessary for the state to comply with a 2015 Supreme Court ruling that requires certain occupational regulation boards to have members not directly involved in the industry they regulate. The bill currently would affect 26 boards, Sen. Sean Tindell, R-Gulfport, told the Senate during debates earlier this month.

The Senate amendment creates a commission composed of the governor, the secretary of state and the attorney general that would have oversight over any new regulation those boards want to create in the future; an earlier version of the bill put the governor in charge of all occupational regulations boards.

Police officers will become a protected class for hate crimes against them if Gov. Phil Bryant signs the "Back the Badge Act of 2017. The House approved the Senate's version of the legislation last week. House Bill 645 would increase penalties for felonies or misdemeanors against law-enforcement officers, firefighters or emergency medical technicians that suspects committed "with the specific intent to target an individual or group because of actual or perceived employment."

The bill caused an outcry mainly from the Black Legislative Caucuses in both chambers this session. The House version of the bill initially focused on increasing penalties for murder, but the Senate's version is much more broad, adding law-enforcement officials as a protected class under the state's hate-crime law.

Sen. Sean Tindell, R-Gulfport, authored the Senate language, which is now in the final version of the bill. He told the Senate back in January that the legislation was in response to the deadly police shootings in Baton Rouge and Dallas in 2016, but state law-enforcement officials did not request the legislation.

Critics of both "Back the Badge" bills say they lack protections for victims of police violence, mainly men of color.

Rep. Chris Bell, D-Jackson, told the House Feb. 8 about a time when he was pulled over and feared for his life. Bell told lawmakers that he had been 25 years old with no arrest record, but the officer told him to not move as he stood over him with a hand on his gun.

"That was one of the most frightening experiences of my life," Bell told the House in February.

The bill passed the House by a large margin, as it did in the Senate.

Email reporter Arielle Dreher at [email protected] and follow her on Twitter @arielle_amara for breaking news on the Mississippi Legislature.