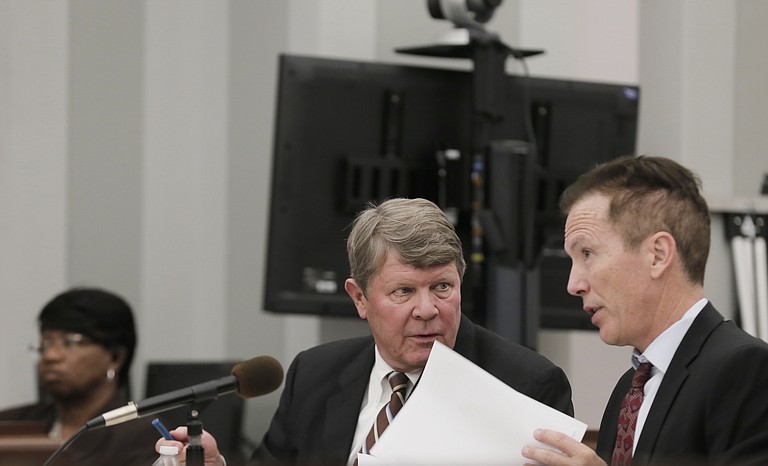 The jury is deliberating whether Downtown Jackson Partners President Ben Allen (left) is guilty or innocent of embezzling public funds. He is seen here talking with one of his attorneys, Merrida Coxwell (right). Photo by Imani Khayyam.

JACKSON — The jury in the trial of Downtown Jackson Partners President Ben Allen deliberated for six hours today before finding Ben Allen guilty of one count of a 10-count indictment—for paying $1,738.37 in bills for his and his wife's cell phones using DJP funds. Sentencing is March 6 at 11 a.m., and Allen's attorneys are vowing to get the guilty verdict overturned on appeal.

Count IV of the Hinds County grand-jury indictment charged Allen with paying bills for his and his wife's cell phones using DJP funds, and then not returning the money to the organization. DJP has said that Allen had its permission to reimburse his cell-phone bill, which he used for work, with money that it maintains is private funds and, thus, not the business of Hinds County or the government to regulate.

Hinds County Assistant District Attorney Randy Harris referred to Allen’s use of funds as “shenanigans” in his closing statement, while attacking the testimony of DJP Board attorney Robert Gibbs, one of the defense’s star witnesses. Gibbs, in his several days on the stand, told the jury again and again that the board willingly reimbursed Allen for business expenses on his personal credit card and approved the transfer of the truck to his name.

Count IV specifically stated that Allen did not return the money used on the cell-phone bill, although DJP maintains that he did. Whether Allen received the DJP property willingly and with the approval of the board was a point of law the defense leaned on in its closing argument. Yesterday, the prosecution attempted to side-step that language in the indictment handed down in early 2016, asking the judge to amend the indictment removing the clause indicating that the Allen did not return the funds before the jury heard their instructions.

The court did not look kindly upon the motion, denying Hinds County District Attorney Robert Shuler Smith and his team the opportunity to remove the phrases from the indictment that alleged that Allen refused to return the DJP property he embezzled.

Mississippi Code 97-11-25 charges that a person would be guilty of embezzlement by public official or trustee when he or she “shall unlawfully convert to his own use any money or other valuable thing which comes to his hands or possession by virtue of his office or employment, or shall not, when lawfully required to turn over such money or deliver such thing, immediately do so according to his legal obligation.”

The prosecution asked the judge to remove the phrase “and which monies he did not return” from last year’s indictment of Allen in each of the counts he faces for allegedly infringing upon that statute. DJP argued through Gibbs and a resolution in support of Allen that he had not refused to return anything to DJP.

“This is about properly advising the jury on what the law is, and if we do it the way they are asking, (the jury) is not going to be properly instructed,” Harris said.

“They chose to go with that, and that’s how we tried this case,” Allen’s defense attorney Charles Mullins said.

Mullins took advantage of this omission during his closing statements for the defense. He compared the allegations of the state to an argument between his children during the Super Bowl over who was the best quarterback.

He said the prosecution had never laid the foundation for the embezzlement charges, pointing out that DJP approved all the reimbursements to Allen’s account for the expenditures he made, including the credit-card bills.

“(The board) knowingly paid that money,” Mullins said.

Mullins reiterated the defense’s opinion that the DJP money is private, not public, and that the assessment for the BID is not a tax. Assistant District Attorney Sue Perry disagreed in her rebuttal, stating that a tax is a payment you do not choose to make, much like happened to property owners who voted against the BID but still have to pay the assessment.

“What makes a tax a tax is that you don’t get to decide how much tax you are going to pay,” Perry said.

She likened Allen’s ability to sign checks with no oversight as his “honey-hole,” among other illustrative comparisons to an easy source of cash with no consequences.

“He’s doing whatever he wants to do,” Perry said. “He had found his honey-hole, his goldmine, his cash cow, his pot at the end of the rainbow.”