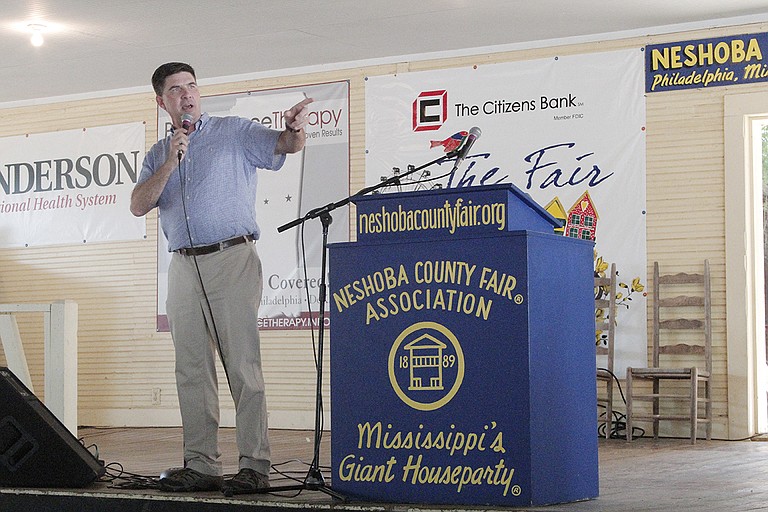 Mississippi State Auditor Stacey Pickering is working on a bipartisan data-mining project to be able to provide lawmakers and Mississippians with an accurate picture of how much Medicaid fraud happens in the state. Rachel Fradette

JACKSON — State Auditor Stacey Pickering is driving a bi-partisan approach to Medicaid fraud that stands in stark contrast to legislation the Republican supermajority in the Mississippi Legislature passed this past session.

Pickering announced his data-driven solution at the Neshoba County Fair last week. Mississippi has joined four other states in a program that teaches state agencies how to use more intricate data-mining software to find dual-payments, improper payments and potential fraud in the state's Medicaid program.

Mississippi joins Massachusetts, California, North Carolina, and Louisiana in a federally sponsored partnership to learn how to use the new software.

The state's Division of Medicaid will integrate its work with that of the other states, alert the attorney general's office to violations, and allow the auditor's office to easily hold Medicaid providers and recipients accountable.

The Louisiana legislative auditor found $1.4 million in improper, duplicate payments over a five-year period the 2017 report shows and the Associated Press reported.

The kicker for the program, Pickering said, is its non-partisan label.

"We did it kind of strategically; it's not a Republican or Democrat-driven program," Pickering told the Jackson Free Press. "It's accountability. You've got auditors from big states, small states, red states, blue states, purple states—we're sharing audit protocols that have been evaluated."

In the program, states receive feedback from the Centers for Medicare and Medicaid Services, as well as the non-partisan Government Accountability Office in Washington, D.C.

The bi-partisan program is not targeted at either Medicaid recipients or providers; instead, it looks at the whole system to identify outliers. Pickering gave an example of identical cases in Louisiana and Massachusetts, where one medical provider was supposedly working and billing Medicaid at 100 percent for 60 hours every week. That seemed out of the ordinary, and the software pulled that doctor's case out as an outlier.

"Of course, they go and find out that he's gone six months out of the year to his vacation home in Tahiti (or wherever), and he ain't working," Pickering said.

Republicans lawmakers tried to eliminate fraud on their own terms this year, by passing what they called the "HOPE Act" to increase transparency. The bill enables the Division of Medicaid and the Mississippi Department of Human Services to implement a new verification system to audit providers and recipients of Medicaid, food stamps and Temporary Assistance for Needy Families, or TANF, funding.   House Bill 1090 was largely modeled off of draft legislation from other states and by special-interest groups, and the measure passed with a loud opposition from Democrats, decrying the measure as another way to kick people off TANF, SNAP and Medicaid rolls, despite Mississippi being one of the poorest states in the country. 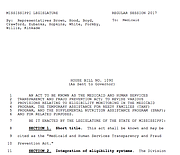 Republican Sen. Jenifer Branning, R-Philadelphia, lauded the bill at the Neshoba County Fair last week, saying it was one of the positive things lawmakers passed in light of "hard economic times."

"The HOPE Act ... is a welfare-reform bill that will save us an estimated $40 million in our state annually and about four times that on a federal level," Branning said. "This is designed to help us purge the welfare rolls and to get able-bodied Mississippians back to work being taxpaying, productive citizens again. Now, that's a positive change, and that's good government."

The $40-million figure comes from an assessment of the legislation from The Stephen Group, which found that the measure would generate $30 to $60 million in savings annually—but that includes both state and federal funding.

The Stephen Group Analysis of HB 1090 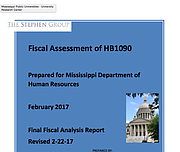 The assessment shows that the majority of the savings would be federal funds—not state funds. The state could save up to $13.7 million annually from Medicaid but none on the SNAP or TANF side, the assessment shows. Both Medicaid and MDHS receive large amounts of funding from the federal government.

Several parts of the HOPE Act became state law on July 1. One part of the bill codifies current MDHS policies into state law. The work requirement, which requires Mississippians to be working, seeking work or be a part of a work program if they want to receive SNAP, is now state law, after HB 1090 prevents the state from ever asking the federal government to waive that requirement.

The law also makes an MDHS policy permanent, which says a family who has received benefits for 10 consecutive months cannot receive additional funds if a new child is born into that household. Critics say these provisions, often called family caps, are based on the "welfare queen" stereotype.

Roy Mitchell, the executive director of the Mississippi Health Advocacy Program, said many states have repealed their family cap provisions in recent years.

"Those family cap provisions are probably in a growing minority of states; they are anti-family," Mitchell said.

Democratic opponents of House Bill 1090 pointed out during debates last spring that the legislation presumes a large amount of fraud in Mississippi instead of studying how much fraud exists first.

Pickering's program seems to do the opposite, and he said it has been an intentionally slow process.

"I'm excited about what we're going to accomplish (collaborating with) Medicaid, our investigators, the attorney general's investigators and also provide the Legislature a real, true picture of what's taking place, you know?" Pickering said.

"Everybody goes, 'All this fraud!', but let's find out," Pickering added.

The state auditor reiterated that the state's Division of Medicaid is on board with his project and that it is not politically driven.

"We're looking for, what do the facts say? Where is the money going? Where is the coverage? And what are providers doing?" Pickering said.

All the data-mining for the auditor's project will be in-house, the state auditor said. That is another key difference from the HOPE Act, which authorizes MDHS and the Division of Medicaid to issue requests for proposals for third-party vendors to implement the asset verification system described in the bill.

Erin Barham, the communications director at the Division of Medicaid, said it plans to use a current master contract with MDHS to implement the system. MDHS did not return repeated calls and requests for comment or further information about which contract it will use.

For now it seems it does not plan to issue an RFP for the work.

The HOPE Act does not go into effect entirely until 2019, but by then Pickering's team will have data and reports published.

The auditor said his office will likely publish the first reports at the end of this year or at the start of 2018, so Mississippians and lawmakers alike will soon be able to start looking at the data and see the level of fraud and waste inside the Division of Medicaid.