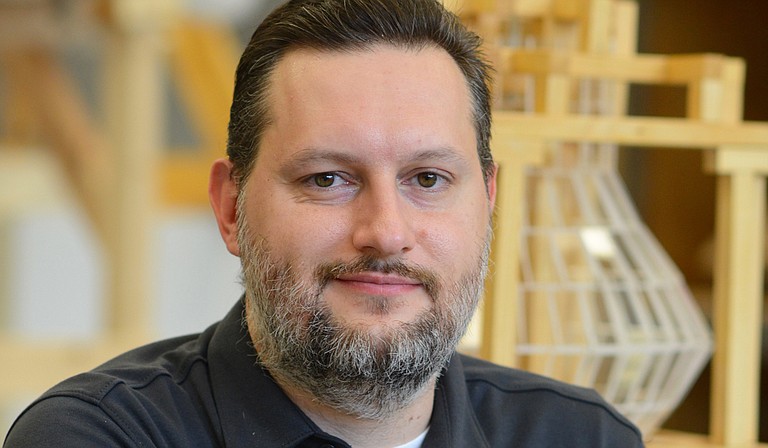 Nate Theisen, a professor of visual arts at Belhaven University for the last 15 years, started working there out of a desire to bring the arts into a religious climate.

"I had been looking for a small Christian school to work for, and I saw an ad for Belhaven online one day and thought it was just what I was looking for," he says. "I moved to Jackson for the job and fell in love with the friendliness and openness of Belhaven's campus. I've long felt the need to bridge what I see as a gap between the church and the arts, and found this school to be a great place to build stronger ties with the local contemporary-art community."

Theisen, 42, primarily does abstract sculptures that "explore the relationship between form, material and meaning," he says. He has helped develop several courses and programs at the university dealing with the subject of one's world view and how people understand and perceive their own.

At age 12, Theisen started teaching himself art, beginning with landscape and figure drawings. He remained primarily self-taught through college, after which he began exploring other possibilities for art such as sculpture, which Theisen says is "the most immediate way to express how bodies move and how we relate to our environment."

He received a bachelor's degree in painting from the University of South Dakota in 1998 and a master's degree in painting and sculpture from Wichita State University in Kansas in 2001. While in college, Theisen spent a few years in Germany doing an apprenticeship under a sculptor named Anatol Herzfeld as part of a foreign exchange program. Theisen traveled around Europe with Herzfeld and toured museums to learn more about European and American art styles.

Since he started teaching at Belhaven, Theisen says many of his students have become involved in the Jackson metro area art scene. Some of his former students include Erin Fults, owner of Acorn Studios in Clinton; Lee Cason, who owns a glass-fusing studio in Florida; David West, owner of Art Space 86; and several students who now work at Pearl River Glass.

The arts department at Belhaven recently received a Mississippi Arts Commission Visual Arts Fellowship grant courtesy of the National Endowment for the Arts. With the grant, he plans to take students to museums and studios around Jackson and help them explore new materials.

Theisen and his wife, Marie, have been married for 20 years. They have a son, Jeremiah, and a daughter, Lily.