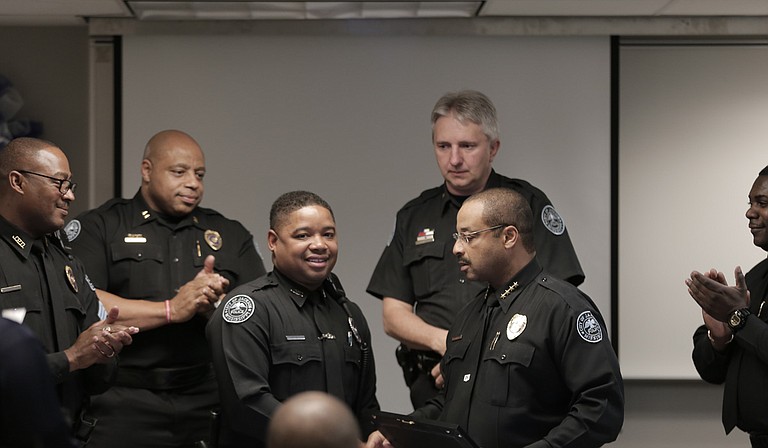 Officer Brandon Caston (center) was recently named Jackson Police Department’s Officer of the Month for March for collaring two suspected carjackers when he was off duty. To his right, Police Chief Lee Vance presented him with an award. Photo by Imani Khayyam.

JACKSON — Jackson Police Officer Brandon Caston was off-duty and sitting at a red light when he saw the stolen 2003 maroon Chevy Tahoe pulling into Burger King in his rearview mirror. Caston told the Jackson Free that he circled around, verified the car tags and communicated with Precinct 1 that he’d found the carjacked vehicle. Being alert and paying attention to his surroundings helped, he told the Jackson Free Press when describing how he made the collar of Deontae Paige, 18, and Gregory Hines, 19.

“That night has given me the confidence to reassure myself on a daily basis,” said Caston, who works in Precinct 3 in west Jackson.

Police Chief Lee Vance named Caston Officer of the Month at Thursday’s ComStat meeting. Caston, who has been with the Jackson Police Department for almost two years, was instrumental in arresting the two suspects who police believe were targeting women in the carjackings. One of the suspects was armed when they allegedly took the Tahoe from a woman in the 200 block of Springfield Circle on Feb. 6, 2016.

Homicide is down over a dramatic week of murders, with only one murder happening last week over the four the week before.

Chief Vance said Thursday that his team has made arrests in all the recent murders except for one incident. The department has strong leads in a recent shooting of three people in an apparent shoot-out on Fontaine Avenue near Lake Hico in northeast Jackson. One man died at the scene and an innocent bystander, a woman, was struck by a stray bullet and died after crashing her car in an attempt to drive herself to the hospital.

If you have information on the Fontaine Avenue shootings, call Crime Stoppers at 601-355-TIPS

Jackson Police Chief Lee Vance is on Mayor Tony Yarber’s Criminal Justice Reform Task Force committee, which begins public meetings March 23. Vance says the task force is designed to bring a lot of entities to the table and make recommendations to improve the flaws in various systems such as law enforcement, the courts, and handling cases before and after indictments—as well as prevention suggestions to hurt reverse the root causes of crime.

“The end game is to come up with recommendations based on data that we can propose to improve the criminal-justice system with all components involved,” Vance told the Jackson Free Press Thursday.

The Jackson Free Press will attend those meetings and track the task force’s progress and recommendations.