Down to the Wire: The Final Push to Pass Initiative 42 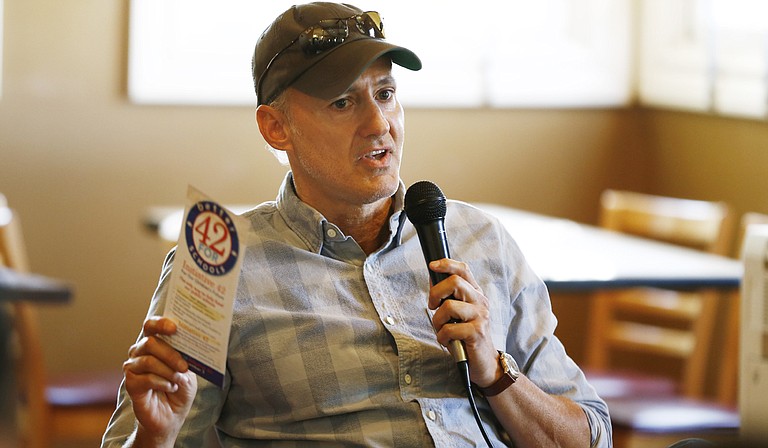 Michael Rejebian, co-manager of the 42 for Better Schools campaign, explained how to approve then choose Initiative 42 on the Nov. 3 ballot at Friday Forum. Photo by Imani Khayyam.

Less than a week until the Nov. 3 election, Initiative 42 proponents are making their final push to inform voters about the citizen-driven ballot initiative that would force the Legislature to fully fund the Mississippi Adequate Education Program. Michael Rejebian, co-manager of the campaign, told an audience at Koinonia Coffee House that the last steps to pass the initiative are getting out the vote and making sure people know how to navigate the ballot.

He said Initiative 42 was never a partisan issue, unlike Gov. Phil Bryant, Lt. Gov. Tate Reeves and House Speaker Philip Gunn have claimed in press conferences around the state, encouraging Republicans to vote against the initiative.

"Nearly 200,000 people signed these petitions; they were Republicans and Democrats, parents, clergy, business people—a broad cross section of Mississippi did this," Rejebian said. "So we always knew this was not a partisan issue by political party or race."

Initiative 42 has faced several roadblocks along the campaign trail, including a Legislative alternative measure, 42A, that will also be on the ballot on Nov. 3, adding further confusion for voters. Rejebian said the "state-rigging" of the ballot was unheard of. The Legislature has never introduced an alternative ballot initiative when Mississippians have voted on ballot initiatives in the past.

In order to vote in favor of Initiative 42, they must check the top box or bubble underneath both questions: Voters must approve a Constitutional amendment and then choose Initiative 42.

The Better Schools, Better Jobs campaign has spent around $4 million to pass Initiative 42, sent almost a million pieces of direct mail and will run three different television ads over the weekend on several channels—one with Supreme Court Justice George Carlson, dismantling the "one Hinds county judge" theory that opponents of the initiative have used in press conferences and commercials.

"The things we have done on this campaign have never been done before in the state of Mississippi for a campaign," Rejebian said. "We've done everything humanly possible to get the word out."

Representative Cecil Brown, D-Jackson, served as the education chair during his time in the House, and he said MAEP was re-adopted under former Gov. Haley Barbour under a bi-partisan joint legislative committee.

"These folks are not going to fully fund education," Brown told the audience at Friday Forum. "We've got 500,000 kids in public schools—the problem is we have roofs that leak; we don't have textbooks; we don't have computers."

Brown said MAEP funds the base of the educational system, paying for teachers, staff, the buildings and the facilities that make the public school system work in the state at a basic level. He believes Initiative 42 is the state's last chance to fully fund MAEP, and he fears the Republican leadership might change the formula by lowering it if Initiative 42 does not pass.

"They will change the formula, so they can magically fully fund it, and all of a sudden MAEP will be 'fully funded' with no more money," Brown said. "If people don't get out and vote for Initiative 42, we can kiss it (public education funding) goodbye for a long time."