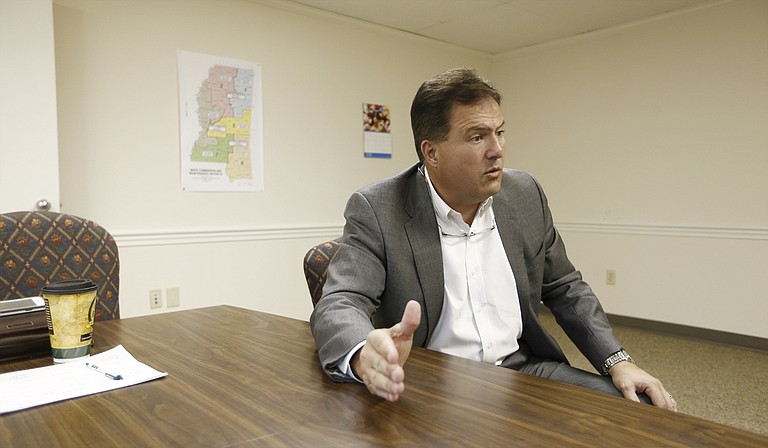 The Democratic challenger for lieutenant governor, Tim Johnson, changed political parties in early 2015, largely due to his desire to expand Medicaid. Photo by Imani Khayyam.

Almost a month before the upcoming election, on Oct. 2, Tim Johnson, the Democratic candidate for lieutenant governor, held a small press conference to announce he was challenging the incumbent Republican Lt. Gov. Tate Reeves to several debates before November. Johnson rode the Capitol elevator up to the third floor with one supporter in a wheelchair, hand-delivering the written request to Reeves' office.

With a week until the elections, no debates between the two men have occurred. 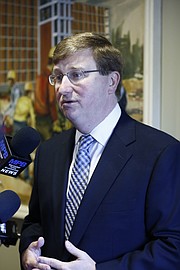 If campaign publicity is a measure, the stage is set for a showdown between Reeves and Johnson—although it has been a relatively quiet race thus far. Both candidates have statewide presence via large campaign signs and other advertisements.

Johnson has blazed a campaign trail around the state documented with social media and occasional press conferences, and while Reeves has garnered support from several businesses, his personal lieutenant-governor campaigning has seemed limited. (The Reeves campaign did not respond to interview requests from the Jackson Free Press).

The main issue both candidates have talked about prominently is Initiative 42, which would amend the state constitution to mandate an adequate level of public-school funding.

Johnson made his first public endorsement of Initiative 42 in July at the Neshoba County Fair, while Reeves touted the Republican leadership's allocation of $400 million more this year on public education than was spent four years ago (which includes funding for the Mississippi Institutions of Higher Learning and public universities).

As Election Day nears and the possibility of Initiative 42 actually passing goes down to the wire, Reeves emerged with other Republican state leaders—Gov. Phil Bryant and House Speaker Philip Gunn of Clinton—to warn Mississippians about what they consider dangers to the democratic process, education and state budgets if Initiative 42 passes.

Johnson believes schools need to be fully funded, and he supports a phase-in funding approach to fully fund MAEP that would take five to seven years, using 25 percent of future increases in the general fund, the same approach written in the Initiative 42 filing. MAEP, the Mississippi Adequate Education Program, is the state's formula to allocate money to schools that has only been fully funded twice since its creation in 1997. Initiative 42, a citizen-driven ballot initiative on next week's ballot, proposes a Constitutional amendment to force the Legislature to fully fund the formula.

Aside from Initiative 42, Johnson sees collaboration and communication as a key strategy to improving public education in the state.

"If we want to get off the bottom, you don't need a bunch of legislators talking amongst themselves," he told the Jackson Free Press in an interview. "We need to bring the superintendents, the educators (together)—let's figure out what needs to be done to get us off the bottom."

"We're going to spend over $285 million more on K-12 education this year than was spent four years ago," Reeves said at a press conference against Initiative 42.

This money, however, did not go directly to MAEP and instead was spent on reading coaches and teacher pay raises. The third-grade reading program is a part of the "General Education: Other" part of the Mississippi Department of Education's budget that makes up 6.6 percent of its total budget. (MAEP draws 88.2 percent of the department's budget). Reeves acknowledges that this money could have gone toward the formula and fully funded it by now, but was not directed there purposely.

"If all we cared about was the politics, we would have already funded it," Reeves said after a press conference in Hattiesburg on Oct. 22. "But instead of investing every penny we're investing on K-12 in the formula, we're actually doing things to help kids."

Reeves said he plans to continue to push full funding of MAEP in the upcoming legislative session if he is re-elected anyway because he wants to take the "excuse off the table."

Johnson has a different approach: fully fund MAEP first, then work on the additional problems that the formula might have.

"The main thing is, we need to evaluate (MAEP) to make sure it is fair across the state, but we've got to make sure our schools are fully funded," Johnson said.

Medicaid expansion is the other noteworthy issue in the lieutenant governor race—the one that led Johnson to switch parties.

Johnson was a Republican senator, representing Kosciusko and Madison County for eight years, then served on the Madison County Board of Supervisors and as a Madison alderman. He switched parties in early 2015 after his experience with Medicaid got personal.

His mother suffered a stroke and was rushed to Montfort Jones Memorial Hospital, which was so underfunded that it required emergency funding from the Legislature this past session—money that would not be necessary if Mississippi had taken the Medicaid expansion, Johnson said. A June White House report said that expanding Medicaid would provide 139,000 uninsured Mississippians with health insurance. Mississippi is one of 22 states that have not expanded Medicaid.

Medicaid expansion would allow greater access to health care as well as create job opportunities, Johnson said. He believes the current leadership missed out on an opportunity by not accepting the expansion.

"I view what they are doing as putting party politics over people and over my mama," Johnson said.

The Republican leadership, including Lt. Gov. Reeves, have not been willing to expand Medicaid or displayed interest in working with the Obama administration. Instead, various proposals have included appropriating funds directly to health clinics and hospitals that are in need of funding (like Mrs. Johnson's hospital).

Besides education and Medicaid, Johnson also plans to increase funding for infrastructure in the state, using and spreading federal Mississippi Department of Transportation dollars to multiple routes across the states.

Reeves said last week that he is running on his record, a line most of the top GOP candidates, including Bryant, Pickering and Gunn, are using this cycle. At a press conference in Hattiesburg, Reeves said because he has been in state politics for 12 years, he has developed a "reputation for being fiscally responsible."

"I have been fortunate enough over the last four years to create a record of conservative governance, of balancing our state budget," Reeves said.

Reeves' political career started in 2004, when he was elected state treasurer. He served two terms before making the jump to run for lieutenant governor and is the odds-on favorite to succeed the next governor in four years.

Johnson's political career started much earlier than Reeves' did. He was elected as a state senator in 1993 and served until 2005. Johnson was in the state Senate for two terms and on the Madison County Board of Supervisors for two terms. Before deciding to run for lieutenant governor, Johnson worked as an independent marketing consultant and insurance agent.

Johnson maintains that he is a "two-term guy" and said he is not out to be governor. Johnson said he has heard on the campaign trail that everybody is scared to death of Tate Reeves, but pushed by lobbyists to support the incumbent. If elected, Johnson said he would work to change that mentality of fear in the Legislature and let senators be senators again.

"I am running for lieutenant governor, not so I can run for governor, but I want to get these things done for this state," Johnson said. "You don't lead with fear—you lead with ideas and enthusiasm to help people."

So far, Reeves has the support of several industrial and business PACs, with $3.6 million on hand from his campaign coffers. Johnson has loaned his campaign $149,000 and has almost $16,000 on hand (both values as of Oct. 28).