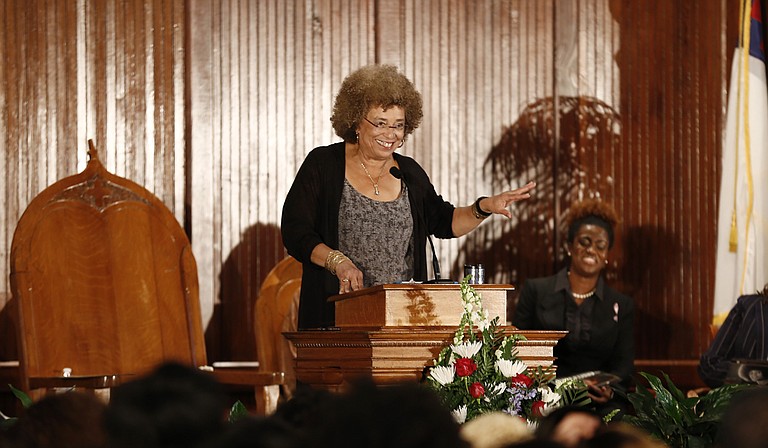 On August 18, 1970, J. Edgar Hoover, the then-director of the FBI, updated the agency's Ten Most Wanted Fugitive List to include the name of the third woman to ever hold the distinction.

That woman was Angela Davis, an activist and college professor, who authorities believed supplied guns used in a dramatic kidnapping and shooting in Marin County, Calif. Davis remembers being in hiding outside of Miami and finding out that she made the list while watching television.

"I knew the FBI was after me, but I didn't know I was on the Ten Most Wanted list, and I didn't know that they had characterized me as armed and dangerous," Davis told an audience spoke at Tougaloo College on Oct. 22.

Davis spoke as part of the fall 2015 Presidential Lecture in Tougaloo College's historic Woodworth Chapel, where some would-be attendees who arrived late were turned away at the door because of the large turnout.

Some members of the audience wore shirts with Davis' face and the phrase "Free Angela," a reference to her jailing from the fall of 1970 until her acquittal in June 1972. One audience member told Davis: "I just wanted you to know when we were in college, we measured our afros by the length and width according to your afro."

Davis' tone was light and the occasional joke drew laughter and applause from the audience. But her message never waivered in its gravity, nor did it falter in its call to inspire both the younger and older generations. For example, Davis spoke about the importance of intersectionality through race, gender, sexual orientation and nationality.

She discussed the relative unity found between Palestinians and #BlackLivesMatter protestors after images of Ferguson spread throughout the world.

"When Ferguson erupted summer before last, Palestinians were the first international group to bring solidarity to Ferguson. Thanks to (them), we were able to recognize how important it was to focus on the demilitarization of police because Palestinian activists noticed a lot of similarities between what was happening in Ferguson from watching the images, and what's happening in occupied Palestine."

Davis called on attendees to notice that the lines separating various factions of the social-justice movement are blurred.

"We have to see racism in a broader context," she said. "We have to recognize the extent to which Islamaphobia is linked to anti-black racism. One of the things you remember ... is that you can't expect things to remain the same.

"Everything changes, including the structure of racism. ... We've learned that we can't live on the laurels of the past. ... I can remember when we'd stand up against racism and anti-Semitism. I think we need to take that up again because anti-Semitism is still very powerful. ... Racism is not simply a domestic problem."