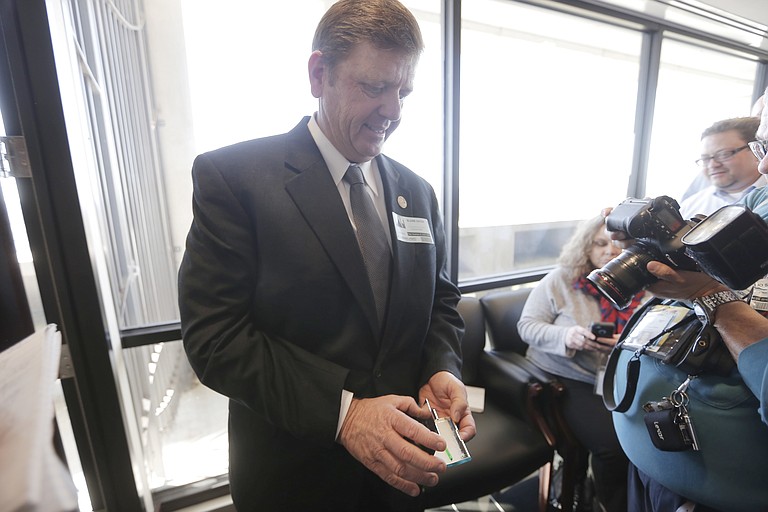 Rep. Blaine ‘Bo’ Eaton, D-Taylorsville, won a tiebreaker for his current House seat on Friday by drawing a box holding a green straw out of a bag. (Yes, you read that correctly.) Due to an old Mississippi law, ties in state election races must be broken by drawing lots under the direction of the governor and the secretary of state.

The governor’s conference room in the Sillers Building was especially crowded on Friday afternoon, as several people witnessed a drawing of straws to determine a winner in an election.

“Mississippi law—not that I would say I agree with it—says when an election is tied the winner is determined by lot, fairly and publicly drawn with the direction of the governor and the secretary of state,” Bryant told the crowded room.

Both candidates’ counsels made brief comments before the drawing.

Tullos’ legal counsel reminded the room that regardless of the draw, Tullos has filed a separate petition with the House of Representatives, asking the House to declare that he received the largest number of lawful votes. His petition will not be taken up until the House reconvenes in January.

After Eaton requested that his mother be in the room to witness the drawing, Hosemann told him to draw first since his name was listed first on the ballot. Eaton drew a silver box out of the bag, and Tullos drew the remaining box. Both candidates set their boxes down on the table and opened them at the same time.

Gov. Bryant declared Eaton the winner, and Tullos shook his opponent’s hand—and then left quickly without speaking to reporters.

Tullos’ victory would have sealed the House GOP supermajority, allowing them to pass tax or revenue bills without Democratic input. Eaton’s win has blocked the supermajority—for now. Eaton, a farmer who has served in the House for 20 years, said it must have been a good crop year.

“I’m a farmer and I gamble every day,” he said.” “I worry about the wind, the rain and the weather in my daily life, and a gamble is just what it is—I gambled and won.”

Despite winning the tiebreaker, Eaton said a special election would have been the fairest way to settle the tie, and he has asked Hosemann to work on changing the antiquated law in the upcoming Legislative session.

“This is an archaic, medieval law and I’ve taken that position,” Eaton said. “And I still believe that today.”

When questioned about Tullos’ petition to the House, Eaton said he hopes the House will be fair and look at everything presented to them in a fair and impartial manner.

“I’ve worked hard to be fair to both Republicans and Democrats,” Eaton said. “I have a lot of Republican and Democratic friends, and I think I am going to be treated fair(ly).”

The representative did admit that this election exposed that public opinion in District 79 is split, and Eaton said he plans to work to try to bring people together. Eaton, if seated, will still enter a Republican-dominated House in the upcoming session, and he said he’s excited to be able to offer a viewpoint from outside the norm. He mentioned state employee salaries and education funding as two priorities he ran on.

“I feel like they (state employees and students) have a voice that’s been elected here today by the longest green straw.”