‘The Whipping Man’: Anatomy of Freedom 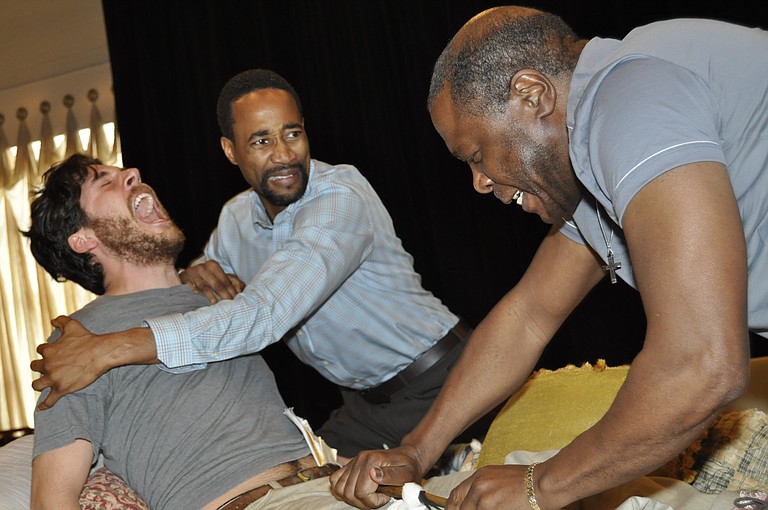 In Passover Seder, Jewish people drink four glasses of wine to symbolize God's four expressions of deliverance out of Egypt—Kiddush, Maggid, Birkat Hamazon and Hallel, which mean "I will bring out," "I will deliver," "I will redeem" and "I will take."

But a fifth glass remains untouched throughout the ritual. After the verses in Exodus denoting the promise of deliverance, God speaks a fifth time in Exodus 6:8, and says "I will bring you into the land which I swore to give to Abraham, Isaac and Jacob, and I will give it to you for a possession."

The fifth glass, called the Cup of Elijah, represents the collective freedom of all people. It will remain filled—and untouched—until all people are free.

"Even though Jews have overcome their personal persecution, and the Seder is a time to celebrate their freedom, there is a mindful awareness of not everyone in the world has achieved that freedom," says Brian Maxsween, who stars in New Stage Theatre's production of Matthew Lopez's "The Whipping Man." In one scene, the characters celebrate Passover Seder, drink the four glasses of wine, and remark on their newfound freedom and camaraderie.

Lopez, a native of Panama City, Fla., who currently lives in Brooklyn, told blogger Adam Szymkowicz in 2010 that he wanted to explore the ideas of men suddenly being free after being a slave their whole lives. He also wanted to expound on the fact that while Jewish Americans celebrated Passover the day after the Confederacy's surrender, a new exodus was happening around them. As he examined these themes, he came up with the idea of a Jewish slave-owning family, whose slaves eventually adopted the religion.

"A big crux of the play—(which) the author fell in love with in researching—is that there actually were Jewish families who owned slaves, and all historians agree that there is a very high probability that there were Jewish slaves as well," Maxsween says. "So (there's) the friction of Jewish slave owners owning slaves despite their history being slaves coming out of Egypt and celebrating their freedom."

"The Whipping Man" is one of the most widely produced plays of the last few years. The play premiered in New York in 2010 at the Manhattan Theatre Club. The sold-out production ran for 101 performances and garnered many awards for Lopez, including the John Gassner New Play Award from New York Outer Critics Circle. Since then, at least two dozen other theaters have produced the play, from the Actor's Theatre of Louisville in Kentucky to Baltimore Centerstage in Maryland. The play combines slavery, race, history and Jewish traditions to create the beautiful story the New York Times calls "haunting, striking and powerful."

The story begins just days after the Confederacy's surrender. Caleb comes home to find that his family has fled to the countryside, the DeLeons' mansion has been ransacked, and the only two left are John and Simon. Caleb chooses to stay with the two in the city, as the trio begins to celebrate Passover.

All of the characters, especially John, deal with a major theme for the play: what it means to be free.

Myles says that during a night of rehearsals, the cast members discovered that his character John symbolizes Moses. "His (John's) generation, in a lot of ways, is trying to break whatever boundaries that need to be broken for those who won't take a stand or a chance to see the promise of those things that we dream of," Myles says. "But John has a hard time understanding that the decisions he makes today affects everybody."

"The Whipping Man" premiered at New Stage Theatre Feb. 25 and runs through March 9. Curtain times are 7:30 p.m. Wedn.-Sat. and 2 p.m. on Sundays. Tickets are $28, with discounts available for seniors, students and groups. Visit newstagetheatre.com for more information.