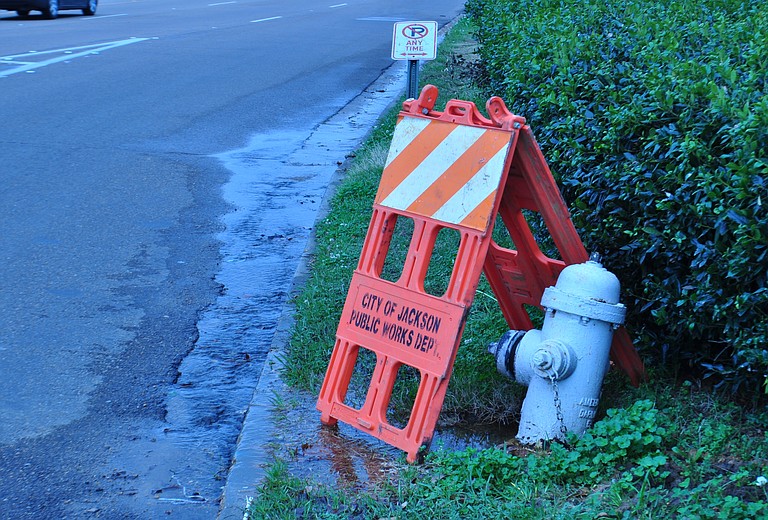 Mayor Harvey Johnson Jr. revealed the basics of a city water master plan Wednesday that will cost about $300 million over the next 20 years. Photo by Trip Burns.

Jackson is facing about $300 million in needed improvements to the city's water system over the next 20 years, a new study shows. That is in addition to the $400 million in necessary repairs and upgrades to its sewage system in the same time frame.

Mayor Harvey Johnson Jr. revealed some basics of the yet-to-be-completed water master plan Wednesday at his biweekly press conference. He said the $300 million will replace the old and rusting pipes that run throughout the city. Jackson-based engineering firm Neel-Schaffer conducted the water system study.

"It's a sizable amount of money that we're looking at in terms of replacing our pipes, but we're working on that," Johnson said.

Many of the pipes in the city have been in use for as long as 70 years, Johnson said.

The U.S. Environmental Protection Agency and Mississippi Department of Environmental Quality have handed down a consent decree mandating about $400 million in sewer-system improvements for the next 20 years. Added to the new water plan, street repaving and bridge repairs, infrastructure repair could cost the city nearly a billion dollars in the next two decades.

Johnson and his administration are looking to the state Legislature for help on a large portion of that sum. The mayor said he is supporting House Bill 546, which the state House of Representatives passed out of the Ways and Means Committee just in time for the Feb. 5 deadline. That bill would give the mayor more control in appointing the 10-person commission that current state law requires to oversee revenue from a local-option sales tax in Jackson.

Mississippi law allows the citizens of any municipality in the state with a population of 150,000 or more--which includes only the capital city--to approve a 1 percent sales tax in the city by a three-fifths vote. The tax would not include food, medicine, hotel or subscription television services.

Johnson wants to use the local-option sales tax to help fund the city's infrastructure needs, but he refuses to bring the initial vote before the Jackson City Council without changing to who decides where the money goes and how the city can spend it.

Under the current law, Jackson could use 30 percent of the money to improve police or fire services, and for emergency water, sewer and street repair. The other 70 percent would have to go toward street repair or reconstruction. Under HB 546, the governing commission could choose to use the funds on infrastructure improvements however it sees fit, with no caps on percentages for non-emergency water and sewer improvements.

The second provision Johnson wants changed before he initiates the sales tax is who appoints the 10-person commission that would decide how the tax proceeds are spent. Under the current law, Johnson would appoint three members from city residents and would select four commissioners from a list of eight nominees selected by the Jackson Chamber of Commerce. The governor, lieutenant governor and state speaker of the House would also appoint one member each to the commission, with the speaker's appointment serving as a non-voting member.

If HB 546 passes, Johnson would appoint seven of the members without input from the local chamber. Also, the speaker's appointment would get a vote. The bill also requires that all commissioners be Jackson residents.

Chris Mims, communications director for the city, said the bill is not exactly what the mayor wanted, but it's a step closer to the control over the sales tax that the administration wants.

"Although not ideal, if the (city) governing authorities were able to appoint the majority of the commission members, that would be much more palatable," Mims told the Jackson Free Press.

The city estimates the 1 percent sales tax would bring in between $15 million and $20 million a year, Mims said. That would likely be enough to fund the EPA-required sewer system improvements, but would leave the city searching elsewhere to fund the needed water and street improvements over the next 20 years.

Johnson recently announced that he plans to send a $10 million bond issue for street repaving to the city council for approval. Though not the ideal way to fund infrastructure needs, Johnson said, the bond issue will help the city complete some of the most urgent street repairs.