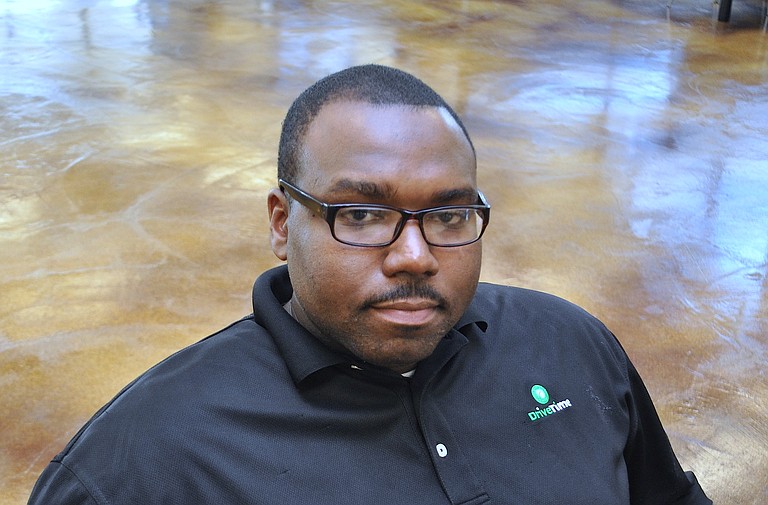 Jackson City Council hopeful Courtney Walker, 26, wants Jacksonians to know that his age will not keep him from leading Ward 5 in the right direction. Photo by Trip Burns.

When Courtney Walker was 14, one of the local TV channels came to his central Jackson neighborhood and interviewed him. The focus of the story was crime, as it is with many stories on the tube about Jackson. That interview made young Walker take note of politics and government in his hometown for the first time.

"That's basically what got me started and interested in politics," Walker told the Jackson Free Press Jan. 18 in his office at Drive Time Auto on Interstate 55 North.

It wasn't Walker's first experience with community involvement, though. The tall, broad-shouldered senior sales adviser began working at Stewpot Community Services with his mother, Cornelius, when he was just 4. That's where he met former Stewpot CEO Luther Ott and his wife, Janet.

Walker, now 26, gives the Otts and his mother all the credit for pushing him to go to college and providing the means. He attended Holmes Community College for one year, and then moved on to Mississippi State University, where he earned bachelor's degree in political science in 2009.

After graduation, Walker returned to Jackson and worked on Marshand Crisler's 2009 mayoral campaign. "That gave me a lot of information and a lot of know-how about how to handle things," Walker said. "Hearing those kind of people talk, it basically makes you want to do something better than what we're seeing right now."

Why did you decide to run for Ward 5 city councilman?

I know if elected, I can't do it by myself. It'll take the other council members and the mayor to jump on board in trying to get that changed. Living in the heart of Jackson in Ward 5, we have a street that is right beside the (Dr. Robert Smith) Parkway, right by Jackson State. We have a lot of people that come from out of town and people from in town that go up and down that parkway every day, and they have to look at those abandoned houses.

To give an example: Deer Park Street. I live on the next street (over) from that street. We have police coming over there almost every day trying to stop the drug traffic. One of the reasons is because you have those five or six houses that are abandoned. (Criminals) hide their drugs, or they hide whatever they're trying to do from the cops, because they do have those hiding places.

Unfortunately, the guy that I'm running against (Councilman Charles Tillman) hasn't really done anything about it in the eight or 12 years that he's been in office. I think it's time for a change, and I think the people want to see something different.

Ward 5 is the heart of the city, located right in the middle. It is an area of the city that hasn't seen a lot of economic development in a long time. How important is bringing business development there, and how can you help that happen?

It hurts us, and it hurts the businesses as well, because they could make so much money. If you take a look at the Westland Plaza area, now they are back to trying to grow with the additions of Foot Locker and stores like that. I think it's important that we have to get on the same page with the council and with the mayor, so we can get those areas taken care of. Without that, there's no way that we're going to be able to make it.

What I would tell my people in Ward 5, or a citizen in the Jackson area, is the council members, the mayor, even the people running for Senate seat 28, we have to be on board. We have to be on the same page in order to get the city back (to where it should be).

To be honest with you, I love my city. I always have. I have friends who've moved off to Washington, D.C., or Memphis because they were looking for something better. I've always said that my "better" is right here. That's just the truth. I believe in Jackson. I believe in Mississippi. And I believe in the end, we'll make a difference. Right now, we're kind of on the down side from Rankin County and Madison, but at the end of the day, we're the capital city and we're going to stand tall.

You mentioned crime. Look around the country, and you'll find cities with higher crime rates and more economic development. How much of Jackson's problem is a perception of crime, and what can we do as a city to change that perception?

I think you hear (about) crime a lot, and it kind of sticks in people's heads. The fact of the matter is it's a reality. We are a city that has been held up by crime.

Charlotte Reeves, one of the business women in Jackson, somebody basically just ran up to her and assaulted her. That's one of the reasons that people don't come (to Jackson.) That's true. Crime right now is bad.

We have Jackson police. With all due respect, we have them, (but) at times you wonder: "Where are they?" Although (JPD is) steadily increasing numbers (of officers), it's all about quality. You can have a thousand police, but if the quality is no good, you have no protection.

That's going to be one of the biggest things: getting on board with (Mayor) Harvey Johnson (Jr.), or whomever may win this election, just getting them on board to come up with a solution on how we can fix this and not just basically keep improving by numbers, but more so improving by quality.

I think first you have to put a lid on the crime. You have to fix that problem. I believe after that, economic growth will come. I don't think people are just shying away from Jackson, because they know it's the capital city, and we have so much growth that can occur. Like I said, people are just scared.

I don't know anybody that's going to go anywhere that they're scared that they may lose their life or may lose some of the things that they have with them. That's something that we're going to have to take care of if we're trying to see any kind of growth in the Jackson area.

We also have to accept diversity. It's not all about one color. As a black American, it's not all about us. Even though the majority of (Ward 5) and other parts of the city are black, we have to accept other people and realize that they have something great to offer as well. We can't just look at color to say, "Well, (that candidate is) my color, so that's who I'm going with." It can't be like that. The world wasn't built like that. We need help--right now especially--anywhere we can get it. As long as it's positive help, I think that we should accept it.

It looks really good to have young people looking forward to helping out the city congrats young man .