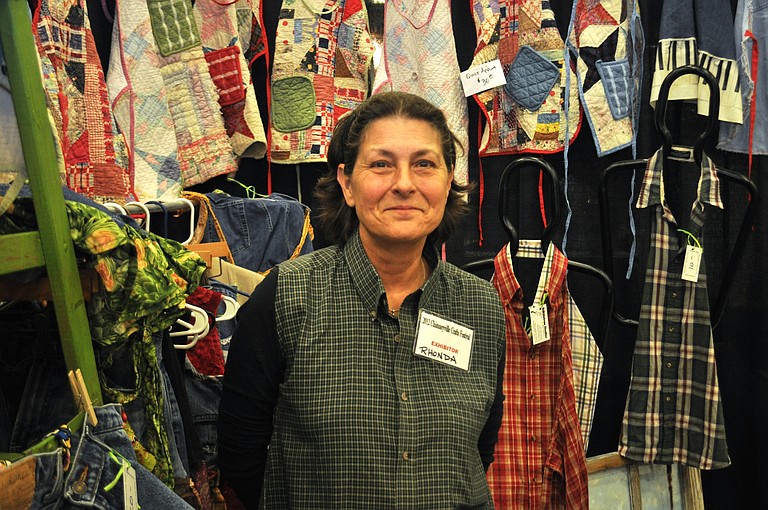 Rhonda Blasingame got her first sewing machine when she was 8 and began sewing clothing. "My grandmother up in the Delta taught me how to sew and quilt and all that with all of her sisters. She had a whole bunch of sisters, and that's what they did for entertainment," Blasingame says. "I would sit literally under the quilting frame while they were working."

Although Blasingame, 53, felt traditional quilt making was perhaps too rigid for her, she fell in love with needle and thread. "You don't even want to know what all crazy-ass jobs I've had, but the one common denominator is that no matter what I was doing, I would come home and quilt or sew," she says.

The Jackson native found her niche in art quilting. She creates art quilts both abstract and designed, large and small, simple and elaborate. She appreciates the freedom in art quilting versus traditional methods.

"As the joke goes, you take perfectly good fabric and cut it up into little bitty pieces and then sew it back into one big piece," she says. "But it all has to have the perfect quarter-inch seam and eight stitches to the inch and all these rules and laws ... and I've never been good at that sort of thing."

In art quilting, Blasingame can incorporate found objects into many of her works, and stretch the boundaries between quilting and mixed-media art. Beer cans, rusty washers, stained glass, agate, stone, paper, beads--all have found their way onto one of Blasingame's quilts. She also has branched out into creating her own surface-designed fabrics, where she takes a piece of white cotton and creates a design by painting, dying, stamping, stenciling, burning, wrapping it around something rusty. There are a thousand ways to make a mark on a piece of fabric, she says.

Blasingame is an exhibiting member of the Mississippi Craftsmen's Guild, juried in quilting and mixed media. She is considered a master quilter with the Mississippi Arts Commission, through their fellowship program, which allows her to take on apprentices. She teaches enrichment classes at Millsaps College and individual classes in her studio.

She still makes clothing--mostly upcycled garb from old clothes she gets at Goodwill, turning men's shirts into aprons and jeans into funky denim skirts, for example. In April she won Project Rezway, a local recycled fashion competition.

Blasingame has three children with Mark, her husband of 28 years: Cory, 27, Bryndan, 25, and Aidan, 23. Just over a year ago, Blasingame opened a new studio space, Bottletree Studios (809 Adkins Blvd., 601-260-9423) with fellow artist Anne Campbell. The two had shared studio space at the Mississippi Craft Center. The women, plus their studio cat, Stanley, work to promote craftspeople through events such as 809 Handmade, where artisans are invited to show in their backyard.