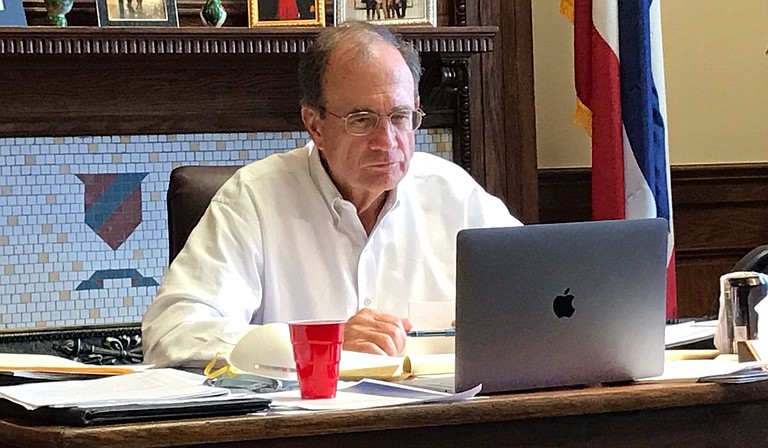 Republican House Speaker Philip Gunn says his priority is a complete phaseout of the income tax, the source of 34% of state revenue. Photo courtesy Delbert Hosemann

JACKSON, Miss. (AP) — Mississippi legislators are supposed to make big decisions about the state's pocketbook in the next few weeks, setting a budget that exceeds $6 billion and deciding whether to approve tax cuts.

House and Senate leaders have substantial disagreements over tax cut proposals. It's not clear they will overcome their differences, even though Republicans control both chambers.

Republican House Speaker Philip Gunn says his priority is a complete phaseout of the income tax, the source of 34% of state revenue.

Republican Lt. Gov. Delbert Hosemann says a better idea is to erase part, but not all, of the income tax. He also wants the state to send $100 to $1,000 rebates to people who pay income taxes — a proposal that could be for a single year or could be extended if Mississippi continues to see robust tax collections.

Mississippi's revenue has exceeded expectations the past several months, driven partly by higher federal spending during the COVID-19 pandemic.

Republican Gov. Tate Reeves pledges to sign a tax cut into law, but the House and Senate must agree on a single plan to send him. Each chamber has passed its own bill.

Both bills would reduce state taxes on car tags, with the House proposing a larger cut.

“Mississippi's been in last place for a long time, and we're going to stay there unless we do something bold and daring," Gunn said Feb. 28 on SuperTalk Mississippi. “We need bold and daring leadership. We need to have the guts to make change. And this income tax elimination is a game changer.”

Gunn said that if the House and Senate don't agree on an income tax elimination by the middle of March, he wants Republican Gov. Tate Reeves to call a special session “to eliminate the income tax before we spend a dime of any other money.”

March 26 is the deadline for House and Senate negotiators to set final versions of tax and budget bills. The new state budget year begins July 1, but it's important for state agencies to know how much money to expect. Schools, for example, will soon start offering contracts to teachers for the coming year.

“It didn’t come from some national organization somewhere that doesn’t live here,” Hosemann said in a jab at the House plan.

He said the Senate proposal for rebates is financially responsible.

“In times in which we have these mercurial raises when money falls out of the sky from Washington ... we want to be able to send some money back — back to people, put it in your pocket,” Hosemann said.

He said rebates could happen again next year if Mississippi is still enjoying higher-than-expected revenue.

Hosemann described the infusion of federal cash as “a giant bonus” for Mississippi and said the state should make plans for that money just as a person would after receiving a bonus at work. Hosemann gave the example of an employee with a $75,000 salary who receives a $50,000 bonus. He asked: Would that person set the family budget for $125,000, based on an assumption that the bonus would show up every year?

“If you did, you may have to move to an apartment,” Hosemann said, “because you lost the house.”