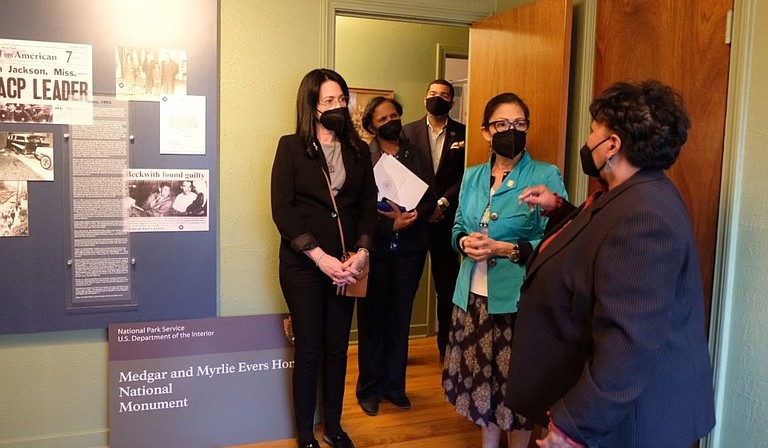 Haaland traveled with White House Council on Environmental Quality Chair Brenda Mallory and Democratic U.S. Rep. Bennie Thompson. The sites are in Thompson's district, which encompasses the Delta flatlands and much of Mississippi's capital city of Jackson.

Standing outside the Medgar and Myrlie Evers Home National Monument in Jackson, Haaland said the National Park Service and the Department of the Interior are looking to expand opportunities for people to learn about the civil rights movement.

“Today, I was so honored to learn, to listen, to hear from people who have been on the ground working in this for decades," said Haaland, a former New Mexico congresswoman who is the first Native American to lead a Cabinet department.

Haaland said she heard from young people who did not learn about Till while they were in school but have learned about him since then.

Till, a 14-year-old from Chicago, was visiting relatives in the Mississippi Delta when he was abducted, tortured and killed after witnesses said he whistled at a white woman working in a grocery store in the small town of Money. No one was ever convicted of killing Till and the Justice Department announced in December that it was ending its investigation into his lynching.

The killing galvanized the civil rights movement after Till’s mother insisted on an open casket, and Jet magazine published photos of his brutalized body.

“It's important that we educate our children because they deserve to know the history of our country,” Haaland said.

The Evers home became a national monument in December 2020. Medgar Evers' widow Myrlie Evers, who is still living, served as chairwoman of the NAACP's national board of directors in the mid-1990s. She donated the family home to Tougaloo College in 1993 and the college transferred ownership to the National Park Service.

Medgar Evers was the first field secretary of the Mississippi NAACP, beginning in 1954. He led voter registration drives and boycotts to push for racial equality. He also investigated lynchings, beatings and other violence that Black residents suffered at the hands of white segregationists. He was shot to death in the driveway of the family home while Myrlie and their three children were inside.

“This site tells of courage and bravery in the face of evil,” Mallory said.

Haaland said the Interior Department and the National Park Service have no immediate plans to take supervision of other civil rights sites.

“Of course, if additional sites are taken in under the National Park Service — whether they're national monuments, national parks, under that umbrella — then of course we have an obligation,” Haaland said.

Thompson stepped in and said: “What she said is, if the Congress gives her the money, she'll do it."

The congressman said he would like the National Park Service to have a civil rights trail to document and preserve sites across the South.

The Evers' daughter, Reena Evers-Everette, said she wants people to remember the “warriors and the foot soldiers” of the civil rights movement.