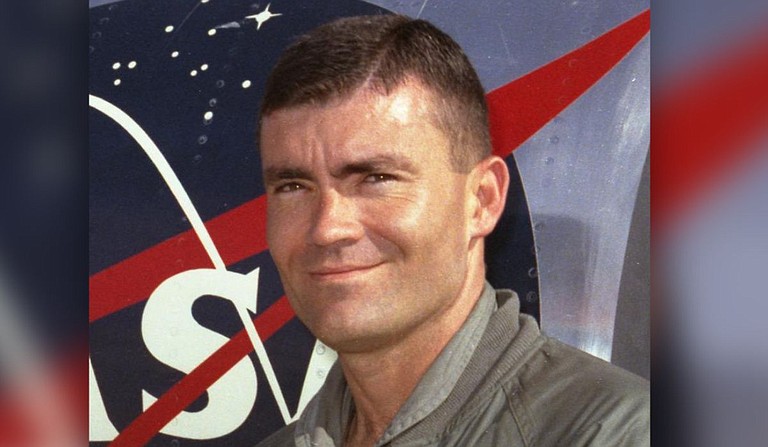 The City of Biloxi has unveiled a statute to honor Fred Haise Jr., an Apollo 13 astronaut who grew up there. Photo courtesy NASA

BILOXI, Miss. (AP) — A city on the Mississippi Gulf Coast has unveiled a statute to honor an Apollo 13 astronaut who grew up there.

The Sun Herald reported a crowd turned out Sunday in Biloxi to cheer 88-year-old Fred Haise Jr. He left his handprints in concrete and pulled a drape to reveal the 8-foot (2.4-meter) statue that depicts him in his spacesuit.

“This is such an incredible day,” Haise said as he looked at the crowd.

The original ceremony was planned for the 50th anniversary of Apollo 13 in April 2020 but was canceled because of COVID-19. Sunday’s event went on despite the death of Haise’s wife, Patt, less than a week earlier.

Two days after launch, an oxygen tank exploded on board Apollo 13, forcing the crew to abandoned their moon landing. The harrowing mission was depicted in a 1995 movie directed by Ron Howard.

Haise survived Apollo 13 and an airplane crash as a test pilot. He spent the past 15 years helping build Infinity Science Center in south Mississippi to inspire students to embrace science and technology.

Biloxi Mayor Andrew “FoFo” Gilich said the day and the ceremony was to honor “the amazing life and accomplishments of Biloxian Fred Haise — and I’ll say, the greatest Biloxian.”

Only 24 people ever flew around the moon, “and one of them was a Biloxian,” Gilich said.

The statue was created by another Biloxi native, sculptor Mary Ott Tremmel Davidson, who completed it over two years while battling cancer.

Haise said when children look at the statue, he hopes they know becoming an astronaut took hard work.