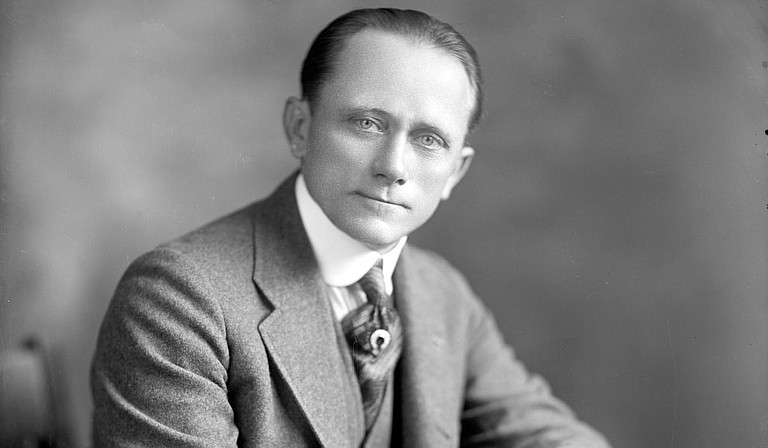 A statue of white supremacist former Mississippi Gov. Theodore Bilbo has quietly been moved out of sight in the state Capitol — a move praised by Black lawmakers who say he never deserved a place of prominence. Photo courtesy Library of Congress

JACKSON, Miss. (AP) — A statue of white supremacist former Mississippi Gov. Theodore Bilbo has quietly been moved out of sight in the state Capitol — a move praised by Black lawmakers who say he never deserved a place of prominence.

The bronze statue of Bilbo stood prominently at the center of the state Capitol for decades. After the building underwent extensive renovations in the 1980s, the statue was moved to a first-floor committee room.

Democratic Rep. Kabir Karriem, a member of the Legislative Black Caucus, said its lingering presence was “very offensive" in a state where nearly 40% of residents are Black.

Legislators have been meeting since early January, and it's only in recent days that people have begun noticing Bilbo was nowhere in sight.

The statue is approximately life-sized, at 5 feet, 2 inches (158 centimeters). It was not a revered art piece: People sometimes hung their coats or purses on its outstretched arm.

House Speaker Philip Gunn said he was unaware the statue had been moved until Thursday, when someone asked him about it. He said he does not know where it is.

“I have not verified anything,” Republican Gunn said. “We’ll look into it and see.”

Statues of Confederate soldiers and generals have been removed from public display in several places across the South in recent years amid debates about how the U.S. should acknowledge troubling parts of its history.

In the summer of 2020, Mississippi legislators voted to retire the last state flag in the U.S. that prominently featured the Confederate battle emblem. Months later, voters approved a new Mississippi flag without Confederate imagery.

Another member of the Mississippi Legislative Black Caucus, Democratic Rep. Ed Blackmon of Canton, said that when he was first elected to the House in 1979, the Bilbo statue was still in the rotunda.

“That’s the first person I met when I came to the Capitol,” Blackmon said Thursday. “I said, ‘My God. Bilbo.’”

During Bilbo's last campaign in 1946, a group of Black Mississippi residents filed a petition with the U.S. Senate, saying Bilbo had used “inflammatory appeals" to white people and incited violence that discouraged Black voters from participating in the Democratic primary, according to the U.S. Senate. A bipartisan group of senators traveled to Mississippi to hear testimony. A majority of them sided with Bilbo and said he should be seated, but a minority wrote a report saying Bilbo had used “vile, contemptible, inflammatory and dangerous language."

The Mississippi Legislative Black Caucus often meets in the room where the Bilbo statue stood.

“I really looked at it the same way I looked at the flag,” Blackmon said. “It was a symbol of this state's ideas about inferiority of Black people. He used my folk as a stepping stone to higher office."