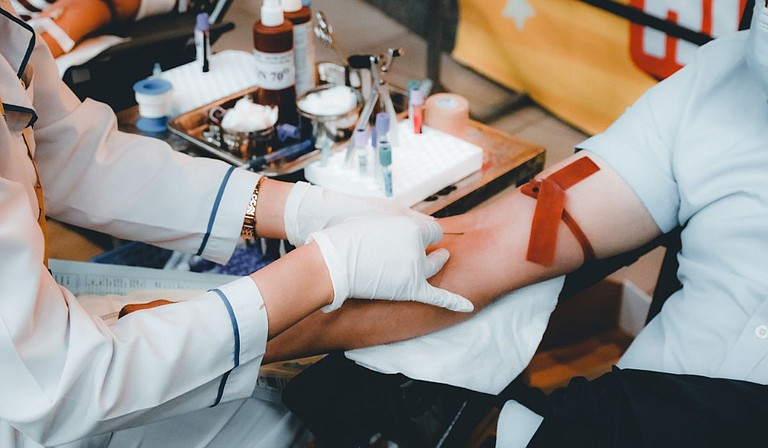 The American Red Cross, which provides 40 percent of the nation’s blood, says supplies are dangerously low. Some hospitals are canceling elective surgery, while others report nearly running out of blood. Photo courtesy Nguyễn Hiệp on Unsplash

After the holidays, it’s normal for the nationwide supply of life-saving blood to dwindle at hospitals and blood banks as donations slow.

This year, with fears about COVID-19 and the omicron variant keeping donors away or making them sick, blood centers say the shortage is worse than usual.

The American Red Cross, which provides 40 percent of the nation’s blood, says supplies are dangerously low. Some hospitals are canceling elective surgery, while others report nearly running out of blood.

Here’s why supplies are so tight and what needs to be done to get them back to normal:

The American Red Cross and hospital systems in the Carolinas, Idaho, Minnesota, Louisiana, Mississippi and elsewhere are reporting critically low supplies, largely because omicron has scared off or sickened donors. It's a national problem with pockets of severe shortages.

Through the end of January in North Carolina, for instance, about 75% of donation appointments were unfilled compared to 56% a year earlier. Plus, throughout the pandemic blood drives hosted by employers and college have frequently been canceled because of closures or work-from-home policies.

Blood banks and hospital officials say they are facing the worst shortage in more than a decade after donations dropped 10% since the start of the pandemic, further complicated by workers out sick at donation centers and supply-chain pressure on needles, bags and other equipment.

IS IT AFFECTING TREATMENT?

Some hospitals have had to postpone surgeries because they didn’t have enough blood to cover any emergencies that might come up the same day, said Nancy Foster, a vice president with the American Hospital Association.

Last week in Idaho, many hospitals had to implement standards that allowed them to ration care due to low supplies as well as staff shortages.

“This is a critical situation because it is forcing doctors to make a very difficult decision about who receives a blood transfusion and who must wait until there are additional products available,” said national Red Cross spokeswoman Cari Dighton.

IS THE SUPPLY IMPROVING?

Supplies are up a little after the Red Cross declared a national crisis in mid-January, but officials say it will take months to get back to more comfortable levels.

The Association for the Advancement of Blood & Biotherapies, or AABB, a group representing the nation’s blood suppliers, said that on Tuesday there was about a three-day supply of the Type O blood that's used for emergency transfusions on hand, above critically low levels but below the optimal five days' worth.

“People are beginning to step forward, but this is a long-term problem that that we will need help with over many, many months, in part because the demand for surgery continues to be high right now,” Foster said.

HOW CAN THE COUNTRY GET BACK TO NORMAL?

Experts say it will take a lot of work to persuade donors to return to regular donations and keep the supply chain full.

The AABB is leading a group of hospitals, care providers and blood collection organizations to tackle the problem. The 17-member group will share ideas on increasing supplies, such as coordinating publicity campaigns to have more impact.

“AABB encourages all eligible donors to make and keep an appointment to donate blood now – and to make blood donation a regular habit,” said Dr. Claudia Cohn, the group’s chief medical officer. “Donating regularly will help maintain the stability of the blood supply, so that blood is always available for patients when it is needed.”