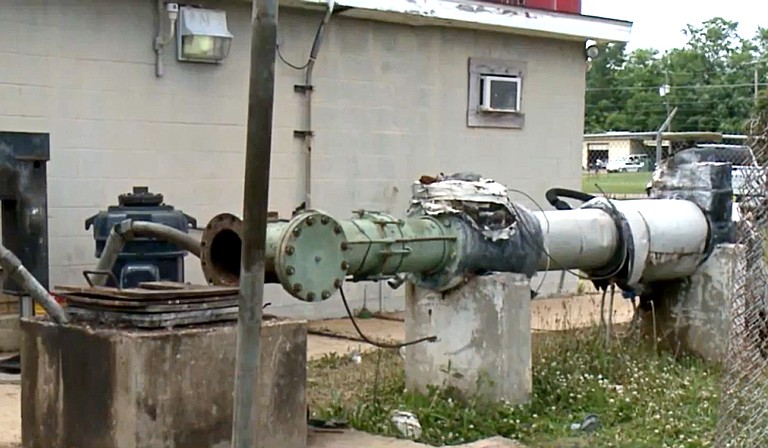 The Jackson Maddox well system services 16,000 residents via four well systems. Two of those pumps have now been out of service for six days, requiring a boil-water requirement for all customers and resulting in inadequate water pressure for some. Photo courtesy WAPT

Thousands of south Jackson and Byram residents remain without safe drinking water today, six days after two well systems in the area suffered failures. Repairs are still underway for both locations, though contractors installed a temporary pump at the Siwell Road location over the weekend in order to restore water pressure for those residents.

"We have been working very hard in order to get the well systems back up," Public Works Director Charles Williams said in a press briefing this afternoon. Early Saturday morning we were able to get Siwell Road back in service with a temporary pump, and we have water that is circulating throughout the distribution system in that area."

Jackson officials request that anyone serviced by this temporary pump should still call 601-960-2723 if they are experiencing inadequate water pressure.

Contractors are currently disassembling the TV Road well system in order to diagnose the issue, then determine the next course of action.

"They should have most of the well disassembled by this evening," Williams said. "At that particular time, we will have some different scenarios of how we would mitigate that issue. We are still trying to find a replacement pump for Siwell Road and so once we determine that status and when it will be delivered, it will affect obviously how we mitigate TV Road and whether or not we'll leave a pump for there."

Williams asked for patience from residents, acknowledging that there are still those with little to no water pressure in Forest Hill, along Maddox and Raymond Road.

"We're doing everything that we can in order to restore water as quickly as we can," Williams said. "But this is a very tedious process where we have to remove a lot of pipe out of the ground and we have to make sure that we do it correctly without disturbing some other well opponents while we perform this work, so we just ask for continued patience."

Updates on the progress at each of these sites will be forthcoming tomorrow.

“This notice does affect the businesses in LeFleur’s Gallery and Jacksonian Plaza including Kroger,” City officials said in a statement this morning.

Officials issued a separate boil-water notice for 10 connections in Belhaven this morning, affecting residents on Greymont Avenue. The boil-water notification is in effect until further notice, and those affected may call 601-960-2723 for more information.