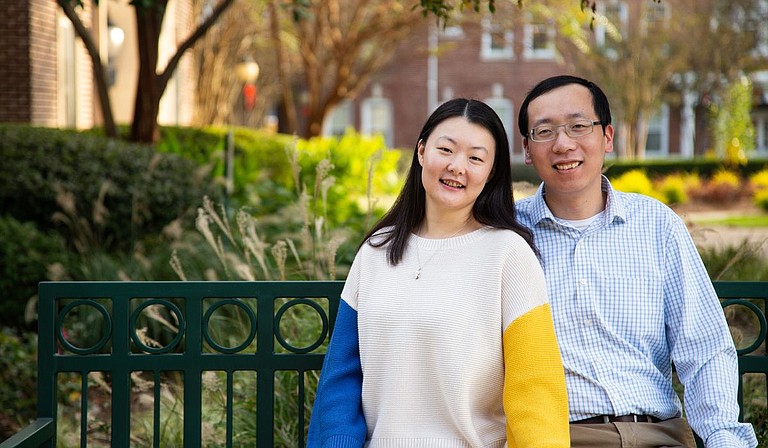 In 2018, Xiwei “Aaron” Wu and his wife, Langshan Song, both natives of China who learned English as a second language, founded Beyond English as a way to help students in China, Japan and the Jackson metro better learn English—with the assistance of native English speakers who are TESOL- or ESL-certified and work as tutors for the program. Photo courtesy Brittany Davis

When Xiwei “Aaron” Wu had the idea to create an online tutoring service for students who wanted to learn English, he had firsthand knowledge of how necessary the service would be. He and his wife, Lingshan Song, were both natives of China and had learned English as a second language.

The two wanted to provide a place for natives of other countries to have an opportunity to learn the language from effective native teachers.

Song, who works at Mississippi College as the assistant director of the Writing Center and teaches English composition, recruited tutors, and the couple founded Beyond English in 2018.

“When we first started, our intention was to help second-language learners to learn English, but in the back of our mind, we knew that we could offer more in the future,” Song says.

The program initially only offered online English classes to students in China and Japan. However, as the couple recognized the need for quality English language tutors, they expanded their services to American students. Beyond English now also provides virtual one-on-one tutoring in Language Arts and Math to K-12 students for native students, professional editing services and consultations for students creating personal statements, and admissions or scholarship essay assistance for college and graduate school applicants.

Students of Other Languages or English as a Second Language.

Kellogg began working as a tutor with Beyond English during her sophomore year of college. Initially, she taught group adult sessions to students in China. The classes covered the general aspects of writing, refining vocabulary and developing writing fluency. She learned as much from her students as she taught them.

“I think it’s very beneficial because it partners young English teachers … with students in China, with vastly different backgrounds, cultures and languages. There is as much for the tutor to get out of it as the student,” Kellogg, who now assists American students who are developing personal statements, says of her experience as a tutor. “On the other side of that the student gets to talk to someone who is again of (a) vastly different culture, a different background—and English is their first language, so they get the help from a native speaker.”

Parker, who began working with Beyond English in 2019, is responsible for training new tutors. She also teaches phonics, alphabets, sentence construction and foundational English skills to elementary-aged students in the United States as well as a discussion course for adults in China and the United States who are interested in improving their conversational English. She believes that the individualized attention that her students receive is a major benefit.

Song hopes to soon expand the company’s offerings to include more math courses and a foreign language. She is also hoping to attract more students from the local area for help in reading comprehension, writing and other language areas.

The couple believes that Beyond English provides much more than language-learning services.

“We offer more than just English as the learning subject, but more: Math and (soon) Chinese,” Song said in a follow-up email. “In addition, we believe in students’ potential. Sometimes they just need a great teacher to motivate and guide them with love, patience and effective learning tactics. Our teachers don’t just teach them to learn the subjects, but they also teach learners different skill sets, like analytical skills, interpersonal skills, writing skills and beyond.”