‘Setting An Example For The State’: UMMC To Mandate Vaccine For All Employees, Students, Contractors 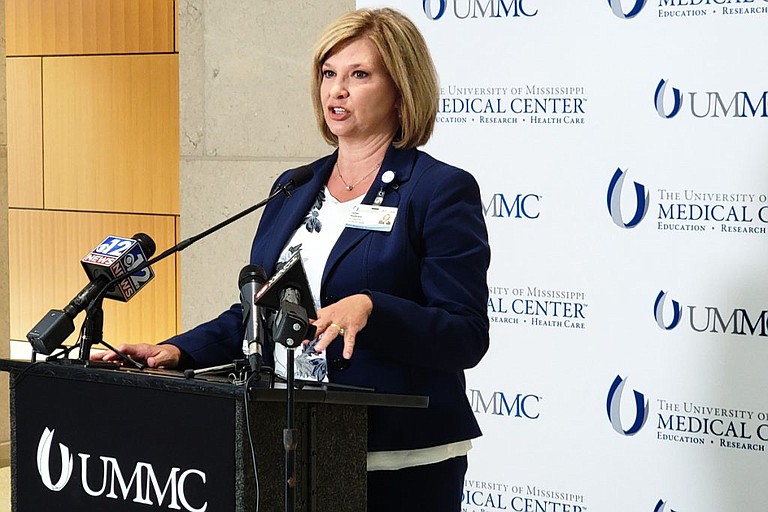 LouAnn Woodward, vice chancellor for health affairs and dean of the School of Medicine at the University of Mississippi Medical Center, announced that, by November, all employees and students on the UMMC campus must be vaccinated or wearing an N95 mask at all times. When the vaccine receives full FDA approval, it will become mandatory. Photo by Nick Judin

Employees, students and contractors at the University of Mississippi Medical Center have a choice ahead of them: Get the COVID-19 vaccine or find somewhere else to work. The state’s largest hospital system will be mandating the vaccine in phases, starting with managers and then direct-care providers, until Nov. 1, 2021. From that date on, anyone working or studying on the UMMC campus must be vaccinated—or wear an n95 mask at all times.

The policy will go even further, however, once the Emergency Use Authorization for the vaccine is lifted, something experts believe will happen no later than January 2022. When any of the available COVID-19 vaccinations are fully FDA-approved, the alternative option of continuous masking will cease, formally requiring vaccinations for all UMMC employees.

The University of Mississippi Medical Center is rejecting the honor system for vaccination with its plan to electronically verify the vaccination status of its employees, students and contractors. Photo by Nick Judin

Vice Chancellor LouAnn Woodward explained the new policy at a Friday morning press event, even as she acknowledged the backlash the institution was already receiving for the bold decision to mandate the vaccine.

“I acknowledge that this is not a popular policy with some people,” Dr. Woodward said, but continued, “the medical center has felt a responsibility and an obligation as the only academic medical center in the state … From the beginning of this pandemic, we have pledged to all of you that we would bring all our resources to bear, to take the leadership role—to set an example for the state.”

Notably, UMMC does not intend to use the honor system that has undergirded so many other pandemic-era restrictions, from mask mandates to capacity restrictions. Dr. Alan Jones, chairman of the hospital’s emergency department, also in attendance at today’s press event, explained that UMMC will be using the Mississippi State Department of Health database to verify the vaccination status of those on its campus.

“We have a process—there are multiple ways that our employee could be verified. We have the ability, with their authorization, to search the electronic database of the Mississippi State Department of Health’s records,” Jones said.

UMMC’s vaccine mandate will track with FDA approval, including the possibility of booster shots. “In the policy, we created a provision for several things,” Jones explained. “The first is that if the FDA recommends a booster shot, that will be required. If and when the emergency use authorization is lifted, and the FDA offers full authorization for the vaccination, it will become a condition of employment or enrollment at our institution.”

The decisions of Woodward and UMMC as an institution have shaped Mississippi’s resistance against COVID-19 from the earliest days of the pandemic. It was Woodward’s urging that helped force Tate Reeves’ hand on the shelter-at-home mandate in Spring 2021. The UMMC chief stepped in once more to help push the governor toward a statewide mask mandate during last year’s summer surge, a decision that preceded the largest decline of the virus in Mississippi during 2020.

Cognizant of the role UMMC has had in changing public policy, Woodward told the Mississippi Free Press that she hopes UMMC’s forceful mandate will inspire other health-care providers to take a similar tack. This is specially important for long-term care facilities, which have seen heavy losses throughout the pandemic, with many of their own employees unvaccinated despite the huge risks to their older and often immunocompromised patients.

Those same LTCs are facing a terrible threat with the coming of the delta surge. State Health Officer Dr. Thomas Dobbs warned that LTC outbreaks have quadrupled in a matter of weeks, as the persistent infection creeps into vulnerable populations, including some with weakened immune systems for whom the vaccine may be less effective.

Across Mississippi, the results of the state’s low vaccination rates are immediately visible. Mississippi has entered a second summer surge, with the highly infectious delta variant sweeping through the majority unvaccinated population.

Case numbers have sharply increased from their mid-June lull, nearly doubling, on average, in a matter of weeks. Hospitalizations, too, are close to doubling since their recent lows. Public health leadership have repeatedly stated that the effects of the delta surge are only just beginning.

State Health Officer Dr. Thomas Dobbs said today that the delta surge was as preventable as it is dangerous, thanks to a combination of the variant’s transmissibility and the low vaccination rate of Mississippi. Photo courtesy Thomas Dobbs

“Can I tell y’all a little secret?” a grimly sardonic Dobbs asked the attendees at an afternoon Mississippi State Medical Association press briefing. “What’s going to happen is painfully obvious. We saw delta coming. We saw our low vaccination rate. We saw what happened in Missouri and Arkansas,” he continued.

“Ninety-three percent of our deaths were in the unvaccinated. These deaths were preventable,” Dobbs said.

The 2021-2022 school year looms ahead, and unlike last year when even the mandate-shy Gov. Reeves forcefully insisted on mandatory masking in all schools, this year students will return to the classroom without the benefit of masking policies. This is in a state that has the lowest adolescent vaccination rate—12%—of any in the nation.

In response to the clear and present danger of outbreaks in school settings, which could drive additional hospitalizations of children and community transmission of the virus to more vulnerable elders and adults, MSDH released its guidance for the 2021-2022 school year, which again recommend masking for all unvaccinated children and adults, as well as vaccines for every individual aged 12 or older.

However, MSDH’s restrictions are merely guidelines, and do not carry the force of law in the same way that executive orders from the governor would. Reeves, for his part, has retreated from the very concept of pandemic executive orders, telling the Daily Journal’s Caleb Bedillion that vaccine availability obviated the need for orders.

“The fact is, every single Mississippian has had an opportunity to get the vaccine,” Reeves said at a Tuesday press event. “There are some who have chosen not to. I encourage them to do so.”

That is obviously untrue, with no Mississippian aged under 12 having had the opportunity for a vaccination. And with only a fraction of the state’s adolescent population vaccinated, the governor’s statement provides little relief to the state’s educators, who will be returning to the classrooms alongside their mostly unvaccinated students soon.

“The secret is there’s no secret,” Dobbs finished.

This story originally appeared in the Mississippi Free Press.