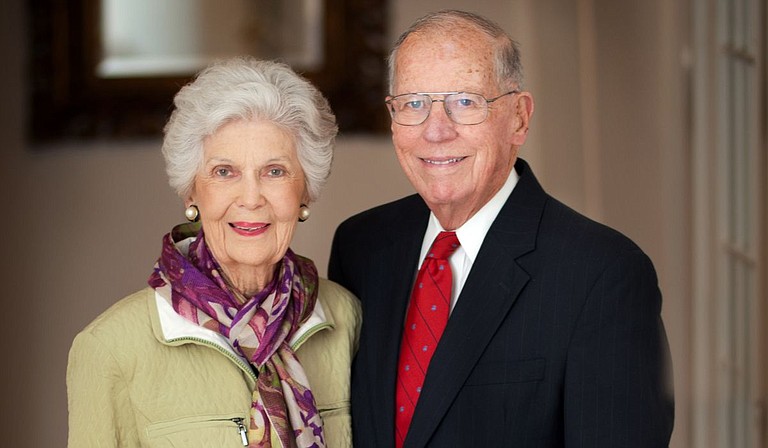 Elise Winter, the wife of former Mississippi Gov. William Winter, was surrounded by loved ones when she died Saturday at her home in Jackson, said Dick Molpus, a longtime family friend who served on Winter's gubernatorial staff. She was 95. Photo courtesy Ole Miss Photography/William Winters Office

JACKSON, Miss. (AP) — Elise Winter, the wife of former Mississippi Gov. William Winter, was surrounded by loved ones when she died Saturday at her home in Jackson, said Dick Molpus, a longtime family friend who served on Winter's gubernatorial staff. She was 95.

The family did not release a cause of death.

Born Elise Varner, she grew up in the north Mississippi town of Senatobia, sometimes working in her father's pharmacy. She started dating William Winter while they were both students at the University of Mississippi in the late 1940s. They married in 1950.

William Winter was a Democrat and served as governor from 1980 to 1984. He was best known for pushing Mississippi lawmakers to enact the Education Reform Act of 1982, which set rules for compulsory school attendance, established free public kindergartens and set quality standards for schools and teachers in a state that had long struggled with the intertwined problems of poverty, racial strife and poor academic performance. Elise Winter joined her husband's key staff members in traveling the state to persuade people to accept the changes he was proposing.

William and Elise Winter hosted social gatherings at the Mississippi Governor's Mansion for people prominent in politics and the arts, including many who grew up or lived in Mississippi, such as authors Eudora Welty, Margaret Walker Alexander and Willie Morris, blues legend B.B King and opera soprano Leontyne Price.

In 2015, Elise Winter published a book, “Once in a Lifetime: Reflections of a Mississippi First Lady.” She told Elbert Hilliard, director emeritus of the Mississippi Department of Archives and History, during an interview in front of an audience in May 2015 that she had used a recorder to dictate her thoughts for what she what she intended only a historical record, usually after her husband was asleep. After she was persuaded to publish those recorded journals as a memoir, she worked with one of her friends, author and editor Joanne Prichard Morris, to put the book into shape.

“I found that ... in recording, that you could say what you felt,” Elise Winter said.

Elise Winter told Hilliard that as first lady, she became interested in the Mississippi State Penitentiary at Parchman. She said she walked with her husband as he stuck his hands between bars of prison cells and introduced himself to inmates. She said he always said, “'Tell me who you are, how far you got in school.'”

“A number of these young people had not had any opportunity or had not had taken what opportunities they had to go to school,” Elise Winter said.

She said she became interested in the need for a visitors' center where families could see their imprisoned loved ones.

“It was dreadful that they didn't have a place that they could come,” said Elise Winter, who worked with a prominent Mississippi businessman to ensure that the center was built.

Elise Winter said during the interview that she learned, as a politician's wife, that campaigning was just part of life. She recalled meeting a man who peered over his glasses and asked if she was William Winter's wife. When she said yes, she said the man told her, “'Well, I guess if you can stand him, we can.'”

“I often thought that if you didn't have a sense of humor, you might as well just get out of the way in politics, because without a sense of humor you couldn't make it," she said.

When William Winter was in office, Mississippi governors were banned from seeking back-to-back terms. That prohibition was repealed in the late 1980s.