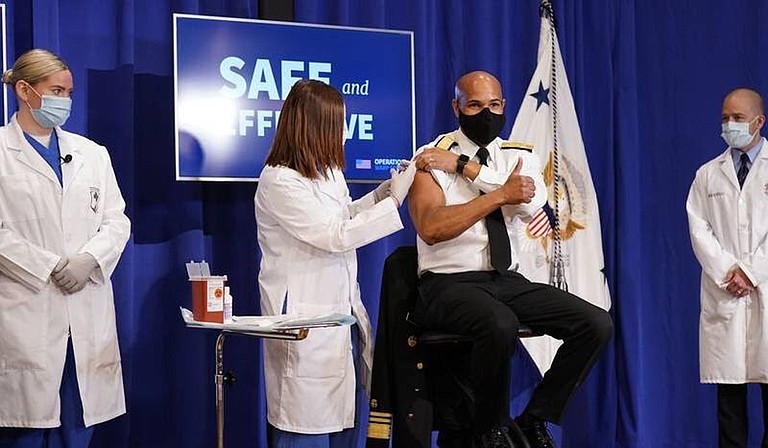 Dr. Jerome Adams, who is Black, spoke during an online forum hosted by Jackson State University. He said people distrust medical systems because of the government study that left Black men untreated for syphilis for decades, starting in the 1930s. Photo courtesy Jerome Adams

JACKSON, Miss. (AP) — The U.S. surgeon general on Thursday urged Black leaders in Mississippi to get COVID-19 vaccinations and to ask others in their communities to do the same.

Dr. Jerome Adams, who is Black, spoke during an online forum hosted by Jackson State University. He said people distrust medical systems because of the government study that left Black men untreated for syphilis for decades, starting in the 1930s.

“Former surgeons general, people whose pictures are out in the hallway behind me right now, oversaw the Tuskegee experiments,” Adams said from Washington. “So then we ask ourselves: ‘Why are people scared to take a vaccine that they think came about very quickly? Why are they scared to be first in line?’

“We have to acknowledge and validate those real historical reasons for concern, because when you tell people they’re silly to have those concerns, they immediately shut down,” Adams said. “Step One is acknowledgment. But, Step Two is addressing those concerns in a meaningful way.”

Adams said there are protections in place now “to make sure Tuskegee can never happen again.”

The Mississippi state health officer, Dr. Thomas Dobbs, said during the forum Thursday that only 15% of COVID-19 vaccinations in the state, so far, have gone to Black people, who make up about 38% of the population.

While vaccine skepticism could partially explain the numbers, access is also an issue.

“This is a huge challenge. We are working to address this,” Dobbs said. “We are going to try to make sure we open more locations in areas where there is need."

He said a drive-thru vaccination site could be open by next week in Hinds County, which is home to the city of Jackson and has the largest population of any county in the state, with about 232,000 residents. About 74% of people living in Hinds County are Black.

The Health Department has 18 drive-thru vaccination sites in the state. The two closest to Hinds County are in suburban Madison and Rankin counties.

Dobbs said there were logistical problems with creating a site earlier in Hinds County. He said the Jackson-Hinds Comprehensive Health Center has been a “fantastic partner” for the Health Department in giving COVID-19 vaccinations.

“We've given them about a thousand doses and they used every single one of them up very quickly,” Dobbs said.

The state Health Department said Wednesday that it cannot take new appointments for COVID-19 vaccinations for a while because all available doses are reserved for the appointments that have already been made. Mississippi saw a rapid increase in demand for appointments after Gov. Tate Reeves announced Tuesday that vaccinations were available to people 65 or older and to people of any age with underlying health conditions that might be exacerbated by the coronavirus.

Vaccinations were previously available to people 75 or older and to health care providers. Pharmacy chains CVS and Walgreens have a contract to administer vaccinations in long-term care facilities such as nursing homes.

The Health Department reported Thursday that Mississippi, with a population of about 3 million, had 1,948 new confirmed cases of the virus as of Wednesday evening. The department on Thursday also reported 41 deaths that occurred between Jan. 2 and Wednesday. The state has reported 245,847 cases of the virus and 5,356 related deaths since the start of the pandemic.