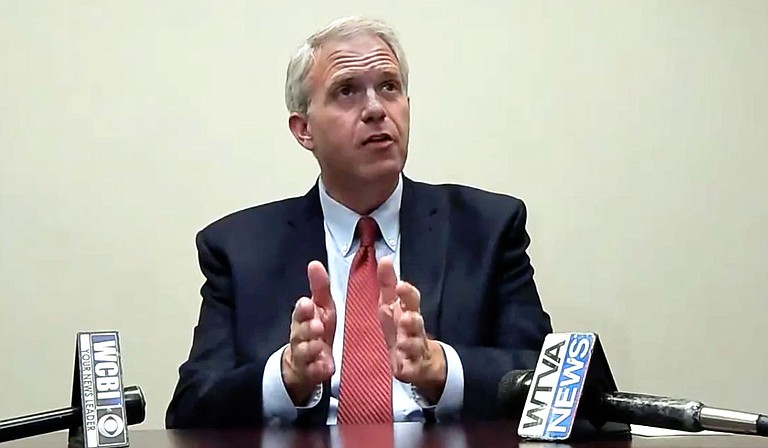 Brandon Presley, the public service commissioner for the northern district of Mississippi, issued a subpoena to telecommunications giant AT&T. He says it refused to account for nearly $300 million in federal funds, which the company says it used to connect more than 133,000 Mississippi homes and businesses to internet services. Photo courtesy Commissioner Brandon Presley

Telecommunications giant AT&T is facing a subpoena for information about more than $283 million in federal funds it received over the last decade to expand internet services in Mississippi. Northern District Public Service Commissioner Brandon Presley says the company has rejected all requests to explain how it has used that money. In response, his subpoena is seeking detailed information on how much of the money it has spent and what projects it has completed. 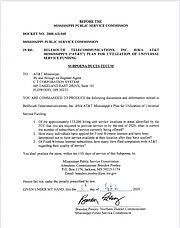 “(Not) a day goes by that I don't hear from a Mississippian that … has been promised (internet) service, cannot get service … or if they'd been told they could get services, they in fact apply for it, to only find out later that the service does not exist,” Presley said Friday, in a live-streamed press event. “This is a common story throughout rural Mississippi.”

The commissioner explained that AT&T has received $283,780,000 from the Connect America Fund, a Federal Communications Commission service project that directed the funds toward delivering high-speed internet service to 133,000 rural Mississippi homes and businesses.

These funds came from Phase II of the Connect America project. Phase I began in 2012 with a project that AT&T President Mayo Flynt said in 2018 had successfully connected 150,000 homes and businesses in the state to quality internet services. In August of that year, AT&T committed to Phase II, along with a promise to bring service to the additional 133,000 locations.

Presley says meaningful details about that project’s success, as well as information on how AT&T spent the hundreds of millions in public money, remain unclear. “The largest telecom company in this state refuses to answer just the most basic questions from regulators related to this success of those dollars, and whether or not they've been spent correctly, in the sense of how many people have taken service,” Presley said.

Reached for comment Sep. 14, AT&T Director of Corporate Communications Jim Kimberly provided the Jackson Free Press with the following statement on behalf of Mayo Flynt: "We comply with the law and the requirements of the FCC’s Connect America Fund Phase II (CAF II). In Mississippi, we are confident that we will exceed the final CAF II goal of making high-speed internet access available to 133,000 rural Mississippi homes and businesses by the end of this year."

Presley emphasized that gaps in coverage are evident to the Public Service Commission. “We know for a fact that Mississippians continue to lack internet service,” he said, adding that the expenditures were meant to improve services beyond internet connectivity. “One of the promises of expanding this fixed wireless service was that it was going to have some effect on expanding cellular telephone service. And yet we’ve got areas in north Mississippi (where) you can't get a cell-phone signal with a SWAT team and a search warrant.”

A common occurrence for those seeking connectivity through the program, Presley explained, was for AT&T to tell the household in question that internet connection services were available for them, only to inform them later that connectivity to their location was impossible. Presley is asking the public to call his office at 1-800-637-7722 and share their experience if this has happened to them.

Presley’s accusations do not currently rise to the level of accusing AT&T of fraud, a point the commissioner underlined in his presser. “I want to be clear. … I'm not disputing that in some form, some service may be put out there. But I do question a company’s motivations to not answer regulators’ most basic questions about $283 million that they've taken,” he said.

The subpoena is not the first time Presley has locked horns with Mississippi’s largest telecom provider this year. Earlier, in April, he castigated AT&T for failing to restore its services to rural Tippah County in the earliest days of the COVID-19 pandemic.

“The market has failed rural America,” he told the Jackson Free Press then. “The rush to deregulation has turned the telecommunications industry into the Wild, Wild West.”

‘The Biggest Hog at the Trough’

Now, Presley is widening his search, saying that the enormous wealth consumed by the company demands scrutiny. “When you combine all the federal funds that they've taken, AT&T has been the biggest hog at the trough, receiving over a billion dollars over the past decade. That requires answers.”

In an interview with the Jackson Free Press, Presley said he intended to find out how many households have actually adopted the internet service AT&T says it has made available to over 280,000 Mississippi homes and businesses since the beginning of the Connect America Fund, not just those provided in Phase II.

"How many areas across the state, how many people have actually taken this service that AT&T has put out? If you take that information, coupled with the fact that Mississippi's ... broadband disparity has been exposed for all the world to see because of this pandemic, something doesn't add up," Presley said.

Presley claims it is AT&T's intransigence on the construction, adoption and efficacy of its new services that prompted him to issue the subpoena. "They refuse to give us just the basic answers to questions. One of them in the subpoena is how many people have called into AT&T to complain about this service not working. ... They're supposed to guarantee 10 megabits download speed and one megabit upload speed. How many people are actually getting that?"

"We can't force somebody to (sign up for broadband)," Presley said. "But if you put it out there, and nobody signed up? Or 1000 people signed up? Anybody in my job will say well, wait a minute now. We've got a huge broadband desert in this state. We've got a company that's got $283 million. Did the company in fact put out the service like they said they did?"

Presley issued the subpoena on Friday, Sep. 11. The commissioner explained that AT&T has 10 days to respond.