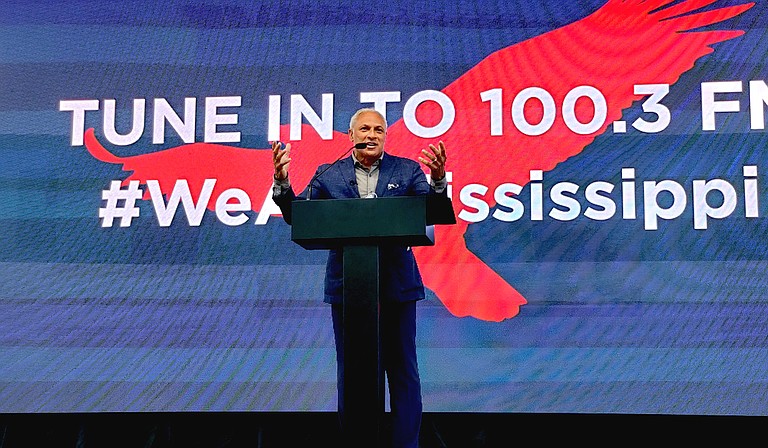 Cars gathered around the outdoor stage in the New Hope Baptist Church parking lot in Jackson last night, with volunteers for Democratic U.S. Senate candidate Mike Espy and press scattered about. Supporters remained distanced in their vehicles at the drive-in event. Espy staffers held up signs calling for honking in the place of cheers, and after the persistently familiar technical difficulties of the Zoom call, politicians joined in from elsewhere in the state and country to share their support for Espy, the drive-in event necessitated by the COVID-19 pandemic.

Court of Appeals Judge Latrice Westbrooks, a Black candidate for Mississippi's Supreme Court, took to the stage early in the rally, urging Mississippians young and old to vote.

Following Westbrooks, Bobby Rush, a living blues legend, shared a speech and a song. “I know that Black life matters,” Rush said, “because I've been singing the blues almost all my life, but I’ve been Black all my life. I’ve been Black for 86 years. And I’m begging you to go out and vote November 3rd.”

Mike Espy made his appearance as the sun settled in behind the stage, framing himself as the candidate of Mississippi’s future and his Republican opponent, Cindy Hyde-Smith, as the incumbent of its past.

“As we move into the third decade of the 21st century, here we are in Mississippi. Still last. … Last in health care, last in education, last in job opportunities … I am sick of it. Are you sick of it? It has become clearer to me, that in the last two years, Cindy Hyde-Smith has held Mississippi back,” Espy said.

The future, Espy explained, looks like the work he has engaged in since his time as a U.S. congressman and then agriculture secretary, practicing law and serving on the board of Feed the Children, a non-profit organization. “We built grocery stores in food deserts. We built hospitals in medically underserved areas,” he said.

Racism, too, loomed over the proceedings. Espy shared stories of his own childhood, in an integrating highschool, majority white. “I was called the n-word so much I thought it was my middle name,” he said.

Health and racial justice intersected for Espy as a child. He again shared the story of the asthma attack that nearly killed him as a child, which he recently told the Jackson Free Press in an interview. He survived only through the charity of white nurses at a segregated hospital better equipped than the Black one intended to serve him. He drew a line from that story to the experience of Shy Shoemaker, a Chickasaw County woman who died in 2019 after an asthma attack and a closed rural emergency room forced her to travel across county lines for help.

Stacey Abrams, former Georgia gubernatorial candidate, ended the proceedings with a video message of support for Espy. “We can tell America that Mississippi is a force to be reckoned with … that with Mike Espy as the next U.S. Senator, that Mississippi is the state where COVID will not defeat our opportunity.”

Cindy Hyde-Smith, Espy’s opponent, told The Clarion-Ledger through a spokesperson that she does “not have any rallies that we are announcing at this time."