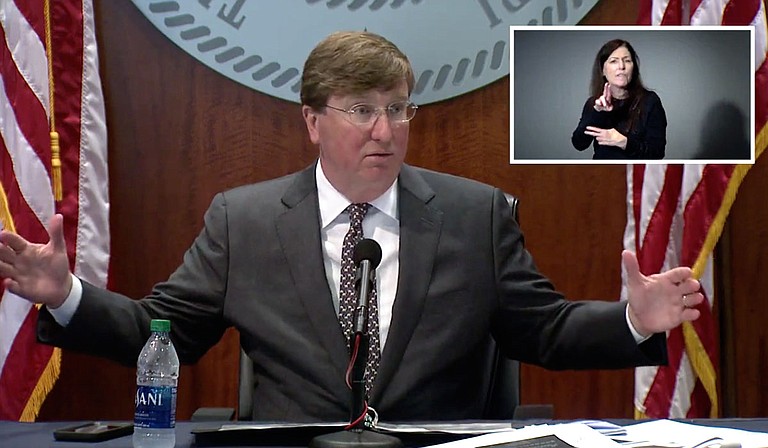 In response to increased spread of COVID-19, Gov. Tate Reeves has issued mask and gathering restrictions for nine counties with heightened rates of viral transmission. Photo courtesy State of Mississippi

Gov. Tate Reeves reinstated a mask mandate and other restrictions in nine Mississippi counties yesterday, in the wake of a sharp uptick in transmission of COVID-19 across the state and nation. The counties affected include Chickasaw, Claiborne, DeSoto, Forrest, Itawamba, Jackson, Lamar, Lee, and Neshoba, where indoor gatherings are now limited to 10 people and outdoor gatherings limited to 50. The executive order also mandates masks indoors and for public interactions where social distancing isn’t possible.

“We’ve seen this movie before,” warned Gov. Tate Reeves at yesterday’s COVID-19 press conference. “We know what can happen if we allow this (pandemic) to get out of control. We want to be proactive to prevent that from happening.”

The order also mandates that the state’s hospitals must maintain a 10% reserve capacity for COVID-19 patients, leaving a buffer for the rising hospitalizations that previously followed increases in cases of infection. Hospitals incapable of providing that reserve are ordered to delay elective procedures.

Reeves resisted calls to reinstate the statewide mask order, which previously expired on Sept. 30, two weeks before the surge in new cases. The governor asserted the need to strike balance between public health and “the heavy hand of government.” Reeves cited Alabama and Arkansas as evidence that regional mask orders were superior to blanket mandates.

State Health Officer Dr. Thomas Dobbs acknowledged that, in conversation with several Mississippi churches, religious leaders have admitted that they “can’t tell parishioners to wear a mask,” after the end of the mandate, fueling concerns that religious and family gatherings as the holiday season approaches will speed up the spread of the virus.

Today, the Mississippi State Department of Health reported 730 new cases of COVID-19, and 31 deaths. Reeves has indicated that Harrison, Hinds, and Rankin counties are approaching the degree of spread that would trigger him to declare mask mandates in those areas.

In spite of the new orders, and the nationwide trends towards a new peak of viral transmission, the governor said he wouldn’t support expansion of early or absentee voting in response to the new spike, regardless of what impact those voting alternatives could have on reducing crowd sizes at the polls on Nov. 3.

Reeves cited Mississippi’s special elections, which drew over 30,000 voters to the polls in late September, as evidence that Mississippians could vote safely. In 2016, more than one million Mississippians voted in person on Election Day.

“We have distributed masks … to each county,” Reeves said, for the purpose of distributing to voters. Previously, the governor suggested that mandating masks at polling places was “unconstitutional,” an assertion Secretary of State Michael Watson expressed as well. Asked what specific provisions of law lead him to that understanding, the governor ignored the question.

"There seems to be this infatuation by some of you with making voting something it's not," Reeves complained after a raft of questions from the Jackson Free Press and other media outlets regarding election safety. The governor approximated Mississippi's average voting density at roughly 500 voters and six voting machines per precinct, translating that to seven people voting per hour across the state.

The Mississippi Free Press' William Pittman found that Mississippi precincts average 600 voters and slightly fewer than 4 voting machines each. Rankin, Madison, Lowndes, Jackson and DeSoto County all have over 1,000 voters per district, with 34 other counties averaging between 500 and 1,000. Moreover, it is unlikely that voting on Election Day on Tuesday, Nov. 3, will be uniformly dispersed through the day, rather, it will be clustered around the day's work schedule and breaks.