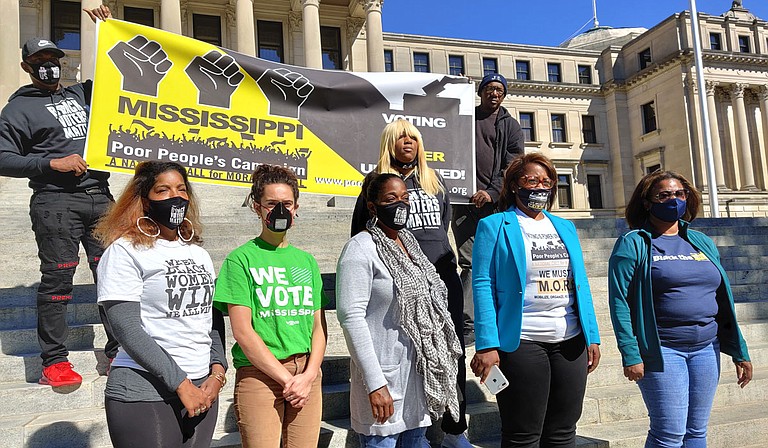 Election Day kicked off in Hinds County today with numerous challenges at the polls, including confusion for voters about where they should vote and conflicting information released by the State of Mississippi's polling locator and the Hinds County Election Commission about the location of the District 46 precinct.

The county's information was correct: District 46 voters were to cast ballots at the Christ United Methodist Church rather than the Ascension Lutheran Church where many voters lined up today due to faulty information on the secretary of state's poll locator.

The confusion also included a Jackson Free Press editor going to the Ridgeland Recreational Center rather than his new polling location at The Mark apartments, a problem revealed by the Mississippi Free Press last week, which the editor did not find out about until he had stood in line for some time.

Only one day before the long-awaited 2020 election, Danyelle Holmes, national organizer for the Mississippi Poor People’s Campaign, stood beneath the dome of the state capitol with a warning for voters and election officials alike about situations like the move of more than 2,000 mostly Black and brown voters to much-smaller The Mark precinct without proper notice or explanation.

“For 65,000 voters, (Election Day) is in jeopardy for lack of knowing their polling location, lack of transparency, and actions taken by circuit clerks’ offices and election commissioners,” Holmes said.

Those 65,000 voters, scattered across 55 Mississippi precincts, will be voting at a new location than in previous elections. Secretary of State Michael Watson released a list of polling-place changes last week that left off dozens of polling-location changes, saying later those precincts failed to report those changes to him. The faulty and incomplete information potentially threatened the vote of thousands of Mississippians.

For Holmes and many of the other organizers at the Monday event on the capitol steps, the unannounced polling-place changes are just another injury to universal franchise in Mississippi, which they say have severely eroded since the Voting Rights Act of 1965.

“We come here to say enough is enough. We will not tolerate voter suppression. We are here to take action. This cannot go on,” Holmes said.

Nsombi Lambright, executive director of One Voice, a progressive nonprofit and advocacy group, said her organization has partnered with the Mississippi NAACP to lead “voter protection efforts,” including a toll-free hotline for Mississippians seeking information on voting, including specific polling-place locations.

Voters experiencing any intimidation or threats at polling places may also call the hotline at 1-888-601-8683.

Rukia Lumumba, founder of the People’s Advocacy Institute, urged Mississippians who encounter difficulties casting their ballot on Tuesday to vote by affidavit ballot, a provisional vote that will be counted if the voter in question is not on the rolls due to an error on the part of the election officials, or if they need additional time to secure voter ID.

On Election Day, Nov. 3, registered voters may cast their ballots from 7 a.m. to 7 p.m. Voters who arrive and queue up to vote before polls close cannot be turned away, even after 7 p.m. Voters must bring a valid form of identification to vote. Acceptable examples of ID include driver’s licenses, state ID cards, passports, student ID provided by an accredited Mississippi college or university, and other forms of state-issued ID.

Voters who arrive at the polling place without a valid form of ID may still vote with an affidavit ballot. They must then return to the circuit clerk’s office within five business days with a valid form of identification for their vote to be counted.

At a press event today, Secretary Watson told the press that no statute required election officials to inform his office of polling-place changes. “Clerks and commissioners will change that in SEMS (Statewide Elections Management System) and send out notices.” But, Watson added, “If there are boundary changes,” meaning redistricting, “that does require notification to our office.”

Though some polling locations on the Gulf Coast lost power as a result of Hurricane Zeta, the secretary of state reported today that all districts are back on the grid and ready for tomorrow’s contest.

Watson warned that voters in Mississippi are prohibited from taking a photo of their marked ballots. Voters may not enter a polling place with campaign-related clothing or hats. Campaigners must remain 150 away from polling places.

Watson also confirmed that curbside voting will be available for anyone experiencing COVID-19 symptoms. This includes headaches, fever, coughing, throat or muscle soreness, or loss of smell.