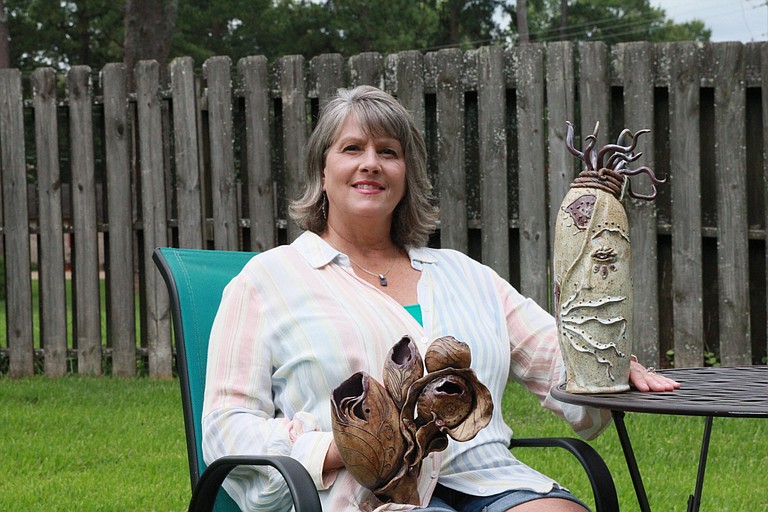 This week, potter Debi Lane attempted to create a phoenix, but the glaze ran, and the Mendenhall resident was forced to scrap the project.

“I learned something, though,” she said of the phoenix in its ashes. That mantra has served her well for 10 years, as Lane is a self-taught sculptor. “Living in the country, there’s not a lot of places to go to classes, but one year I decided to get a wheel and try my luck.” 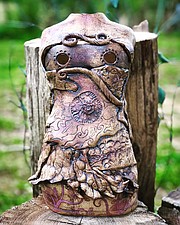 A visual learner, Lane said that she primarily taught herself through Youtube videos, particularly those that provided a close-up of the artist’s hands. This helped her learn the proper techniques to keep clay centered on the wheel. “After much cursing and gnashing of teeth, I finally got it right,” Lane laughed.

Lane’s journey to the potter’s wheel was unorthodox, as she was born and raised in the small town of Prentiss, Miss. At 15, the artist accompanied her mother to Charlotte, N.C., where she lived for 15 years before returning to Mississippi.

“Outside of my mom, all of my immediate family lived in Mississippi. My grandparents were here, and I loved them immensely. They were the closest people to me,” Lane said of her move back to the Magnolia State.

Even after her grandparents’ deaths several years later, Lane continued to homestead in Mississippi, working as a realtor and marrying her husband, Mike Levins.

This year, however, Lane left real estate behind entirely to focus on her art. “I’m not a production potter, so unless it’s a mug or something like that, it’s one of a kind.”

Creating such unique pieces is a complex process that Lane says begins in her notebooks. “When a shape or a basic idea comes to my mind, I sketch it out,” she said, remarking that the sketches themselves are merely a rough outline of the more involved work that she does later in the process.

After forming the clay, she fires it in a kiln, the temperature of which can exceed 2,000 degrees Fahrenheit. After firing a piece, it must be cooled to 200 degrees before it can be removed, which can lengthen the pottery-making undertaking to several days. “Most people have no idea how involved the process is,” Lane observed. 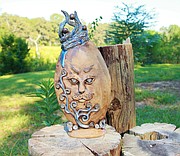 Lane’s own process is complicated by the fact that she currently operates her business out of a remodelled barn on her property, but she would not have it any other way, claiming that she finds her inspiration in the natural world. “We live on 15 acres, and there’s lots of peace and quiet.”

One such bolt of inspiration came to Lane in an interesting form: a peacock. Initially, Lane did not want to bring that particular idea to life, stating that she did not feel that she had the skillset to produce such a complex work of art. Eventually, Lane mustered her courage and started work on the piece.

“It was the scariest thing in the world, even though nobody was watching me,” she said. Her bravery paid off, as she now cites the peacock as her favorite piece to date. A fan agreed and purchased the piece, and it now has a new home in Sweden.

Eventually, Lane says that she and her husband long to travel the country in their RV, which Lane says would only expand her ability to draw inspiration from nature as a travelling artist. “Most people want to see tourist attractions, but we want to see the mountains,” she remarked.

One thing’s certain: no matter where she goes on her travels, Lane will see the beauty in nature—and then endeavor to bring it to life through her art.

View or order Lane’s work through her business page on Facebook.