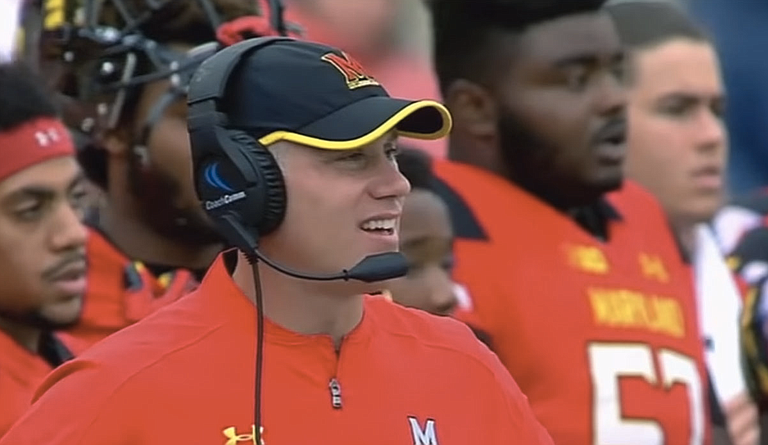 The University of Mississippi's new assistant football coach, D.J. Durkin, was part of a toxic and dangerous team culture at the University of Maryland, where player Jordan McNair died after a practice in summer heat. Screenshot courtesy ESPN

University of Mississippi Athletics Director Keith Carter announced the hiring of D.J. Durkin, former head coach at the University of Maryland, as the football team's new assistant coach on Jan. 3. Durkin's hiring raises important questions for the sport of college football: Are there any consequences for elite, white men in positions of power? And just how low are we willing to stoop to help them redeem themselves?

The tragic death of former player Jordan McNair will forever mark Durkin's time at the University of Maryland. In late May 2018, following a series of 110-yard sprints with his teammates in the summer heat, 19-year-old McNair began to seize before collapsing on the practice field.

An independent investigation found that team coaches and staff delayed calling 9-1-1 for more than an hour, and failed to administer aid or assess McNair's vital signs. Nearly two hours passed before McNair was admitted to an area hospital, where records show his body temperature had climbed to 107 degrees. McNair fell into a coma at the hospital, and died June 13.

Shortly after McNair's death, an ESPN investigation detailed "a coaching environment based on fear and intimidation," "extreme verbal abuse" that included "belittling, humiliation, and embarrassment" of players, and physical abuse including forcing a player to overeat until he vomited.

Following the report's release, D.J. Durkin was placed on administrative leave, and University of Maryland President Wallace Loh appointed an independent commission to investigate allegations of a toxic culture within the school's football program. Released in October 2018, the commission's 192-page report rejected the presence of a toxic football culture by claiming that they failed to find consensus among current and former players and staff regarding players' treatment. One has to wonder if this commission has ever heard of Stockholm syndrome where kidnapping victims can feel affection or trust for their captors.

Despite its denial of a toxic culture, the commission's report corroborated ESPN's findings. One former player described to the commission a football program "based on fear," while another player stated Durkin "should never get another coaching job. What he put us through is disgusting." Durkin himself proudly admitted to separating his players as pack or prey, and encouraging his staff to tell under-performing players "you are a fraud piece of junk." Following the commission's report, Durkin was briefly reinstated before being fired just one day later due to widespread media and public backlash.

In his statement to the press on Durkin's hiring, Carter claimed a "thorough background check" produced "consistently strong feedback about Coach Durkin's strong character and work ethic and his positive impact on the communities and institutions where he was previously employed."

It is difficult to reconcile Carter's statement with what is publicly known about Durkin's regime at Maryland, including the extent of its responsibility for McNair's death. It is doubtful that Carter or anyone else involved in Durkin's hiring spoke with or took seriously Jordan McNair's father, who in an interview following his son's death told ESPN, "I don't think that he should be allowed to coach anyone else's child."

Nor is it likely Carter or anyone else spoke with former Maryland players and staff who described a climate in which players were "routinely the targets of obscenity-laced epithets meant to mock their masculinity when they are unable to complete a workout or weight lift."

And nobody at the University of Mississippi seems to have considered that whatever impact Durkin had on the communities and institutions he previously served must include Jordan McNair's death. What the University of Mississippi's hiring of DJ Durkin ultimately says is that Jordan McNair's death doesn't matter, or at least not as much as Durkin's opportunity for a second chance.

Indeed, some have already claimed Durkin's brief absence from college football was punishment enough, and that Durkin is now worthy of redemption. Yet there is no evidence of Durkin publicly owning his part in McNair's death (he was at the workout), nor has Durkin made any form of restitution toward McNair's family and former teammates. Under the terms of his previous contract, Durkin will collect nearly two-thirds of his $7.8-million deal. That's not a punishment; that's a gross injustice.

The University of Mississippi and others claiming Durkin deserves a second chance emphasize Durkin's humanity while at the same time ignoring McNair's. McNair's death is rendered tragic only for how it affects Durkin's fall from grace, and subsequent rise. Durkin's fate becomes less tied to McNair's death as it should be, and is instead tethered to Durkin's ability to move past it.

Redemption for DJ Durkin reduces Jordan McNair, a young, black man and kinesiology major who had his entire life in front of him, to little more than a lesson learned. In a sport where predominantly black players are routinely and brutally exploited so that predominantly white coaches can remain multi-millionaires, this twisted logic is far too common.

It is no secret that big-time college sports are far more interested in revenue than they are in the predominantly black players who generate it. That makes it no less shameful when schools like the University of Mississippi offer absolution to the men whose success always comes at such great cost to those players. May Jordan McNair's memory forever be a blessing, and may his life and death follow D.J. Durkin wherever he goes.

James M. Thomas (JT) is an associate professor of sociology at the University of Mississippi. He is the author of four books and more than 20 peer-reviewed journal articles, book chapters, and other essays on the causes and consequences of racism in America and abroad. JT can be reached at [email protected], or on Twitter @Insurgent_Prof.