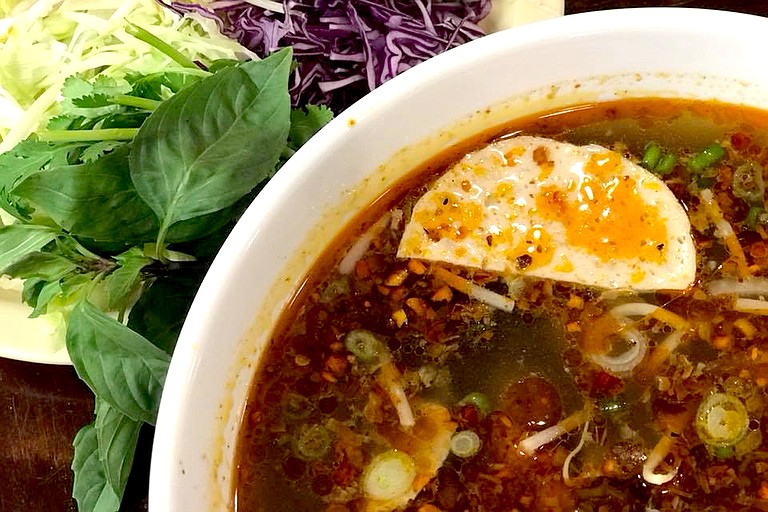 Sisters Thoung and Lily Hong ladle noodles into a beef bone broth, which they have seasoned with ginger, white onions and star anise and then simmered for nearly 24 hours. They place meat on top and add fresh vegetables. The end product is pho, a Vietnamese soup with broth, rice noodles, herbs and meat.

Pho Huong opened in Ridgeland in October 2017 after the Hong sisters decided that the area needed more diverse restaurant choices.

"We felt there was a need for good Vietnamese food in that area, and there was none. We thought, 'Why don't we open one (here) if there is an opportunity?' and it came," Thuong, who goes by Tiffany, says.

She says the restaurant being on Old Canton Road lends well to the area's  diverse cuisines, including Mexican, Greek,  Chinese, Italian and now Vietnamese.

Family support in the restaurant is a big factor to the Hongs, who not only have relatives who help with the  preparation and plating of the dishes but who have also given the location  a special name.

"It's a family-oriented restaurant, so we all help each other out in the kitchen," Tiffany says. "And (we opened) about a year after our mom passed, so our  restaurant is my mom's name, Huong."

Pho Huong hosts Sunday specials that include special soups such as seafood noodle, which is a pork broth served with egg and rice noodles, pork, fish, squid, shrimp and scallions, and topped with fried garlic and shallots; and beef stew, which is made from simmering a side of beef with grounded white onion and lemongrass, and later adding white onions and carrots. Guests can choose from rice or egg noodles to go with the dish. Sundays also feature traditional desserts such as Vietnamese  banana pudding, which is rice pudding made with Thai bananas, coconut milk, crushed peanuts and tapioca pearls.

Pho Huong also gives back to the community. Proceeds from a recent T-shirt sale went toward purchasing supplies for Kirksey Middle School in Jackson. The campaign yielded such a favorable response that the restaurant also began to collect donations to pass on to community and school partners.

"I want to be able to help and to give back to the community also. My mom (stressed) doing good and giving back if you're able to," Tiffany says. "I think our community needs more of that. In the future, I plan to do more myself and get together with small businesses to do a  small give-back."

Tiffany Hong says about Pho Huong: "Hopefully, this will open more doors for people who have not tried  Vietnamese food yet. Bigger cities are very diverse, so I hope to bring some of that diversity to Ridgeland."

Pho Huong (6547 Old Canton Road, Ridgeland) is open Tuesday through Thursday and Sundays from 11 a.m to 9 p.m., and  Fridays and Saturdays from 11 a.m. to 10 p.m. For more information, find the business on Facebook and Instagram.