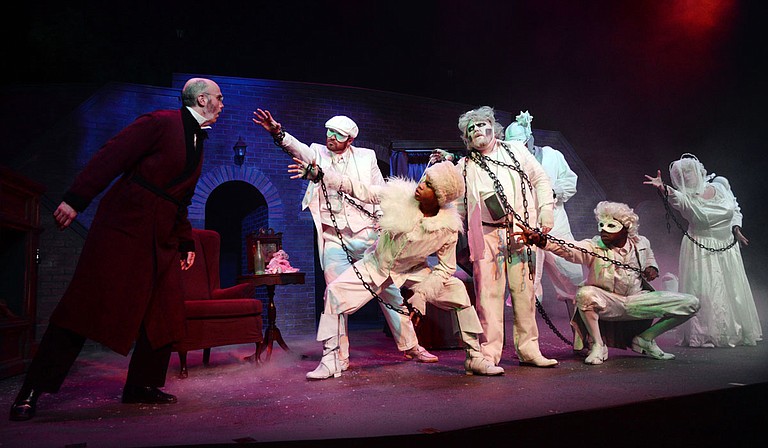 New Stage Theatre presents a performance of “A Christmas Carol” through an adaptation by playwright Michael Wilson. Photo by Greg Campbell

For people around the world, Charles Dickens' classic "A Christmas Carol" is a familiar, heartwarming story. Jackson metro residents will have an opportunity to spend some time with Ebenezer Scrooge, Bob Cratchit, Tiny Tim, Jacob Marley and the ghosts of Christmas Past, Present and Future as they experience the holiday favorite live this season.

New Stage Theatre presents regular showings of "A Christmas Carol - A Ghost Story of Christmas" starting Dec. 5. The family-friendly performance features a swirling chorus of characters who dance and sing while retelling the tale of redemption, magic and hope. The production will mark the 24th season that New Stage has produced the play, as well as the fifth adaptation of Dickens' original work the theater has performed.

"We are increasing certain aspects of the play. We have a new set and a new costume designer," Reynolds says. "We've added a lot of sound effects and added or increased a lot of projection effects like the snow, ice, fog and ghosts." Reynolds says she hopes the improvements not only provide a more enjoyable experience, but also highlight New Stage's dedication to bringing quality performances to the stage.

"I hope the audience leaves knowing that we are a professional theatre and that we produce all our shows (while) doing a good job artistically, each year of raising the level of artistry in our community and raising it for ourselves," Reynolds says.

The cast is comprised of 18 adults and 14 youth characters. Crumbley, who has been in preparation for the role for four months says he is excited for the opportunity to perform the role again.

"I am particularly fond of 'A Christmas Carol,' both the book upon which the play is based and the play itself," Crumbley says. "I really like this particular script by Micheal Wilson. I think of it like a real roller coaster ride. It's got a really strong pace. At times, there is a lot of humor in it in addition to all the thrills and feels that come with the ghost story aspect of it."

Hartfield, who is 9 years old, will star as Tiny Tim. The youngest member of the cast says he hopes all will enjoy experiencing the show as much as he does performing it.

"It's a very good show. It has lots of (effects) like the ghosts," Hartfield says. "It is a lot of fun."

Reynolds notes that although there have been some changes and additions to the performance since last season, the message of redemption and selfless giving the timeless classic offers has not changed.

"The most important thing is that the story that a lot of people already know the ending to still moves them to go out and have a good holiday season and to think of those things that can change our hearts for the better," Reynolds says.

"I think that's the reason we do "A Christmas Carol."