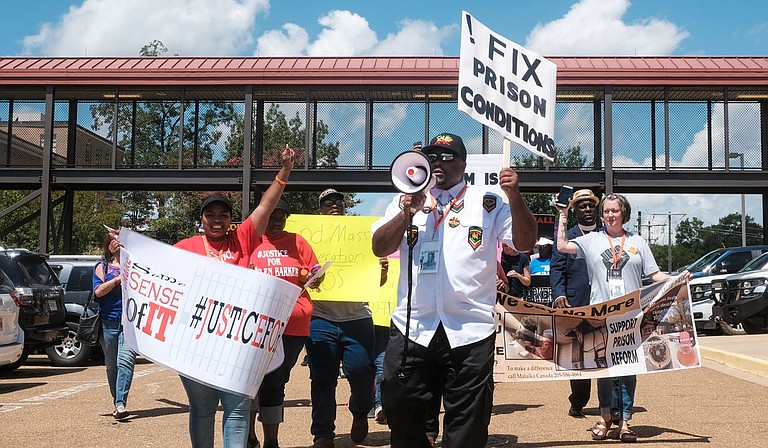 At a mass incarceration rally in Brandon, Miss., on July 29, family, friends and community members marched to end practices that they say incarcerate far too many people for far too long, often for nonviolent crimes. Photo by Ashton Pittman.

According to the Bureau of Justice Statistics, Mississippi is still suffering through a mass incarceration crisis despite the state's recent efforts at reform. The current imprisonment rate is 57% higher than the national average and Mississippi's prison population has increased from 17,876 in 2014 to 19,306 in 2018.

The Mississippi Prisoner Advocacy, established September 2017, is a registered nonprofit corporation that supports and advocates for prisoners and their families, educates them on the ins and outs of the Mississippi Department of Corrections and provides the tools needed to aid progress in the state. This organization believes that incarceration has a severe, damaging impact on the state and society, which demands reform now. The group also believes that restorative justice and effective rehabilitation strategies should be required in the state of Mississippi.

On Saturday, Nov. 23, from 10 a.m. to 1 p.m., the Mississippi Prisoner Advocacy invites the community to join together for a rally focused on bringing awareness to and protesting against mass incarceration in Mississippi. The rally will take place at Smith Park (302 E. Amite St.) and will cover various platforms of injustice such as harsh sentencing, forced plea bargains, juvenile life without parole sentencing, the war on drugs, the retroactivity of 585, cash bail, prison for profit and inhumane living conditions. The Mississippi Prisoner Advocacy calls out to all activists, community organizers, lawyers, clergy and families directly affected by Mississippi's broken prison system to come out and be heard. This event is a peaceful gathering and no violence, profanity, property damage or law breaking will be condoned.

For more information on the event, find it on Facebook. To learn more about Mississippi Prisoner Advocacy, call 601-909-5549 or send an email to [email protected].