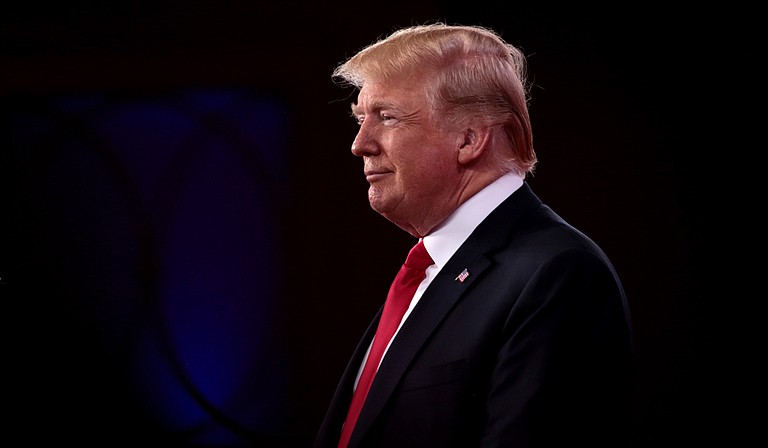 A federal judge on Monday dismissed President Donald Trump's lawsuit against New York officials that was aimed at preventing the release of his tax returns. Photo by Gage Skidmore

WASHINGTON (AP) — A federal judge on Monday dismissed President Donald Trump's lawsuit against New York officials that was aimed at preventing the release of his tax returns.

Judge Carl Nichols handed down a 19-page ruling, finding the U.S. District Court in Washington, D.C., does not have jurisdiction to hear the case.

Trump sued New York's attorney general, tax commissioner and the House and Ways Means Committee in July, seeking an injunction to block the application of a New York state law known as the TRUST Act that could allow the Democratic-controlled House to obtain the tax returns.

The House committee and its chairman, Rep. Richard Neal, D-Mass., have not requested Trump's New York state tax returns. But the lawsuit was filed preemptively, citing concerns that the panel could use the TRUST Act to try to procure Trump's state returns.

Trump has refused to release his tax returns since he was a presidential candidate and is the only modern president who hasn't made that financial information public.

The TRUST Act, which was signed into law in July 2019, allows state officials to access the tax returns of certain government officials, including the president, if the tax returns are requested by a congressional tax committee and have been requested for a legitimate legislative purpose.

New York officials had argued that the court in Washington did not have appropriate jurisdiction in the case but agreed to delay acting on any congressional request for Trump's tax returns until there was a ruling on the jurisdictional issue.

"Based on the current allegations, Mr. Trump has not met his burden of establishing personal jurisdiction over either of the New York Defendants," Nichols, a Trump appointee, said in his ruling.

Trump's attorney, Jay Sekulow, said he was reviewing the ruling.

Trump could refile the lawsuit if the House committee makes a formal request for his tax returns or could file a similar lawsuit in another court. Trump's attorneys had also filed a motion with the court in late July to prevent the disclosure of his state tax returns while the legality of any potential request for the president's tax returns was litigated. That portion of the case remains ongoing.

New York's attorney general, Letitia James, said in a statement that she was "pleased with the court's conclusion."

"The TRUST Act is an important tool that will ensure accountability to millions of Americans who deserve to know the truth," James said. "We have never doubted that this law was legal, which is why we vigorously defended it from the start and will continue to do so."

The House Ways and Means Committee has separately sued the Trump administration in federal court for access to Trump's federal tax returns as part of an investigation into the Internal Revenue Service's audit program and tax law compliance by the president. The committee had sought Trump's personal and business returns for 2013 through 2018.

In a separate case, a federal appeals court ruled earlier this month that Trump's tax returns can be turned over to New York prosecutors by his personal accountant in response to a grand jury subpoena.