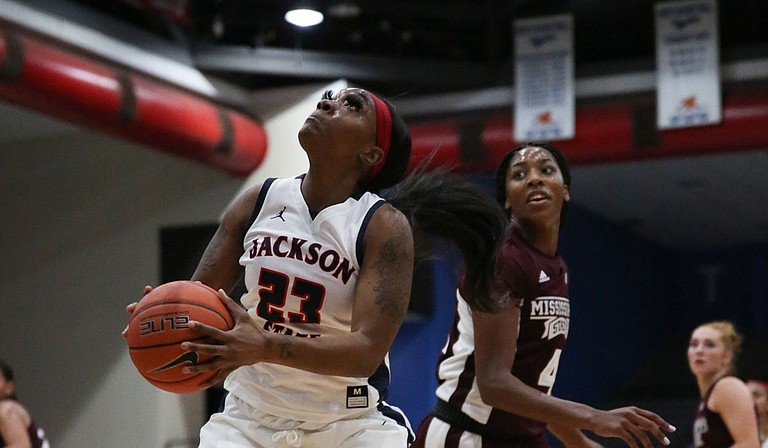 Mississippi State University keeps rolling as a powerhouse in women's college basketball. The Bulldogs lost in the regional final of last year's NCAA Tournament to miss out on a third straight Final Four.

MSU is back to a fast start with a 9-2 record with the losses coming in back-to-back games to the University of Stanford and University of West Virginia. This season MSU didn't have a player picked to either the First-Team or Second-Team All-SEC in the preseason. Sophomore forward Jessika Carter leads the team in scoring with 14.7 points for ninth best in the SEC.

Even in the tough SEC, the Bulldogs will be in the mix for an NCAA Tournament high seed. MSU is ranked 15th in the current top-25 with plenty of time to move up the rankings.

The Rebels went 9-22 last season, and there is progress on the rebuild this season as the team currently is 6-5. Last season at this point in the season, Mississippi was 5-6 and didn't get above .500 the rest of the season.

Junior guard Deja Cage leads the team in scoring with 13.7 points per game for 13th best in the SEC. No other Rebel player ranks in the top-25 in scoring in the conference. This young team might need to give Cage more help as the season goes along.

The Rebels were picked to finish 13th in the 14 team SEC but the Rebels might surprise some and with luck and health finish better than projected. There might not be an NCAA Tournament bid this season, but UM is building toward the future.

It wasn't a pretty start to the season as the University of Southern Mississippi was taken behind the woodshed by Mississippi State in the second game of the season. After that loss the Golden Eagles have gone 7-1 the rest of the way with a loss to Tulane University.

USM women were picked to finish eighth in the preseason but these Golden Eagles could be a surprise in C-USA. This team reached a lower tournament last season and could be an NCAA team this season.

Jackson State University began the season 1-7, a rough start. The Tigers have rarely been in close games in those seven losses.

The lone bright spot for JSU has been senior forward Marneisha Hamer as the Preseason First-Team All-SWAC selection is second in the conference in scoring with 14.8 points per game.

The Tigers will have to win the SWAC Tournament to get into the NCAA Tournament. That means the slow start won't hurt JSU right now, but the team needs to begin to turn things around before conference play starts.

Belhaven University is off to a fast start as the team is off to a 7-1 start. The Blazers were picked to finish last in the American Southwest Conference Eastern Division in the preseason and are better than expected or feasting on weak foes.

The Blazers might be beating bad teams but this team could be putting everything together this season. When conference play starts it will show if Belhaven is a contender or pretender.

As the Majors are set to begin conference play, the team is at .500 with a 5-5 record. Two of the three loss for Millsaps College have come in overtime games. If those games went in favor of the Majors, the team would have a winning record.

If the Majors can get more scoring help for Fortenberry and Manning, this team could be in the mix later in the season. If the scoring stays the same, Millsaps will be at the middle or bottom of the conference when the SAA Tournament starts.

Tougaloo College is on a five game losing streak at this moment and are 3-10 overall to begin the season. The Bulldogs are 0-8 on the road, 1-2 at home but 2-0 at neutral site games.

Scoring is a major concern for the Bulldogs. Just junior guard Amari Pittman is scoring in double-digits with 11.5 points per game for 16th in the Gulf Coast Athletic Conference. No other player on the roster is scoring more than seven points per game.

If the Bulldogs can't increase the team's scoring as a whole, it doesn't look like much will change for the squad. If the scoring goes up as a team, this squad could turn things around in conference play.

The Braves started the season 0-4 but somewhat righted the ship by winning four of their next seven games. Currently Alcorn State is 4-7 on the season as the team gets ready to start conference play.

ASU is figuring out how to win even as Preseason Second-Team All-SWAC junior center Jamaysha Bernard is averaging just 2.8 points to start the season. Picking up the scoring load is junior guard LaRea Roscoe and Jada Hargrove are both averaging 11.7 points per game and tied for ninth in the SWAC in scoring.

Just like JSU, Alcorn State path to the NCAA Tournament is by winning the conference tournament at the end of the season. If Bernard can get going and Roscoe and Hargrove keep going at their current pace, there is hope for ASU to go dancing.

The Choctaws were picked to finish 11th in the conference this preseason. Mississippi College is 5-4 overall and 2-1 in GSC play to start the season a good start in conference play.

Mississippi College doesn't even have one player with a scoring average in the top 15 or top 20 of the conference. It does have three players ranked 21st to 25th in scoring which gives MC a chance to improve.

If the Choctaws can get one player to break out as a scoring threat each time down the floor and role players step up this team could exceed projections.

Even exceeding projections might not mean this team ends up in a postseason tournament.

Delta State University is 7-1 overall and 1-1 in the Gulf South Conference to start the season. The Statesmen were picked to finish fourth in the preseason projections and could still end up better as the season is still early.

DSU is getting a strong start from Preseason All-GSC senior guard Nia Johnson who is ninth in the conference in scoring with 14.7 points per game. Johnson needs to get more help from Preseason All-GSC senior forward Quantesha Patterson who is averaging just 11.5 points per game. Johnson and Patterson could lead the Statesmen to a post-season berth. DSU is off to a good start and could set themselves up for a high seed in the conference tournament.

The Delta Devils are off to a tough start as the team is currently 1-8 to start the season. There have been few close games including a 22-95 loss to the University of Wyoming.

If the Delta Devils want to go dancing they might need even more out of Cotten and Thigpen. Winning the conference tournament will send MVSU dancing.